We test two versions of the hybrid Lexus flagship This is not your grandmother's gold Lexus LS. It's not your other grandmother's hybrid, either. The 2020 Lexus LS 500h represents the biggest step forward in terms of driving dynamics, style and pure luxury for a model line that has largely been known for dependability and craftsmanship. It should satisfy those elements too, but now, there's a lot more to tickle the right side of the brain.

We got a chance to sample two different LS 500h versions: one blue, one red; one with a $12,250 Luxury back seat package, one without; one in Oregon and one in Michigan. The blue car hit the register with a sticker of $107,355, including enhanced accident avoidance tech, an adaptive air suspension, 20-inch wheels, a massive head-up display, a 23-speaker Mark Levinson system, and a few trim upgrades. The red car was similarly equipped apart from optional 19's and swapping a $3,730 Interior Upgrade package that basically has the same front seat and trim upgrades as the $12,250 Luxury package, but leaves the back seat be. Both provided far more equipment for the money than the German competitors would. Senior Editor, Green, John Beltz Snyder: I already miss the Matador Red LS 500h we had in Michigan. I had it for a full week and genuinely enjoyed it. It's a hybrid, and a really good one, providing efficiency when you want it and plenty of power when you need it. I found all the modes genuinely useful. Normal is well balanced. I used Eco when I was stuck in traffic to safe fuel. The Comfort mode helped keep my carsickness-prone wife happy when we ran around town together. Sport is very satisfying, but not so hardcore to make it a niche use case. Sport+ is the best way to enjoy the lovely song of the 3.5-liter V6, but still wasn't so extreme to relegate it to the briefest moments of passionate driving. Once I got used to the placement of the mode selector — on the right of the instrument cluster housing, which helps keep your eyes forward — I made good use of it.

The LS hybrid has that trick transmission — a magical union of CVT and four-speed automatic — as part of the Multi-Stage Hybrid System that won our Tech of the Year award as tested in the Lexus LC 500h back in 2018. It's a sweet complement to the soulful V6 underhood, and provides a nice experience when left to its own devices or when using the paddle shifters to switch among 10 effective gear ratios. It works quickly, smoothly, and efficiently all at once.

The other tech in this car is swell, too. I don't mind the Remote Touch touchpad interface too much; at least I prefer it to the fidgety mouse thing other Lexuses use. I wish some things had hard buttons, like the seat heat controls, but the most important functions don't require diving into menus: Adjusting climate control, switching media, volume control, track selection, drive mode selection, and turning the head-up display on or off.

My family spent a fair amount of time in the car with me. The rear seat legroom is immense, giving my large son plenty of room to swing his long legs around. Installing a car seat was easy, as was getting Wollie into it. I feel like the rear accommodations do require a sacrifice up front. The front seats, even when all the way down and moved pretty far back, mean your head is pretty close to the headliner from the sloping of the roofline. It's not hard to hit your head getting in, too. It's a small price to pay, and a livable one, not bad enough that I'd pass over this car, end the rest of the package more than makes up for it. 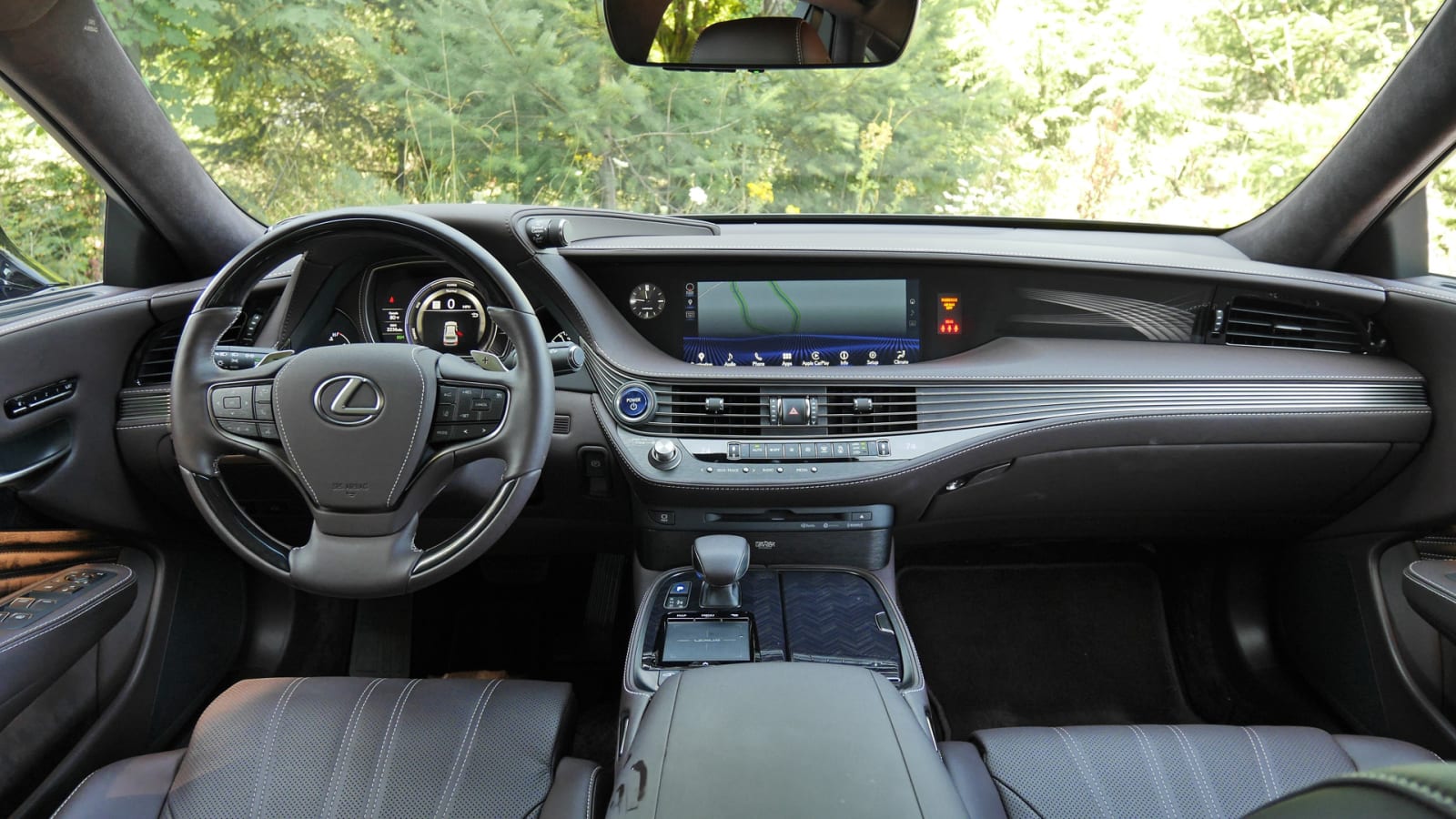 West Coast Editor James Riswick: The LS 500h I drove for a week in Oregon was an exquisite shade of blue with a rich brown interior accented in a modern herringbone trim. It's a car that looks and feels special. It was certainly more so than the BMW 740i I drove the week prior, which carried virtually the same price tag. The Lexus also had more toys, especially in its palatial back seat with its 18-way adjustability, heating, and a 7-inch touchscreen controller that come with the $12,250 Luxury package.

However, it was actually the driving experience that made the LS 500h shine so brightly. There is a feeling of connectivity to the road in the LS that's not present in the 7 Series anymore (and certainly not in an S-Class). This wasn't an F Sport model, which can't be paired with the 500h, yet it still had a buttoned-down feel almost more in keeping with a Jaguar XJ (and 7 Series of the past). It feels so much smaller than it is and didn't seem out of place on a winding road. The test car in question had the $1,500 adaptive air suspension, but unlike the system in the 740i, it didn't feel "airy" with the subtle lateral bobbing indicative of such things. The sharp steering helps too, as it demonstrates reactive turn-in and consistent effort throughout. The differences in Comfort, Normal and Sport are minimal. When in Normal around town, it's not all light and numb like the 740i, making you feel connected to the car even when puttering around. Seriously, put people behind the wheel of both the BMW and Lexus, disguise the badges, and I bet most would assume the Lexus is in fact the "Ultimate Driving Machine."

That it's a hybrid is even more impressive. It does a very good job of disguising its hybridness, especially when driving with vigor. Throttle response is well-calibrated (even Comfort mode doesn't make things all inert and squishy), and as Snyder noted, you actually get some nice engine song piped into the cabin. The snarl is certainly not something you're expecting from a big Lexus hybrid sedan with an executive back seat package. Acceleration doesn't take your breath away, but even if it's slower than the turbo-V6 LS 500, it doesn't feel slow and I wouldn't hesitate to choose the hybrid.

This really was one of the most surprising cars I drove in 2019, and indeed, one of the best, period. 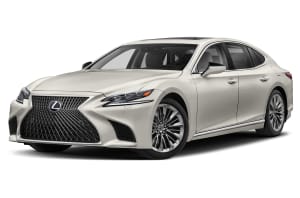