Air taxi and autonomous shuttle meet at the S-Hub 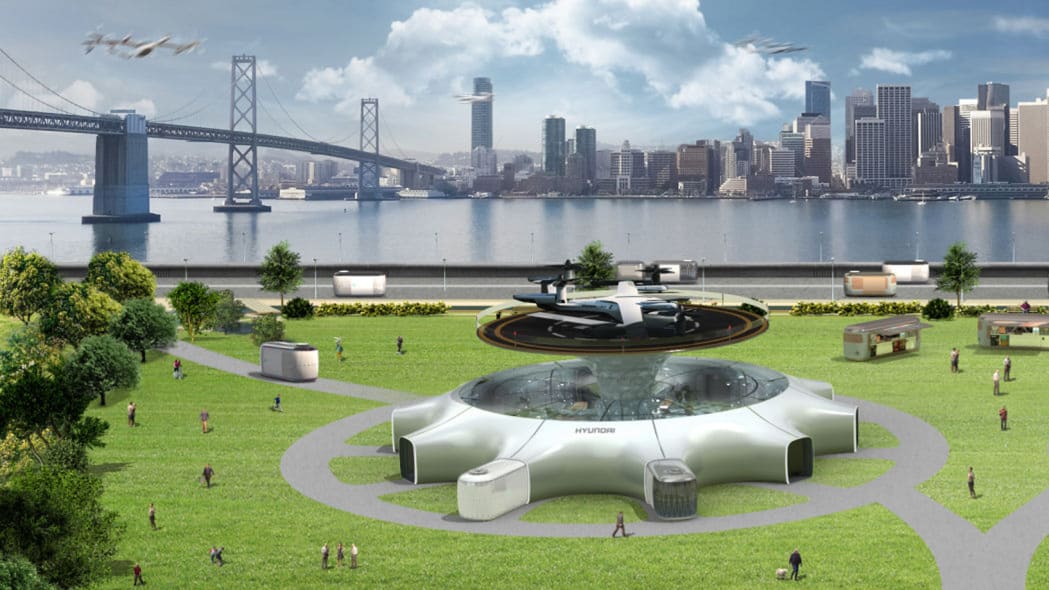 Last September, Hyundai snagged 30-year NASA veteran Dr. Jaiwon Shin to take an EVP role in charge of the automaker's new Urban Air Mobility (UAM) division. Shin, who had run NASA’s Aeronautics Mission Research directorate, would help Hyundai secure a leading position in the highly anticipated world of flying cars by developing core products and technologies. In December, Hyundai announced a $52 billion investment in Strategy 2025, part of which would focus on smart mobility devices and services. At CES today, Hyundai's brought a glimpse of its vision for smart mobility working together in a smart city, with the S-A1 personal air vehicle, S-Link purpose-built vehicle, and S-Hub landing and docking space where the two come together.

Collectively called the UAM-PBV-Hub, the goal for the mobility system is "to free future cities and people from constraints of time and space and allow them to create more value in their lives."

The S-A1 is more urban air taxi than personal air vehicle, seeing that it seats four passengers and a pilot. The pilot's a temporary provision until autonomous technology can fly the S-A1 without human help. Developed with Uber Elevate and fully electric, it uses multiple small rotors for quieter operation and redundancy, with a parachute system providing backup in case of emergency. It's been designed to fly between 1,000 and 2,000 feet high at speeds up to 200 miles per hour, Hyundai estimating that the UAM can shrink a two-hour car commute to 10 airborne minutes. For now, range is 60 miles.The Hyundai-Uber partnership could see Hyundai build the vehicles, while Uber takes care of interfaces, software back-end, airspace support, and connections to ground transportation.

The S-Link is another autonomous, open-plan, wheeled container that can be built up into any kind of environment for hauling citizens to-and-fro; Toyota mentioned the same tech for its Woven City, and Rinspeed brings a riff on this tune to Geneva every year. With modular upper and lower bodies, and variable lengths from 13 to 21 feet, the S-Hub can be decked out as anything from a hotel room to a medical clinic or restaurant. Artificial intelligence chooses the most efficient routes through the city of the future, the pods can be charged on the go with "charger PBVs," and the S-Link can travel in platoon. When gathered at the S-Hub depot, Hyundai says they can be connected to form larger gathering spaces such as museums, concert halls, or an entire medical complex.

The flying taxi and the self-driving bus come together at the S-Hub, a space designed to "connect people to people and create new innovative communities." The networked mobility relay comes as the result of work by Hyundai's Human-Centered City Advisory Group, gathering "top global experts from fields such as psychology, architecture, urban design, transportation, and political science, [for] research on how future cities should be designed to foster new human-centered values." Each step in the scenario presented at CES supports the three key tenets the advisory group built the future city on: vitalize, enable and care.

CES visitors can take a virtual reality ride in the S-A1, and check out two life-sized S-Link shuttles at Hyundai's booth.