The 8 of 8 models get special badging and early delivery

In October, BMW divulged a smattering of information on the M8 Gran Coupe First Edition. Just 400 units would be built for world consumption, all in Competition spec, meaning 617 horsepower and 533 pound-feet of torque from the 4.4-liter twin-turbo V8. Production is scheduled to begin in March 2020, and only 50 examples will make their way to the U.S. Unwilling to wait another four months for the announced kickoff, however, M boss Markus Flasch got in front of the camera at the M Studio in Garching to announce an even more special subset of the First Edition sedans, called the 8 of 8. Rolled out in the same spec as the coming 392 First Editions, these differ only by virtue of being the first of the First Editions.

To mark their primogenesis, the octuplets get "1 of 8" badging laser etched into the B-pillars, plus a special "1 of 8" badge on the trunk, and script of "BMW Individual Manufaktur" placed on the rocker panels. The logo is further stitched into headrests and the custom floor mats, another "BMW Individual Manufaktur" stenciled onto the cupholder lid. Otherwise, they spec the same Aurora Diamond Green Metallic paint in obeisance to the 2018 concept car, with Bronze Gold accents on exterior trim and the 20-inch 20-inch M Star-Spoke forged wheels, yellow contour LEDs in the headlights, and a full Merino leather interior in Taruma Brown.

The 8 of 8 have are all bought and paid for — their prices unknown, since BMW hasn't released pricing for the 'regular' First Edition — headed to new owners in Belgium, England, Germany, Switzerland, Japan, Russia, Qatar, and the U.S. It's possible there remain build slots for the 'regular' M8 Gran Coupe First Editions; if interested, expect an MSRP north of the standard M8 Gran Coupe Competition, which starts at $146,995. 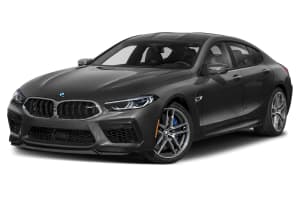