There's a new king of beasts in the Safari 911 segment 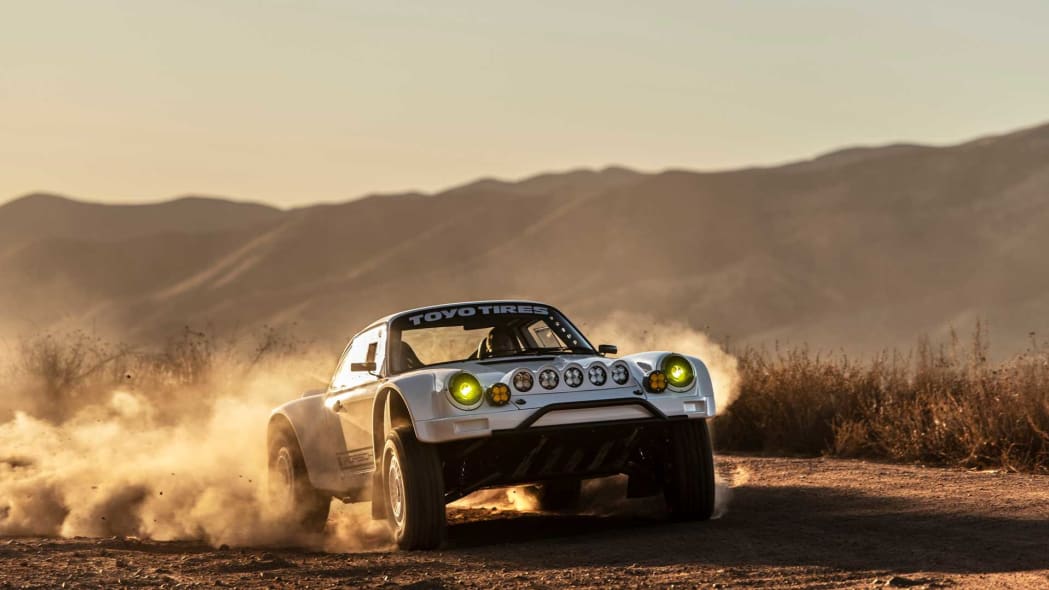 Just before the SEMA show we heard about ex-Singer fabricator TJ Russell whipping up his first solo creation, a safari-type Porsche 911 based on the 964 series. We got photos of the jacked-up jumper on the SEMA show floor, but those images couldn't show us what we were really dealing with. That's been corrected thanks to a photo shoot in the California hinterlands that puts Russell Fabrication's "off-road outfitting package" in its best light.

There's a 964-series 911 at the heart of this, the same way there was officer Alex James at the heart of RoboCop. Starting with a plain 964 body, Russell extends the wheelbase three inches and the track a humongous 14 inches. Structural towers fabricated from heat-treated 4130 chromoly tubing strengthen the front end, leaving original suspension points intact. The front suspension employs custom spindles, and billet 7075 aircraft aluminum upper A-arms, and box plate heat-treated 4130 chromoly lower A-arms that can work through 12 inches of travel with 2.5-inch, three-way adjustable coilovers. The rear suspension – also designed with the factory bolt-on locations – gets 13.5 inches of travel from three-inch, three-way adjustable coilovers, a buggy-style chromoly box plate and tube trailing arm, and adjustable NASCAR-style rear sway bar.

The original 3.6-liter flat-six was sent to Rothsport Racing for improvement. Displacement grows to 3.8 liters, new internals include custom throttle bodies and intake manifold, and a Motec ECU. After the fettling, the stock engine with 247 horsepower and 228 pound-feet of torque puts out 365 hp and 310 lb-ft, sent either to the rear wheels or all wheels depending on customer preference.

Threaded through the prototype cabin's full chromoly steel roll cage are embroidered Sparco race seats with six-point harnesses, a locking storage box behind, a Motec digital display, and only the knobs and buttons necessary to go even faster when the road ends, and be comfortable while doing it. The cockpit's been fully sealed against any intrusion by the front fuel supply or the engine bay, while sound deadening and a ceramic coating reduce NVH. As one would expect, Russell says interior finishes will be the client's choice of leather and carpet "from bare bones race car to full luxury."

The wrapping consists of all composite bodywork, and jettisoning the steel panels is part of the 400-pound weight loss that lowers curb weight to 2,800 pounds. At the corners, 15-inch Fifteen52 Integrale wheels are wrapped in Toyo Open Country A/T II tires.

Russell explained his goal "was to develop something that might have come out of the Porsche race factory had they continued their efforts in off-road racing into the 1990s with the 964," but he can build his Baja special as anything from a daily driver to a class-legal race car. At that hardcore end, he claims the result "transforms each vehicle into most capable, versatile, dual sport air-cooled 911 on the planet." With Russell's Singer pedigree, he's probably telling the truth. But we don't care if he's lying or if he fell short on both counts, this flyer looks outstanding and we'll take it now. Anyone else wishing to place an order is welcome to contact Russell Built Fabrication with inquiries.