Engine in the middle, drive wheels in back, and that's just the beginning 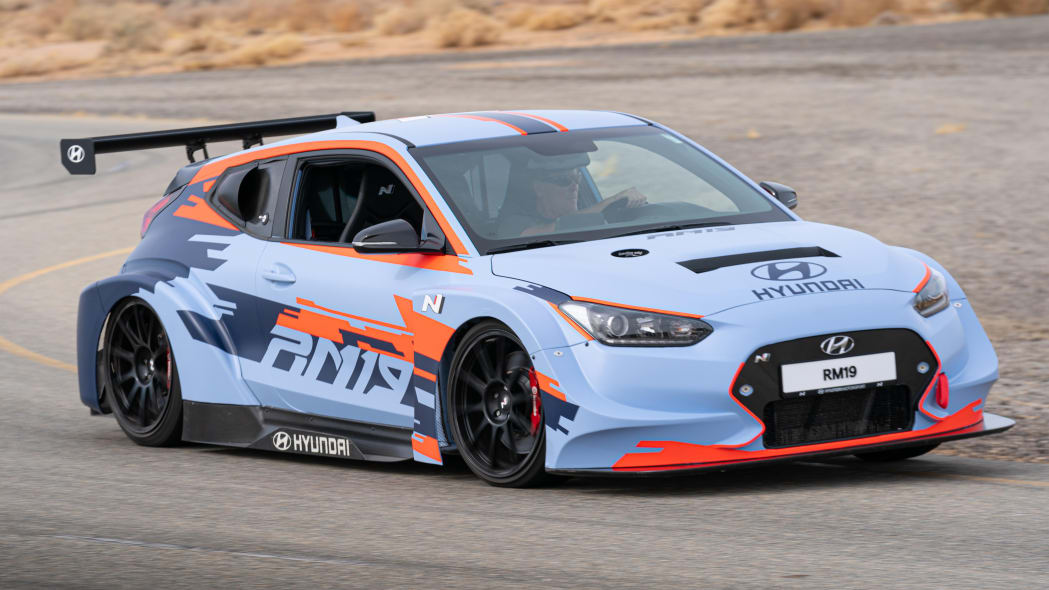 CALIFORNIA CITY, Calif. — The car you see here is not a Veloster. Oh, it looks a lot like one, even with its huge fenders, huger wing and hugest rear splitter. The hatchback profile, general proportions and lighting are the same, and the dashboard sure looks like it was copied-and-pasted. But look closer. Notice something missing, specifically on the passenger side? There's only one door. The uniquely three-door Veloster has a passenger-side rear door for back seat access, but this is the Hyundai RM19, and there is no back seat to access. No, no, there's something far cooler in its place: the engine.

The RM19 is the latest test bed for Hyundai's high-performance N division, and according to Hyundai's all-things-performance guru Albert Biermann, the embodiment of everything N is capable of. And after a brief drive at Hyundai's California Proving Ground, whoa boy are they capable of a lot. While your eyes may say Veloster, every other sense is soaking in an acutely tuned mid-engine sports car with astonishing balance, sensational steering and a 2.0-liter turbo-four that sends 390 horsepower to the rear wheels. It's more Cayman GT4 competitor than Focus RS.

However, it's also a prototype that's a bit more race car than road car. The engine lurking behind your tailbone shrieks like an aggrieved banshee and is literally derived from Hyundai's Touring Car Racing program. It's "derived" not in the usual way that indicates "toned down," but rather, is toned up since it's not subject to racing series Balance of Performance adjustments and gets extra boost as a result. It's connected to a six-speed sequential gearbox, also from racing, which requires the use of a tricky clutch pedal when moving away from a stop, but then behaves like a traditional paddle-shift gearbox thereafter. Shifts are snapped off with absolute immediacy through meaty metal paddles that operate with the sort of mechanical precision that those of every wimpy-pants automatic would be wise to emulate. 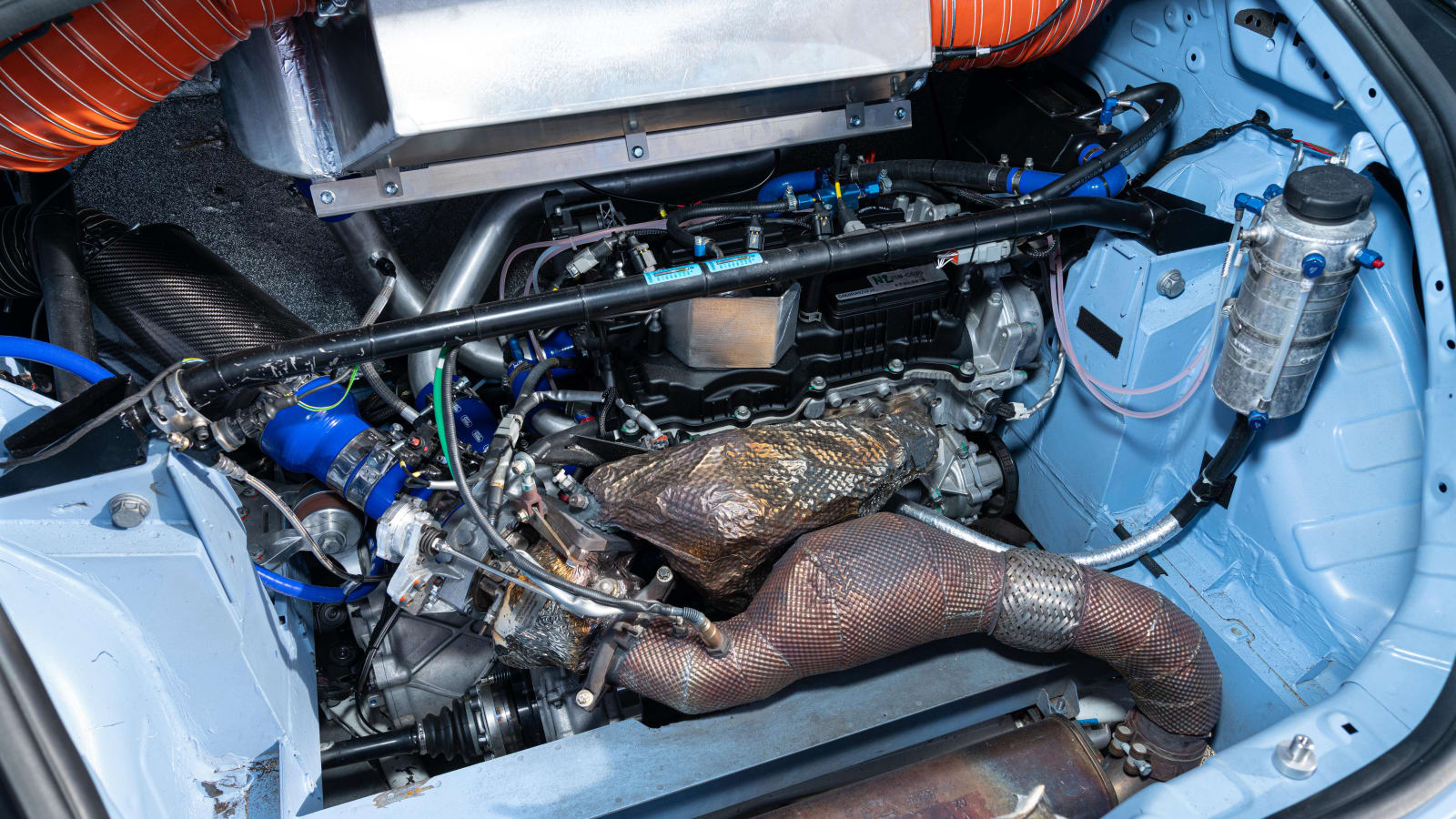 If there's a transmission beef, it's the pedal placement seemingly borrowed from the Veloster. As the clutch pedal is vestigial after takeoff, it would be nice to utilize left-foot braking, but as is usual for manual transmission cars, the clutch gets in the way and the brake is too far to the right. It's ergonomically less than ideal. By contrast, the Veloster TCR race car has its brake and accelerator nearly centered under the steering column with the clutch placed further over to the left.

Thus concludes the complaint section of this review. Now, some words on the componentry. The wheelbase is nearly an inch longer than the Veloster, and there's an extra 3 inches of overall length – though that giant defuser probably makes up much of that. The front subframe is aluminum and steel is used for the rear subframe and the body, which is obviously derived from the Veloster. The giant fenders are made of carbon fiber and Kevlar, while the huge carbon fiber sills have blade-like upticks you delicately must climb over to get inside. The enormous wing has buttresses inside the liftgate visible through the rear window, which not only looks tremendously cool, but prevents the liftgate from crunching like tinfoil under air pressure.

The suspension consists of MacPherson struts up front, a double-wishbone independent rear and conventional gas-pressure dampers. The 20-inch forged wheels from OZ Racing are wrapped in 245/30 rubber front and 305/30 rear. The Brembo brakes are six-piston front and four-piston rear. The steering? It's rack-mounted electric assist, but it sure offers enough precision and feel to make you wonder if there's any assist at all. 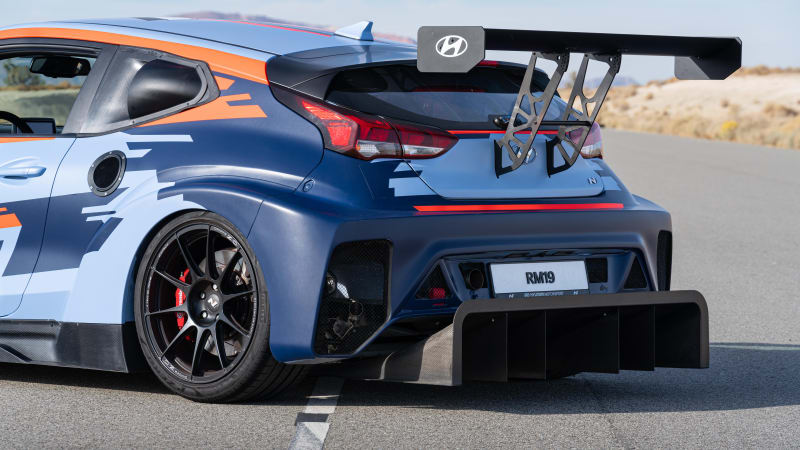 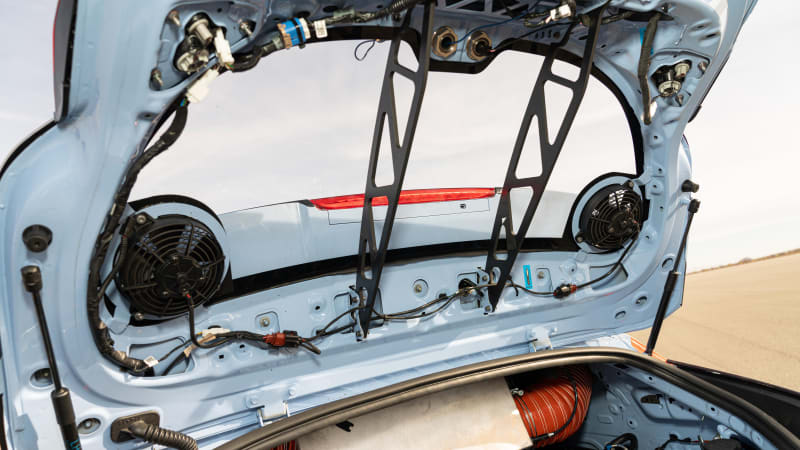 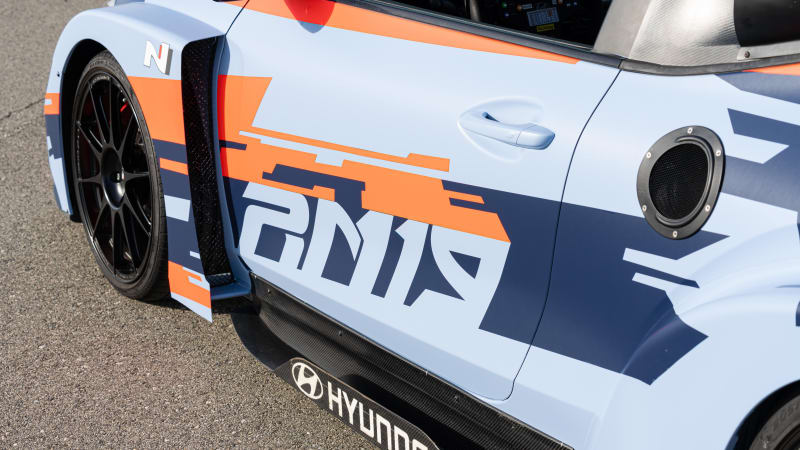 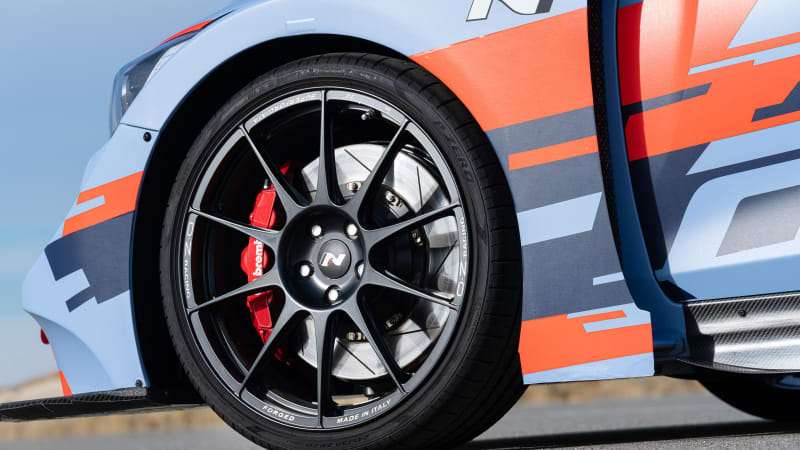 We only made three laps of the California Proving Ground handling track, which was entirely too brief for a full evaluation of the fruits of Biermann and friends' collective labor. However, it's quite clear they're onto something special with this mid-engined formula. It's as balanced as you'd expect, the grip will suck your eyeballs out, and the only clenching moment was brief, easily controlled and likely the result of a flirtation with the dusty outskirts of the track. It's not the spooky beast we were expecting would result from such a Frankenstein project of replacing a hatchback's back seat with an engine and sending the drive wheels into the caboose.

Biermann, who is officially Hyundai's head of global research and development, is quoted in the RM19 press release as saying, "Throughout the evolution of the RM Series [as the number suggests, there have been predecessors], our engineers have gained tremendous hands-on knowledge of high-performance vehicle dynamics with various front-to-rear weight distributions coupled with the effects of a fully-weighted, high-strength body structure on vehicle performance."

Biermann, famously, was previously in charge of BMW's M Division, and his success at adding some dynamic magic to Hyundai and Genesis is well-documented. Yet, RM is one step further. It could easily result in a road-going mid-engine sports car, perhaps powered by electrified powertrains developed in concert or consultation with Hyundai's new partner Rimac Automobili. After this brief drive, we can't wait to see what comes next.