Roadie is one of the more interesting gig companies that has launched in recent years. Interesting because it combines so many different kinds of deliveries into one business.

Working for Roadie, you might do a quick delivery of small home-repair items from Home Depot one day, and you might deliver a brand new washer and dryer to a customer the next. You really never know. The items run the gamut from sports tickets to musical instruments to home moves.

Officially, from their website, “Roadie is an on-the-way delivery service that connects people with stuff to send to drivers already heading that way.”

That’s mostly true, but it should be taken with a grain of salt as well. That’s because while some Roadie gigs can involve the delivery of small stuff, others involve the delivery of really big things — all the way up to a whole-house move. In a large move like that, it’s not going to be something you’re going to pick up and deliver because you’re headed that way, because it will take dedicated equipment, like a large truck. It may even take a team of people to complete the job. On these large jobs, which are a big part of Roadie’s offerings, your vehicle or truck will be fully dedicated to that job.

And that has been the problem for Roadie. They want to offer customers rock-bottom prices but the low rates oftentimes don’t cut it with drivers. It’s one thing to drop by Home Depot, pick up a small package for delivery to a customer who is in the general vicinity of where you were already headed, and earning a quick $10-$12 along the way. But it’s quite another to be asked to move a whole house worth of furniture from one end of the country to the other for $650. If your truck is packed full with a huge load like that, you won’t be able to pick up other loads along the way. Very few drivers are willing to do those kinds of trips for that kind of money.

On the other hand, if you’re headed cross country anyway, and you can take something that easily fits into your vehicle and earn a hundred bucks or so, then why not?

Roadie for the long haul

Long-haul Roadie gigs are one of the last few remaining pure plays in the gig economy. Originally, gigs like those offered by Roadie and Uber and the like were intended to be part-time affairs designed to put a little extra spending money in people’s pockets.

When Uber began, they envisioned people using cars and vehicles they already owned to drive a few hours a week when they had some spare time — all for the sake of some extra pocket change. In the years since, however, about half of all Uber and Lyft drivers do it as a full-time occupation.

It’s true that Roadie could become a full-time gig as well, but their original idea of being something similar to a long-haul trucking firm still exists, even though they’ve added more and more local moves and deliveries as well as now allowing their workers to move pretty much anything from pizzas to furniture.

But it’s the long-haul trips that keep Roadie running along the lines of the original vision gig companies had of utilizing part-time workers. That’s because Roadie’s long hauls don’t pay enough to make it worth doing for a full-time income. They usually don’t even pay enough to cover the expenses of the trip. You may get a $150 offer to deliver a chair 1,500 miles to the other side of the country. If you’re doing that full-time, you’re going to lose big money on every mile. A gig like that only makes sense if you were already going that way and you have extra room in your car or truck.

If you were planning to take that trip anyway, picking up an extra $150 in cash along the way would help defray the expenses of your trip and be a good deal for you. In this way, Roadie keeps to the original intent of the gig economy, which was “sharing.” Roadie can be worth it if you think of it as a shared ride. In other words, a ride or trip you were already going to do but you decide to share some of the space in your vehicle with someone else who is willing to pay for that space.

In this example, $150 for 1,500 miles would shave $0.10 per mile off the cost of your trip, but your true cost per mile would be something closer to $0.50. It wouldn’t be enough to make a profit, it wouldn’t even be enough to cover your expenses and break even, but it would pay for about a quarter of the driving costs of your trip. Who wouldn’t like to get 25% off every once in a while?

So, if you think of Roadie as sharing rather than as a way to make a living, then it kind of works. You’re willing to share space in your car with someone who is willing to share in a small portion of your travel expenses. 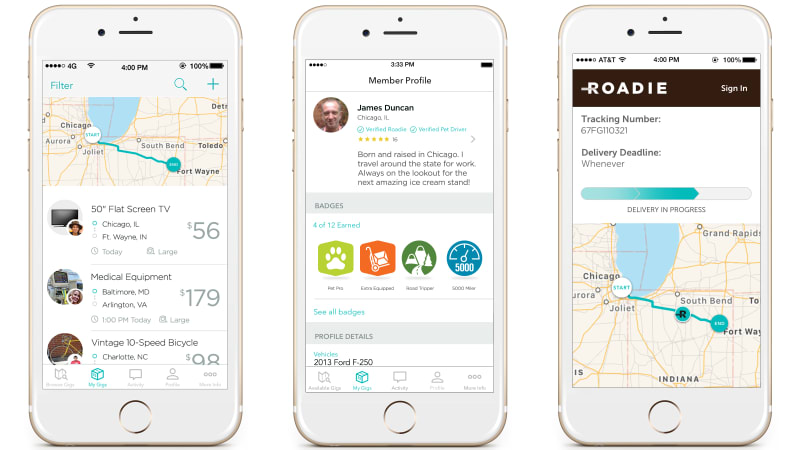 Roadie for the short haul

Long-haul trips were Roadie’s original focus, but over time, they apparently realized no one was going to devote full-time to a job that would be such an obvious money loser. Don’t think for a minute that these gig companies don’t rely heavily upon the full-time workers. Full-timers make up the backbone of their work force. Even though they are a little less than half of their workers, they need them to survive.

Roadie realized that the extremely low pay per mile that their customers were willing to offer for long-haul trips wasn’t going to keep their workforce motivated. So they decided to add local trips. Now they’ll pick up and deliver pretty much anything a customer might request. They’ll pick up drug store prescriptions, groceries, furniture, paint. They’ll pick up pizza and hamburgers. “From cupcakes to couches” as they put it on their website.

There’s no doubt that these smaller local deliveries have saved Roadie. With these jobs, drivers can stay local and do short trips that pay more per mile than the long cross-country trips do.

Roadie has recently done a major re-design of their driver app. One of the biggest improvements is that they are now giving drivers more information about each gig before they show up for the pick-up.

Getting good information about a job request is of utmost importance to gig workers. As independent contractors, gig workers have to have the ability to turn down jobs that don’t meet their requirements. Most gig companies have been very stingy about giving out that information, because they don’t want their workers to turn down work.

By not giving workers enough information about the job to enable them to make an informed decision about whether or not to accept it, however, they undercut their claims that workers are independent contractors rather than employees. As such, Roadie has been smart here in their decision to give their workers more information rather than less.

They will tell drivers where the pickup is, how far away it is and the approximate time the whole job is expected to take. It will also give them the dimensions and weight of the items they’re going to pick up, which is especially important for Roadie drivers.

Roadie has one interesting angle on gig work that most of the other gig companies have shunned. They let the workers set their own prices. When a job comes in, the workers can see the details and decide how much money they’d be willing to do it for.

They then put in an offer and the customer can accept or decline it. The downside to this method — at least from a driver’s standpoint — is that Roadie will send each job out to multiple workers, and they all put in a bid, so you can easily get under-bid. On the other hand, the customer may look at other factors besides just price, such as the worker’s rating. Highly-rated workers may be able to get away with charging a little more than the others.

All in all, we think Roadie is a pretty interesting gig and worth checking out if delivering heavier and larger items is your thing. Most gigs that allow workers to set their own prices usually pay a little better than the other ones.