Introduced at the 2019 Los Angeles Auto Show, the 2021 Mercedes-AMG GLS 63 ticks two boxes rarely found on the same specifications sheet. It seats seven, and it offers over 600 horsepower.

AMG dropped its ubiquitous 4.0-liter V8 in the engine bay. The engine is twin-turbocharged to develop 603 horsepower between 5,750 and 6,500 rpm and 627 pound-feet of torque from 2,500 to 4,500 rpm, but a 48-volt starter-generator briefly injects an additional 21 horsepower and 184 pound-feet of torque into the driveline. All told, the behemoth accelerates from zero to 60 mph in an estimated 4.1 seconds, and cruises at up to 174 mph on the German autobahn. 4Matic all-wheel drive and a nine-speed, paddle-shifted automatic transmission channel the eight-cylinder's output to the pavement.

There are plenty of 600-plus-horsepower cars on the market, it's a number that has become a new benchmark in recent years, but the GLS 63 is the only one that comfortably seats seven adults. The front passengers sit on AMG seats that offer more lateral support than the ones found in the standard GLS, and the driver faces a model-specific instrument cluster with redesigned graphics and a lap timer. Heated first- and second-row seats come standard, as does a 12.3-inch touchscreen for the MBUX infotainment system. Customers can order a heated third-row seat at an extra cost.

The GLS 63 wears an immense version of AMG's signature Panamericana grille positioned above a redesigned lower bumper. Wheel arch extensions, side skirts, a rear air diffuser, and quad exhaust tips round out the look. It's relatively low key, even when riding on the optional 23-inch alloy wheels.

Pricing information hasn't been released yet, but don't expect the 2021 GLS 63 to come cheap. Keep in mind Mercedes-Benz charged $126,150 for the outgoing GLS 63, which bucked the downsizing trend with a mighty 5.5-liter V8. American deliveries will begin halfway through 2020. 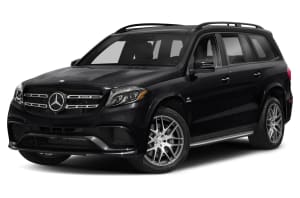