Some are turning to the brands' compact SUVs, but most are going elsewhere

U.S. automakers have made a bold bet in ditching sedans and doubling down on trucks and SUVs, while hoping that their small car buyers come along for the (higher-riding) ride. A new report from Edmunds suggests, perhaps unsurprisingly, that not all customers are willing to make the trade up and that as a result, both Ford and Chevrolet are conceding market share to competitors.

Titled “Shuttered Car Lines,” the report looks at two discontinued small cars: the Ford Focus and Chevrolet Cruze, of which it says there are nearly 2.7 million and 1.6 million still on the road, respectively. Without direct replacements, the report finds, the number of owners of those cars staying with the brands has fallen to record low levels in 2019 — 33% for Ford and 45% for Chevy, down from 40% and 57% in 2016. Both brands will likely see further erosions, the researchers say, since Ford is sunsetting the Fiesta and Fusion, its lone remaining non-Mustang passenger cars, while Chevy ended production of the Cruze at its Lordstown, Ohio, plant in March.

Through September, 31% of Focus owners bought from a competitor when they traded in their car, compared with 23% of Cruze owners, the report says. Among Focus owners, 42.2% traded in for another car this year, whether from Ford or a competitor, versus 48.8% who traded for an SUV and 9.3% who bought a truck. For Cruze owners, 42.3% stayed with a car, 49.1% took an SUV and 8.6% went to a truck.

Ford did not respond to a request for comment.

Chevy spokesman Jim Cain provided retail registration data from automotive market intelligence firm R.L. Polk & Co. that show the brand has mostly held its share of the retail market through September, with a drop of 2.8% in year-to-date registrations, resulting in market share of 10.6%, a drop of a tenth of a percentage point. “In other words, Chevrolet’s trucks, SUVs and crossovers are offsetting lower sales of discontinued vehicles like the Cruze,” he said. 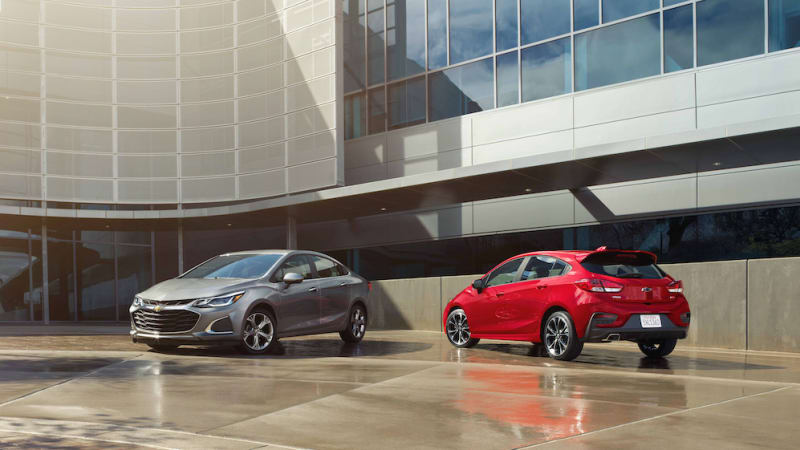 Chevrolet still offers the Spark and Sonic subcompacts, plus the midsize Malibu. The Impala also remains in production until January, Cain noted.

Edmunds tells Autoblog it derived its report using retail sales transactions and say it’s “unrealistic” to assume you can exit an entire segment and not see a corresponding drop in market share. “Compact cars account for more than 9% of the new vehicle market, and it’s not likely to drop to 0%, especially given the fact that the average price of a new car is in record territory,” Edmunds spokeswoman Nicole Carriere said.

Ford and GM — along with Fiat Chrysler, which has long since culled small sedans from its U.S. brands — have followed consumer preferences away from cars and toward larger and higher-riding crossovers, SUVs and trucks. Analysts say the moves are also rooted in finances: Since small cars carry narrow or non-existent profit margins, automakers are focusing on more profitable trucks and utility vehicles to help them stockpile cash to invest in future technologies, chiefly electrification and autonomous vehicles.

But Edmunds notes that at 9.1% of the U.S. car market in 2019, compact cars like the Focus and Cruze represent the largest chunk of passenger cars (midsize sedans, by contrast, have plummeted to 8%, Edmunds says, from a high of 17% in 2012). They’re also the top segment in terms of customer loyalty, with 33% of trade-ins resulting in another compact car. By contrast, SUVs now own nearly half of the U.S. auto market, at 47.9%.

Edmunds says the Escape compact crossover has emerged as the top pick of new vehicle for former Focus owners, at 9.5%, followed by the EcoSport at 6.2%. The majority of buyers are still opting for something from another brand, however.

Chevy buyers have still mostly been trading in for newer Cruzes, at 10.3%. But the second most popular option, the Equinox, is similarly a nearly $5,000 more expensive option. The Honda Civic and Toyota Corolla have both gained from people trading in a Focus or Cruze who want to stay in a small car, Edmunds said.

The data compiled by Edmunds, along with the handy graphs presented in its report is definitely worth a further read as we've just provided the highlights.