PONTIAC, Mich. — Chevrolet lovingly refers to the LT2 in the 2020 Chevy Corvette as the “jewel” of the car. We don’t disagree. It’s a pretty engine, far prettier than any other base Small Blocks we’ve seen in Corvettes past. You can gaze upon the engine from the exterior of the car, too, so long as you haven’t bought the Convertible.

Chevy brought us to the GM Performance and Manufacturing Center in Pontiac, Michigan, to give us all the nitty gritty details about its “jewel,” and now we can share them with you. There’s a whole lot to discuss, so let’s get right into what Chevy did to make this engine worthy of living in the heart of the first mid-engine Corvette.

Despite similarities between the LT2 and the LT1, Chevy stresses heavily that “it isn’t the LT1.2. It’s the LT2.” Changing the name of something doesn’t always mean anything, but in this case, the new engine designation makes sense the more you look into it.

Everything started with the architecture of the car. Now that Chevy doesn’t have to worry about forward visibility over a big V8, it can take some liberties on how much space it’s using in the car. Of course, Chevy didn’t change the 6.2-liter displacement, but other things have changed. The intake manifold grew in height and volume, from 11.1 liters to 14.1 liters. All the intake runners are the same length as well, something that wasn’t geometrically possible with the LT1. This means more power at higher RPMs and general flow improvements — Chevy says it’s a 3 percent increase in performance over the old intake manifold. 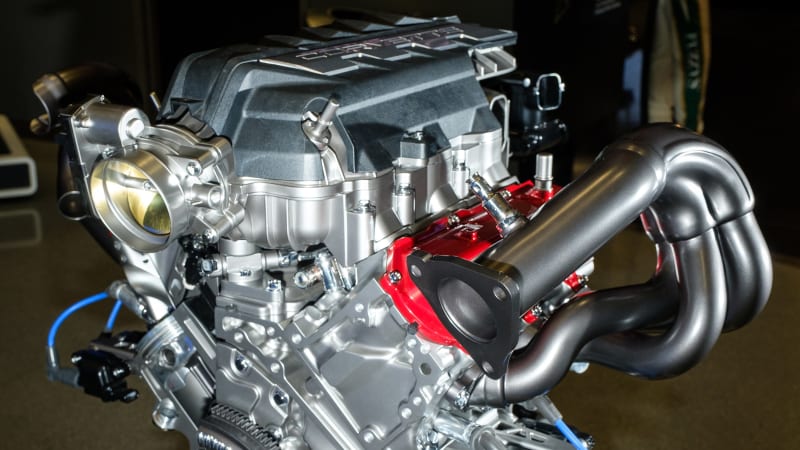 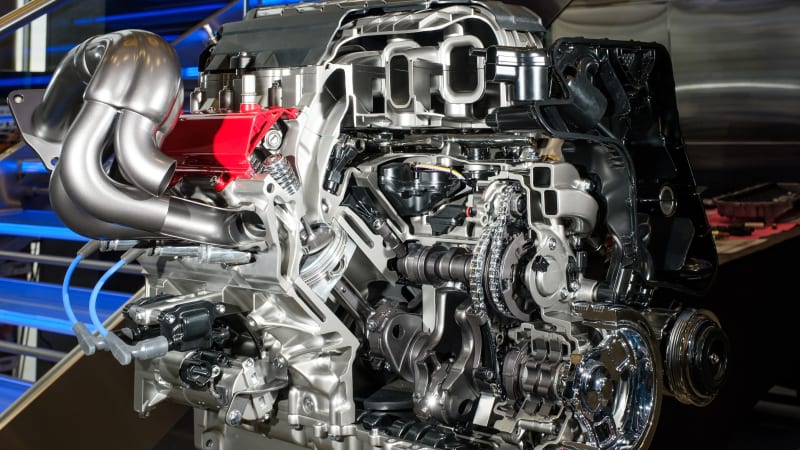 The camshaft profile changed, as well. Exhaust valve lift is increased by 1 mm to 14 mm, making it exactly the same as the intake lift now. Additionally, Chevy says it increased both the intake and exhaust valve lift duration. These changes allow the added flow to be taken advantage of. This hasn’t resulted in a big, lopey cam sound on idle, though. Instead, Chevy says its new wide-range air-fuel sensor (WRAF) allows for improved idle stability to be smoother than even the LT1 was capable of. Apparently, you can have your cake and eat it, too.

Evacuating the exhaust gases is still massively important, and Chevy says it realized big gains in the LT2’s exhaust system. This system was a complete, ground-up redesign, for obvious reasons. New, fabricated four-into-one exhaust manifolds (that look like aftermarket headers) sweep upwards and into the pipes. The primary runners are “nearly identical in length,” measuring about 330 mm. Chevy claims a 1 percent increase in power over the LT1 header design.

New catalytic converters are further downstream. Chevy says it only uses one split-volume catalyst per bank now instead of the two-converter setup necessary with the LT1. The new WRAF allows for earlier light off of the catalyst, which ends up reducing tailpipe emissions by a whopping 25 percent. The single converter per bank setup also helps packaging and improves exhaust flow.

Chevy says it spent a great deal of effort and time perfecting the exhaust note you hear from the rear of the C8. It even went so far as to tell us they were willing to compromise on power if it meant a better noise coming from those quad exhaust tips. Trust us, the noise is magnificent in the way a Corvette should sound. 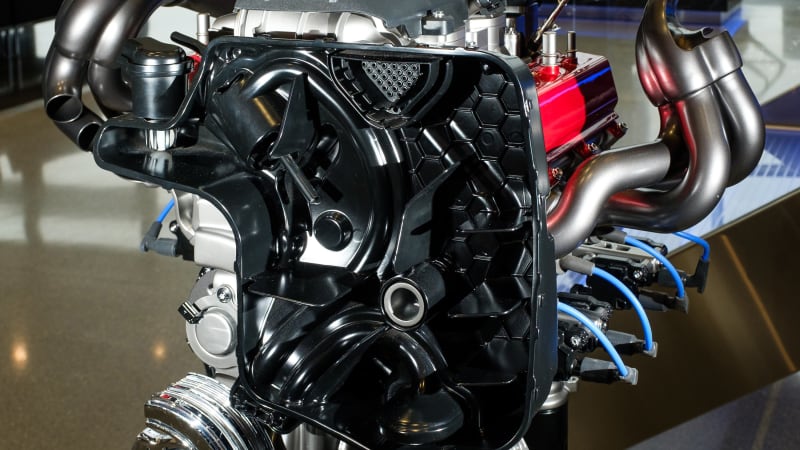 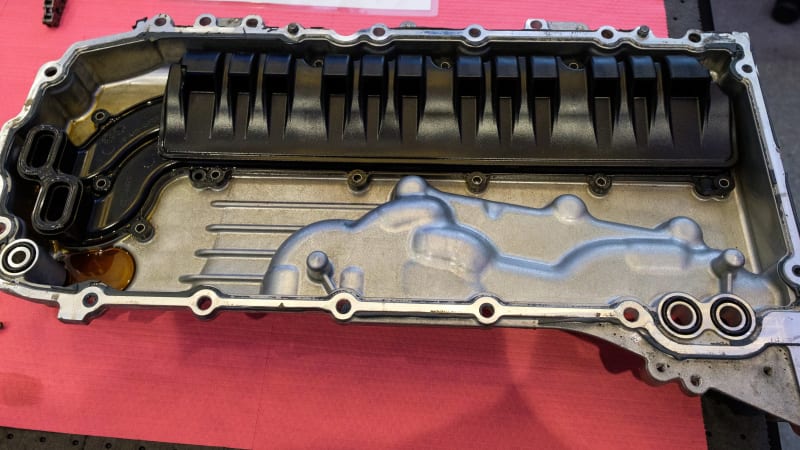 The LT1 had an available dry sump oil system, but the LT2’s is far superior. Chevy offered proof of this by saying it only managed to grenade one engine in the development process due to oil pressure loss, versus multiple LT1s facing their death in similar testing. What that means for owners is a more reliable lubrication system for track use.

Chevy says its testing indicated the dry sump system is capable of maintaining oil pressure at sustained lateral acceleration on track up to 1.25 g. You’ll be hard pressed to hit 1.25 g in a corner on any racetrack in a street car, and the only way you’d come close to that in the C8 is with stickier rubber than what Chevy fits at the factory. Far less oil than before is being thrown around and churned up with the revised system, and that’s ideal for track use. It also doesn’t need as much oil as the LT1’s dry sump system did. At 7.5 quarts of oil, it requires 2.25 quarts less, making the total system weight 3.3 pounds lighter.

Despite the C8’s LT2 being taller than the LT1, it sits lower in the car than before. Chevy managed to mount it 25 mm lower than the C7, improving the car’s center of gravity. And even though that Small Block is tucked a little further in there than before, you can still see gorgeous, painted rocker covers and attention to detail throughout the engine bay. The red rocker covers are especially noteworthy — the color is called Edge Red externally, but Chevy refers to them as “Venthan Red.” An engineer with the last name of Venthan designed them, but apparently the marketing team didn’t go for “Venthan Red” as the official name. 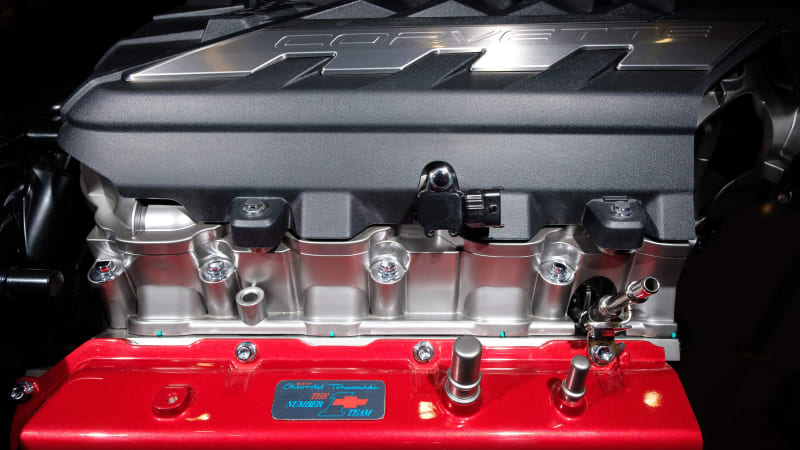 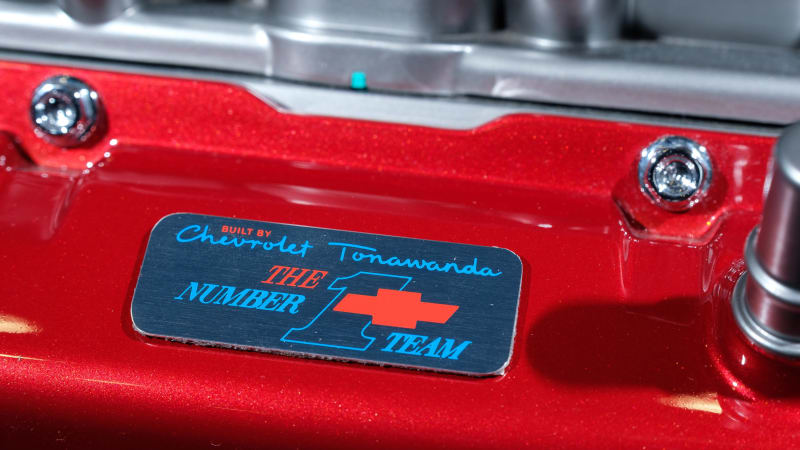 One last appearance item we’ll note is the addition of the Tonawanda pride badge. The original Small Block was built in Tonawanda, N.Y. (near Buffalo), and the LT2 is built there, too. Mark Reuss made a last-second decision to incorporate the retro badge onto the LT2 — it was originally used on Corvettes in the 1960s. We’re sure the good folks up in Tonawanda will love it.

So there you have it. The LT2 is capable of 495 horsepower and 470 pound-feet of torque with the Z51 package, and it’ll hit 60 mph from rest in 2.9 seconds. It’s tough to believe the base Corvette got that much faster overnight, but it did, and we can’t wait to start seeing it on the road once production starts in February 2020.