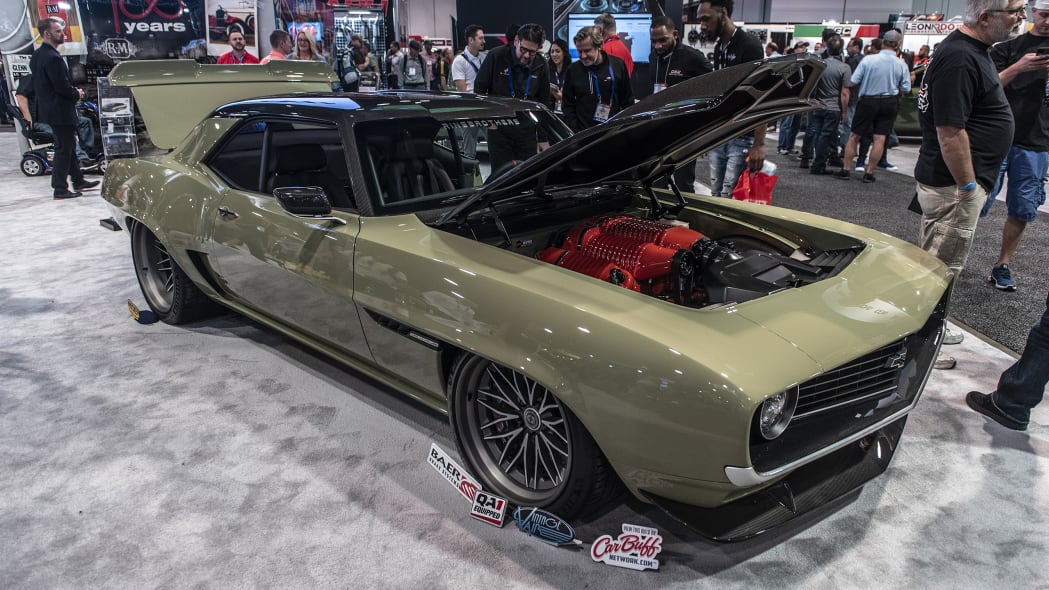 A Belgian shopper commissioned Ringbrothers to build the Valkyrja, perhaps after seeing the restomodder's work on other Camaros like the 510-hp Razor from 2008 or the 1,000-hp G-Code in 2016. Wegner Motorsports serves up the meat on the dish, in the form of a 416-cubic-inch LS3 V8 assisted by a 2.9-liter Whipple supercharger. Considering the four-figure builds Wegner's known for, the Valkyrja hews to the mild side with 'just' 890 horsepower. But hey, who needs gaudy numbers when you're named after the daunting women on winged stallions tasked with nominating Viking dead and shepherding them to Valhalla? 'Speaking softly' with a mere 890 horses is probably the right way to go.

The owner, who named the car and will take delivery after SEMA, opted for European discretion, hence precious little official info on the build and no images of the interior.

A brace of carbon fiber, 3D-printed, and CNC-machined parts decorate the exterior, starting with the custom triple-vented carbon fiber hood. The front fascia's an interplay of metal and carbon fiber, fronted by a custom metal bumper facing. The top side is all about carbon fiber, too, the channeled roof laid up in CF from the A-pillar to the C-pillar and down to the decklid. Two fuel filler caps at the trunk's leading edge are marked "Pump" and "Race." The rear valance has been redone in carbon fiber with stepped metal mesh over the taillights, a center-exit twin exhaust just above a plaque reading "Carbonated," another custom metal bumper, and a subtle diffuser down low. And check out those side mirrors.

The whole package has been dressed in BASF Glasurit 90 Line paint called TOTOPKG Green, and will be on display at the BASF booth for the rest of the show.