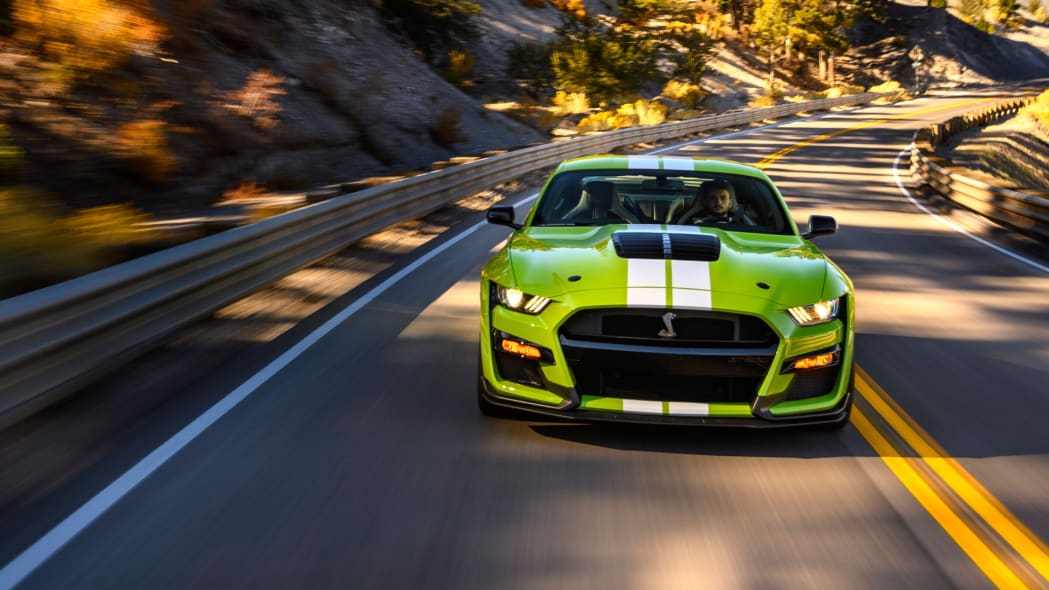 We left two manufacturer claims out of our First Drive of the 2020 Ford Mustang Shelby GT500. Ford officially claims the world's newest pony car can connect 0-60 miles an hour in 3.3 seconds in ideal conditions, whatever those might be. That's better than the 3.5-second estimated time we listed in the First Drive, and about as intentional a target as you're going to get. The 650-horsepower Chevrolet Camaro ZL1 is officially listed with a 3.5-second 0-60 time, and Car and Driver said it pulled off the sprint in the ZL1 in 3.4 seconds. The GT500's acceleration is how the coupe gets from 0-100-0 in 10.6 seconds, beating the original Bugatti Veyron's time at the same metric.

Jason Camissa bemoned "this Mustang is far less successful" on the drag strip because of the launch control system's delay between releasing the brake and actual takeoff, but the package apparently flies once it gets moving. Ford lists the quarter-mile as taking 10.7 seconds, again, under ideal conditions. YouTuber Revan Evan, also at the media launch at Las Vegas Motor Speedway, managed to reel off four runs under 11 seconds. Given a loaner GT500 he could spend time with at his home track in Bradenton, Florida, Evan reeled off another day of runs under 11 seconds, including a best drag of 10.614 seconds at 133.21 mph. He told a commenter that race weight was 4,250 pounds with himself in the seat, the run done with factory tires and Florida's 93 octane gas. Nothing else in the pony class, as stock, can touch that right now.

Two other interesting details on the GT500. On the subject of the two tire choices, either the Michelin Pilot Sport 4S or Pilot Sport Cup 2, Car and Driver wrote, "engineers tells us that the longitudinal grip — the traction for braking and accelerating — is very similar between the two tires. The Cup 2 tires offer a significant advantage in cornering grip." And Road & Track, astounded by instantaneous shifts when using the paddles, found out that software engineers "overclocked" the paddles. "The switch that sends the shift command to the transmission," the mag wrote, "is activated at the beginning of the paddle's stroke, so by the time you've pulled it to its stop, the transmission is already answering the request."