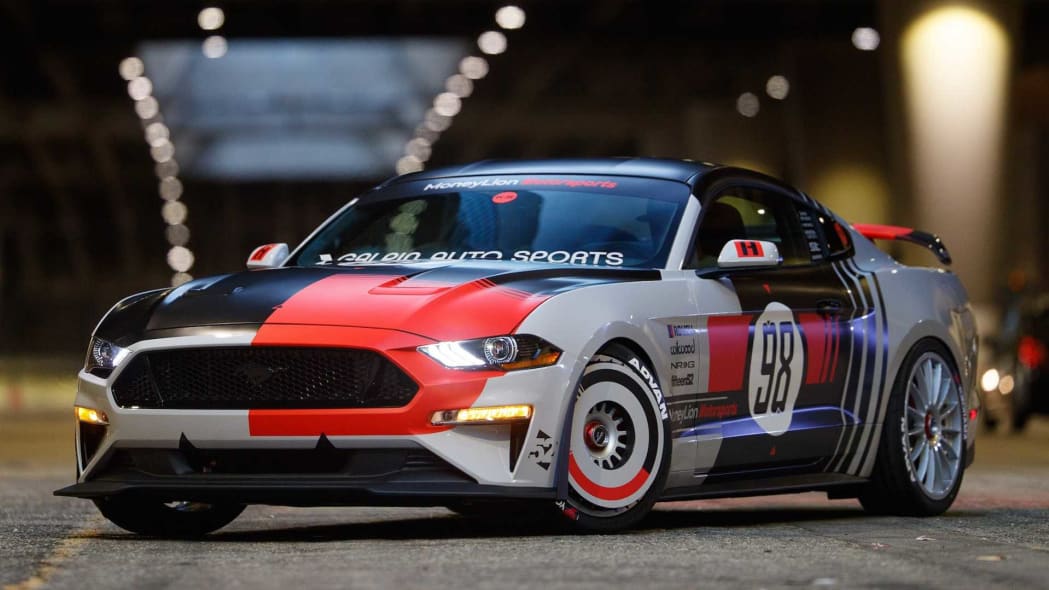 With SEMA less than a month away, we're getting advance displays of the treats to be on show. Online bank MoneyLion will have three Ford Mustang GTs in Las Vegas, each one tuned by the duo of a NASCAR driver paired with an auto world luminary. NASCAR Cup Champion Joey Logano teamed with Vaughn Gittin Jr. on a 700-horsepower Mustang to start the trio, then NASCAR Xfinity Series competitor Austin Cindric hooked up with the brothers at Tucci Hot Rods on a 725-hp build. MoneyLion sponsors the Team Penske Mustang Cindric drives, as well as the MoneyLion 300 Xfinity race. This third Mustang comes courtesy of Logano's Team Penske teammate Ryan Blaney, who worked with photographer Larry Chen, renderer extraordinaire Khyzyl Saleem, and Galpin Motorsports. It channels the white, black, and red livery on the #98 Ford GT40 that won the 1966 24 Hours of Daytona with Ken Miles and Lloyd Ruby driving for Shelby American.

Enhancing the livery are a Roush Performance front lip, Anderson Composites decklid and spoiler, and Roush three-quarter window covers. The only thing better than a racy livery is a racy drivetrain, the bona fides beginning with a Roush supercharger to take the 5.0-liter Coyote V8 to 700 hp and 610 pound-feet of torque. ST Suspension XTA coilovers keep 20-inch Fifteen52 Podium wheels and Yokohama Advan tires stuck to the road, those wheels flaunting a turbofan setup at the front axle. Wilwood performance brakes do the stopping, a MagnaFlow Competition Series cat-back performance exhaust makes the music.

The interior's reworked for hard use, featuring a NASCAR-style steering wheel bereft of buttons, and NRG race buckets threaded by six-point harnesses. With an eye on the old-school enthusiast, a six-speed manual shifter sits between the seats.

Blaney and Chen will debut the retro pony car this Sunday October 13 at the 1000Bulbs.Com 500 race at Talladega Superspeedway. After that, all three custom jobs will sit under the lights at SEMA. The three 'Stangs are part of the MoneyLion Here We Roar Sweepstakes, and will be given away after the show. From now until Oct. 20, anyone can enter the competition at the sweepstakes site. The three winners of the three Mustangs not only get a car each, they and a guest will be flown to Ford Championship Weekend at Homestead-Miami Speedway, Nov. 15-17.