We wouldn't be surprised if some parts become available to customers 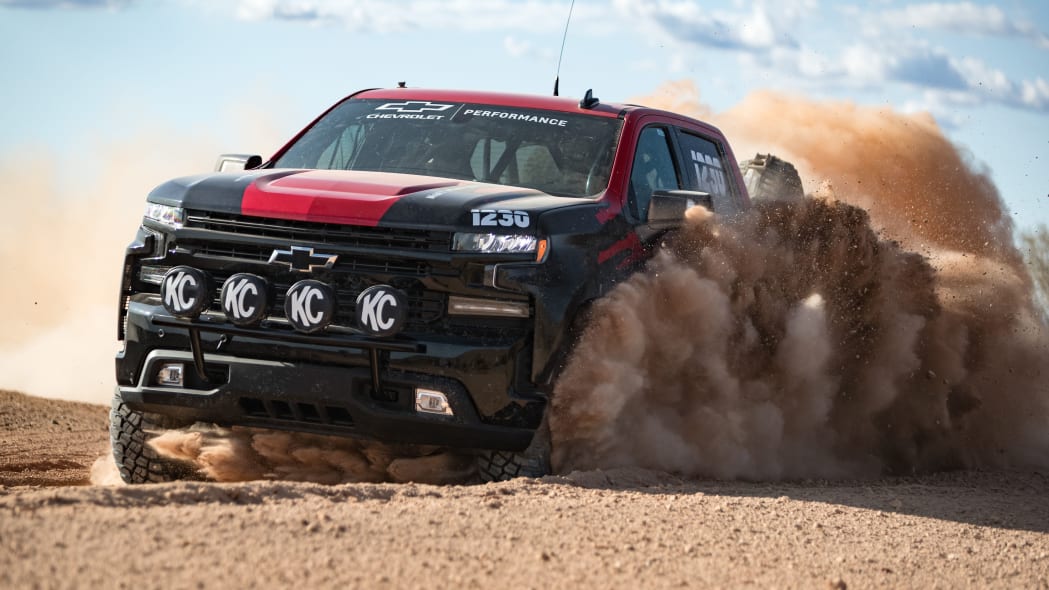 The Chevy Colorado ZR2 has been the bow-tie brand's truck of choice for off-road performance with its heavily modified and Multimatic spool valve shock-equipped suspension, racing program and factory-backed aftermarket upgrades. As cool as it is, we imagine there are Chevy fans who wish the company would give the full-size Silverado some love. Well that time is coming, as the 2020 Chevy Silverado is going offroad racing, and it's got a lot of sweet upgrades we think could reach production.

The new race truck will compete in the 1200 Stock class of the Best in the Desert series. It was developed in collaboration with Hall Racing, which helped put together the Colorado ZR2 race trucks and will continue racing them. The Silverado is based on the LT Trail Boss with the optional 420-horsepower 6.2-liter V8 and 10-speed automatic transmission. The only modifications are to the chassis and suspension, but they're still significant. It features a long-travel suspension with bigger, beefier versions of the ZR2's spool valve shocks as well as jounce shocks to help absorb and protect the truck from especially nasty bumps. Skid plates cover all the important mechanical parts, and 35-inch off-road tires replace the Trail Boss's roughly 32-inch stock tires.

Chevy didn't announce any kind of release date for these parts, either as individual aftermarket accessories or as a special Silverado trim. But we'd say there's a good chance some of them will become available to consumers. After running the upgraded ZR2 race truck, Chevy offered a bunch of those parts as accessories to ZR2 owners, so it seems logical to do the same with the Silverado.

Chevy's chief engineer for government programs, performance variants, parts and motorsports also had words that suggest potential consumer applications from the race truck: "Offroad racing is just brutal on vehicles. and a single race puts more wear and tear on trucks than most vehicles will experience in years. That makes offroad racing a valuable test bed to evaluate new components. What we learn while racing informs everything from future performance parts and accessories to GM Defense projects and production vehicle changes."

Nothing is guaranteed of course, but we think the odds are good that Chevy will do something to let customers have better offroad Silverados. In the meantime, we can also enjoy the cool new race truck. It will participate in six of the Best in the Desert series races this year.