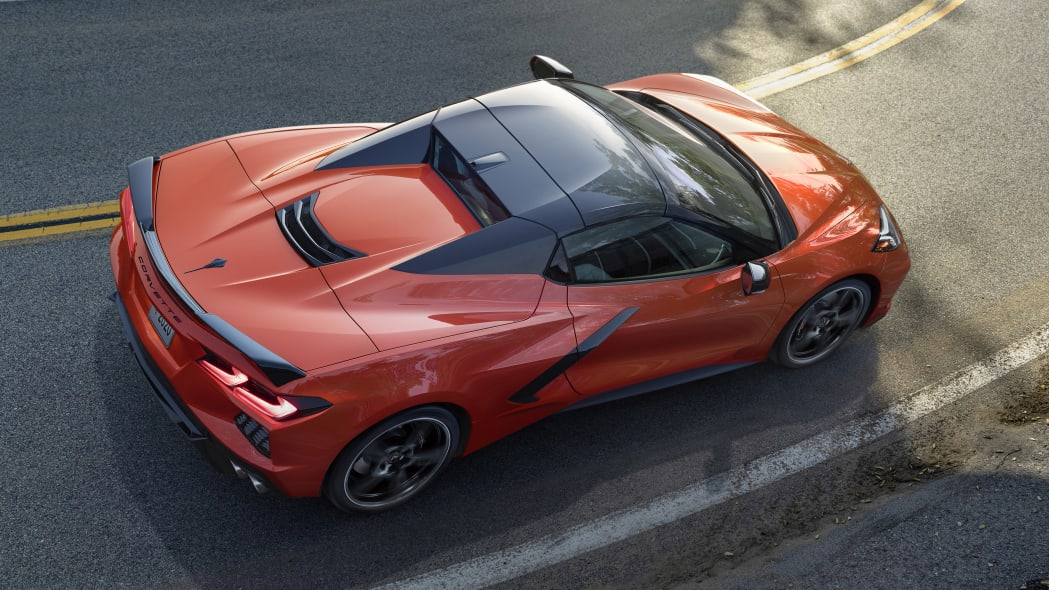 KENNEDY SPACE CENTER, Fla. — Though we got a pretty good look at the 2020 Chevy Corvette convertible earlier this year when it was teased with the coupe, today the company officially showed off the droptop. And that droptop is a retractable hardtop, a first for the model in its nearly seven-decade history. It also only features electric motors to stow it beneath the rear tonneau and engine cover, whereas past Corvettes used hydraulic components. And with the top lowered, no cargo space is lost, and Chevy emphasizes the fact that you can still carry two sets of golf clubs in the car, top up or down.

The rear cover is similar to many mid-engine roadsters with two large flying buttresses behind the seats. By default, all Corvette convertibles feature a body-color top and flying buttresses, but they can be painted in Carbon Flash, a dark metallic gray, at an extra charge. Between them is a piece of glass that can remain in place as a wind deflector, or be lowered for maximum airflow. It can be operated independently of the top, so it can be lowered with the top in place for greater airflow while keeping the sun at bay. The one unfortunate part of the rear cover is that it lacks any sort of window to view the mid-mounted engine.

But rest assured, the LT2 small-block engine is still sitting in the middle. Just like with the coupe, it makes 495 horsepower and 470 pound-feet of torque with the performance exhaust. It's coupled to the same eight-speed dual-clutch transmission, and power goes to the rear wheels. Chevy didn't reveal performance figures or curb weight for the Corvette convertible, but we expect it to be a little heavier, and thus a little slower, since the company did say the suspension has been retuned compared with the coupe to maintain the same driving feel. Top speed should be the same or close, as Chevy says that the convertible with the roof up and the Z51 spoiler equipped has no more drag than the same type of coupe.