And it also houses lots of Tesla-branded batteries 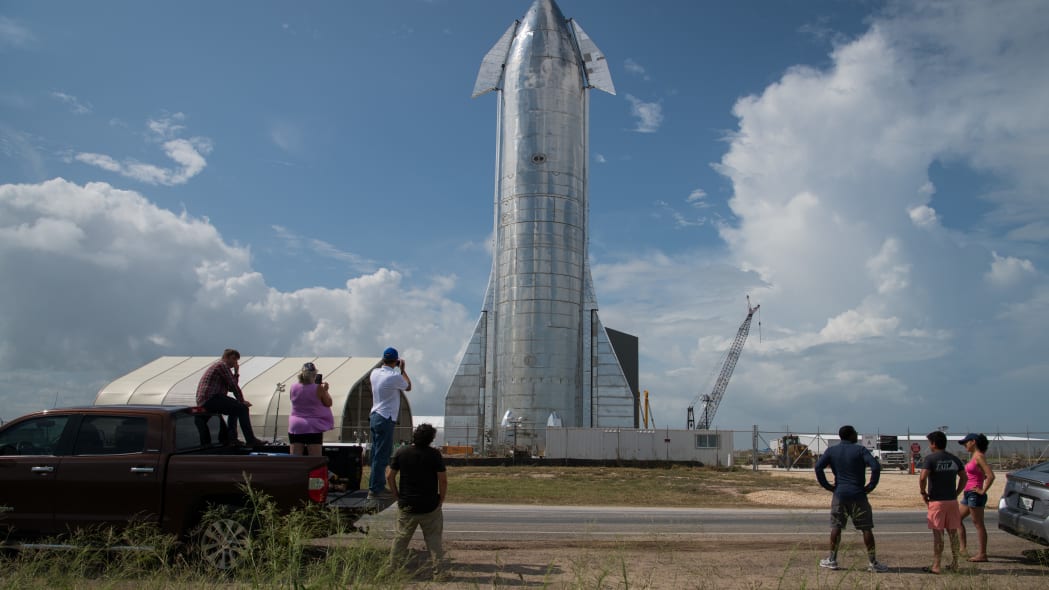 Billionaire entrepreneur Elon Musk has unveiled the latest iteration of his space company's newly assembled Starship, outlining a speedy development timeline for the centerpiece vehicle of SpaceX’s quest to launch humans to the moon and Mars.

Musk showed a crowd of space enthusiasts and reporters at SpaceX’s rocket development site late on Saturday in the remote village of Boca Chica, Texas, animations of Starship landing on the moon and Mars and predicted that the rocket's first orbital flight could come in the next six months, followed by missions to space with humans aboard the next year.

There's some interesting cooperation between SpaceX and Musk's other major endeavor, Tesla. According to reports, the Starship houses a big supply of Tesla-branded batteries, which Musk tweeted is required to move the ship's massive fins.

Many powerful electric motors & batteries. Force required is enormous, as entire fin moves. More about this on the 28th.

"This is basically the holy grail of space," Musk said, standing between a towering, newly assembled Starship rocket and Falcon 1 — the company's first vehicle whose debut orbital mission was celebrated by SpaceX 11 years ago.

"The critical breakthrough that’s needed for us to become a space-faring civilization is to make space travel like air travel," said Musk, who is also the chief executive of electric carmaker Tesla.

Starship, a shiny steel rocketship designed to ferry dozens of humans to the moon and Mars, is the top half of Musk’s colossal interplanetary rocket system that stands 387 feet tall (118 meters) as the latest addition to SpaceX’s lineup of reusable launch vehicles. Musk named Japanese billionaire Yusaku Maezawa as Starship’s first private passenger in 2018.

The Boca Chica village, a few miles north of the Mexican border, is ground zero for SpaceX’s three-year experimental test program for Starship, whose rocket engine tests have rattled the nerves of residents living in a remote hamlet of roughly two dozen homes a mile away.

"I think the actual danger to the Boca Chica village is low but it's not tiny,” Musk said during a question and answer session. “So probably over time it’d be better to buy out the villages, and we’ve made an offer to that effect.”

Some residents have rejected SpaceX’s non-negotiable offer to buyout their homes for three times the market value.

A three-legged prototype of the rocket named Starhopper has test launched in the village twice since July, most recently flying as high as 500 feet (152 meters) and landing on an adjacent slab of concrete to trial Musk’s next generation rocket engine dubbed Raptor.

Musk’s mission to the moon aligns with NASA’s goal of sending humans there by 2024 under its Artemis program, an accelerated deep-space initiative spurred by the Trump administration in March that aims to work with a handful of U.S. space companies in building a long-term presence on the lunar surface before eventually colonizing Mars.

The space agency has tapped SpaceX to figure out how to land vehicles on the lunar surface and help develop a system for refueling rockets — like Starship — in space, an “important technology to aid sustained exploration efforts on the Moon and Mars,” NASA said in a release on Friday.

NASA has awarded SpaceX and Boeing a total of $6.8 billion to build competing rocket and capsule systems to launch astronauts into orbit from American soil for the first time since 2011. Development of both astronaut capsules have been beset by delays and testing mishaps.

“I am looking forward to the SpaceX announcement tomorrow. In the meantime, Commercial Crew is years behind schedule,” NASA administrator Jim Bridenstine said in a Friday night statement. “NASA expects to see the same level of enthusiasm focused on the investments of the American taxpayer. It’s time to deliver.”