Everything you need to know about pricing, specs, features and what's new 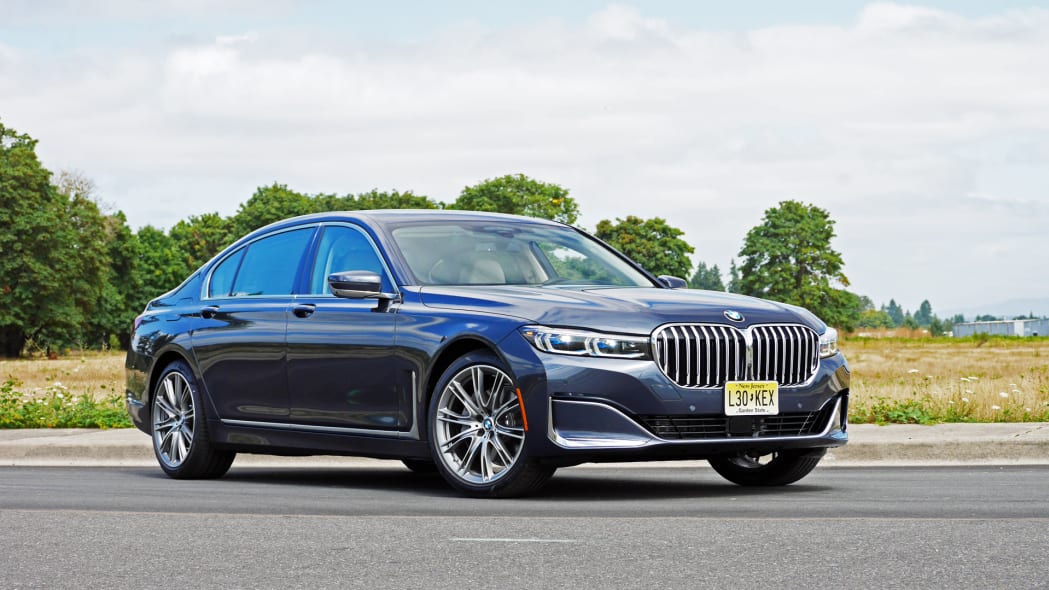 There may be a bigger BMW now and one with a higher model number, but the 2020 BMW 7 Series still reigns supreme over its brand mates as the long-running flagship sedan. Nearly every technological, engineering and performance trick up BMW's sleeve can be found in this car, making it one of the most sophisticated and advanced vehicles on the road today.

Of course, the same could be said for the 7's various flagship sedan competitors, as well as an increasing number of flagship SUVs. Each is superb in its own way, which really makes things like styling, infotainment functionality and driving experience all the more important. Really, it's about what you prefer in a high-dollar sedan.

Yet, if you're looking for something specific – especially on the performance front –  the mack daddy BMW stands out with an unmatched selection of model/powertrain options, including turbocharged six-, eight- and 12-cylinder engines, plus the specialty Alpina B7 and revised 745e plug-in hybrid model. There's nothing quite like them. No matter which way you go, however, it's hard to imagine going wrong. You want grille? The 7 Series gives you grille for 2020, adopting an enormous pair of BMW kidneys as if saying to its new X7 SUV sibling, "I'm still top dog around here." Indeed, the grille is 40 percent bigger than before. There are other visual changes, too. The headlights have been redesigned with a slimmer profile, and BMW's Laserlights are now available as an option above the standard LEDs. The hood has been redesigned with slightly more aggressive lines, the front bumper now has "air deflectors" on the air intakes to cool the brakes, and the side "Air Breathers" have bigger air outlets. Around back, the tailpipes are wider, the taillights are slimmer, and there's now a light bar that stretches across the tail.

Importantly, there are also changes to the powertrain lineup. The 750i gets an overhauled V8 good for an extra 80 horsepower and 74 pound-feet of torque. The plug-in hybrid model is rechristened the 745e xDrive and features an inline-six engine in place of the old inline-four. There's also a more power-dense lithium-ion battery. In total, the system produces 67 more horsepower and 73 more pound-feet than the old 740e.

Inside, there are more acoustic materials, and the all-digital instrument panel is new. 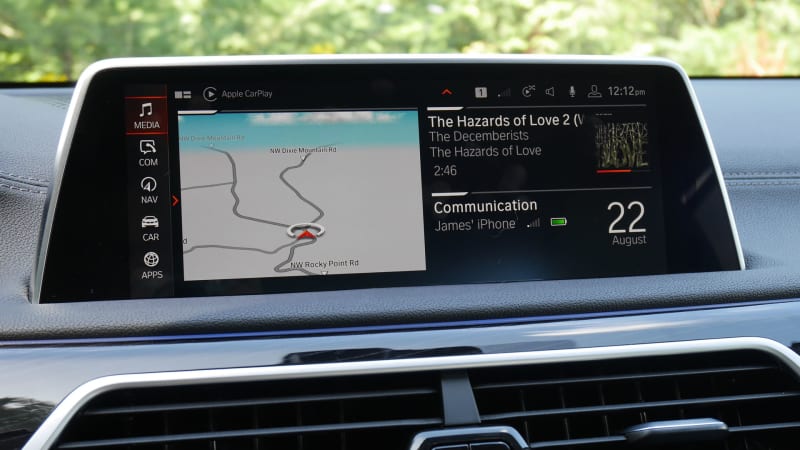 The current-generation 7 Series helped usher in a more overtly luxurious era for BMW interiors, with glitzier materials and a more visually interesting design that move further away from the brand's historic austere norm. While successful in that endeavor, the 7 Series doesn't possess the sort of opulent vibe of a Mercedes S-Class or high-style distinctiveness of the Lexus LS. That's a matter of taste, however. In terms of quality, there are certainly no complaints, and there are ample options available to spruce things up like quilted leather seats, an Alcantara headliner and extended wood trim.

The 2020 7 Series is dominated by technology, which is immediately evident when you sit down in the driver's seat to greet the new all-digital instrument panel and the carryover 10.25-inch iDrive infotainment display. The latter is a touchscreen, but there's also a redundant control knob and natural voice recognition controls that we discovered work pretty well. Using natural speech, it successfully found a hotel by name on the first attempt. Less successful is the system's interaction with Apple CarPlay, which is only included as part of a one-year trial subscription. It's standard or optional for a one-time charge in the cars of other brands.

The back seat can also get its own tech, with an optional pair of massive entertainment screens that come with BMW-branded headphones. Included with them is a tablet integrated into the middle seat armrest that allows passengers to control various vehicle functions. 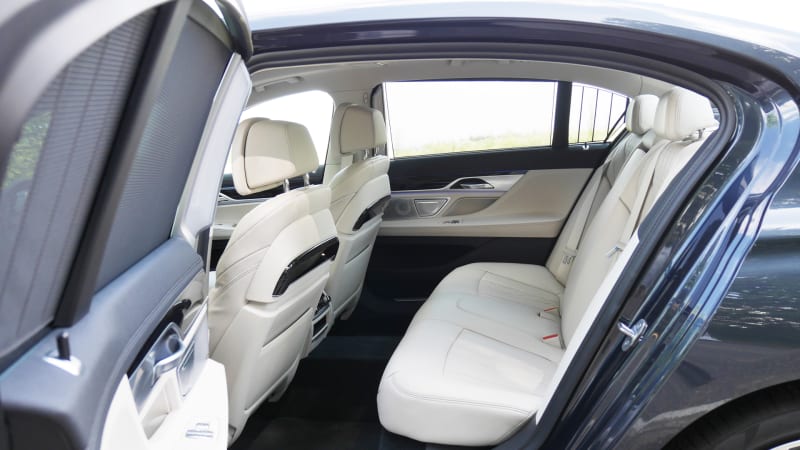 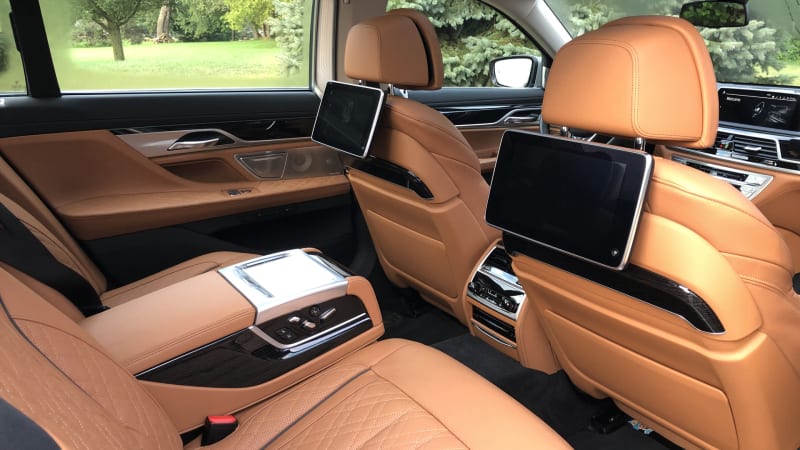 How big is the BMW 7 Series?

Unlike in the past, there is only one body length for the 2020 7 Series. Effectively, it's the equivalent of the old extended L model, and as a result, you can expect a colossal amount of back seat room. You certainly don't need to opt for the $3,900 Luxury Rear Seating package that adds adjustable, massaging, heated and ventilated outboard seats with squishy headrest pillows – but it certainly doesn't hurt. We tested the 7 Series with and without it, and must say, the extra comfort it affords is well worth the extra cost relative the already lofty price tag.

The 2020 BMW 740i models, both with standard rear-wheel drive and optional xDrive all-wheel drive, have a 3.0-liter turbocharged inline-six that produces 335 horsepower and 330 pound-feet of torque. It punches well above its weight class, though, delivering this big sedan from 0-60 mph in a swift 5.3 seconds (according to BMW estimates). Fuel economy is also quite excellent at 22 mpg city, 29 mpg highway and 24 mpg combined with RWD. The addition of xDrive only lowers those figures to 20/28/23. In a week with a 740i xDrive, including a six-hour highway road trip, we managed 28.6 mpg. That's excellent for such a big, powerful sedan.

The 745e xDrive is a plug-in hybrid consisting of an inline-six engine and an electric motor fed by a 12-kWh lithium-ion battery pack. Combined system output is 330 hp and 389 lb-ft. BMW estimates it'll hit 60 in 4.9 seconds. EPA estimates indicate it'll go 16 miles on its plug-in electric charge, achieve 22 mpg combined thereafter, and is rated at 56 MPGe. Note that its 290 miles of total range is substantially lower than the 740i, which can go more than 550 miles on a tank.

It's now been quite some time and multiple generations since the BMW 7 Series was considered the most driver-oriented flagship sedan. Today, for better and for worse, it's a more comfort-focused, high-speed cruiser in keeping with the Mercedes S-Class. Indeed, its standard air suspension delivers a pillow-like ride that sops up bumps, the cabin is casket-quiet, and its steering is nice-and-easy at low speeds and easily held steady at higher ones. It all amounts to a car that reduces fatigue significantly on long journeys.

Now, if you are looking for a driver-oriented flagship, the 7 Series will be a bit disappointing. The steering is pretty numb and not as sharp even in the sportiest of drive modes, and although the Carbon Core structure is abundantly stiff and the suspension expertly tuned, this is really not a car you strive to take corners in. If you are looking for a big car with more verve, the Porsche Panamera is a better choice, and believe it or not, so too is the new Lexus LS.

On the other hand, no 7 Series is slow. Miles from it. The 740i xDrive we tested delivered abundant acceleration, with smooth low- and mid-range power courtesy the turbocharger. You absolutely do not need a V8. Still, the revised-for-2020 750i and its 523-hp turbo V8 gives this jumbo sedan sports-car acceleration. It flattens you into your seat no matter the speed, yet does so without any uncouth exhaust crackles, pops or blats. That there are actually more powerful 7 Series – M760i and Alpina B7 – is a bit mind boggling. If anything, they should be appreciated as much for tightening up the driving experience in general to get closer to that sport-oriented 7 Series expectation of old.

What more can I read about the BMW 7 Series?

Read more about what changed for 2020, in our more comprehensive rundown of changes.

We run down the changes specifically made to the Alpina, and review what it's like to drive on the Autobahn. 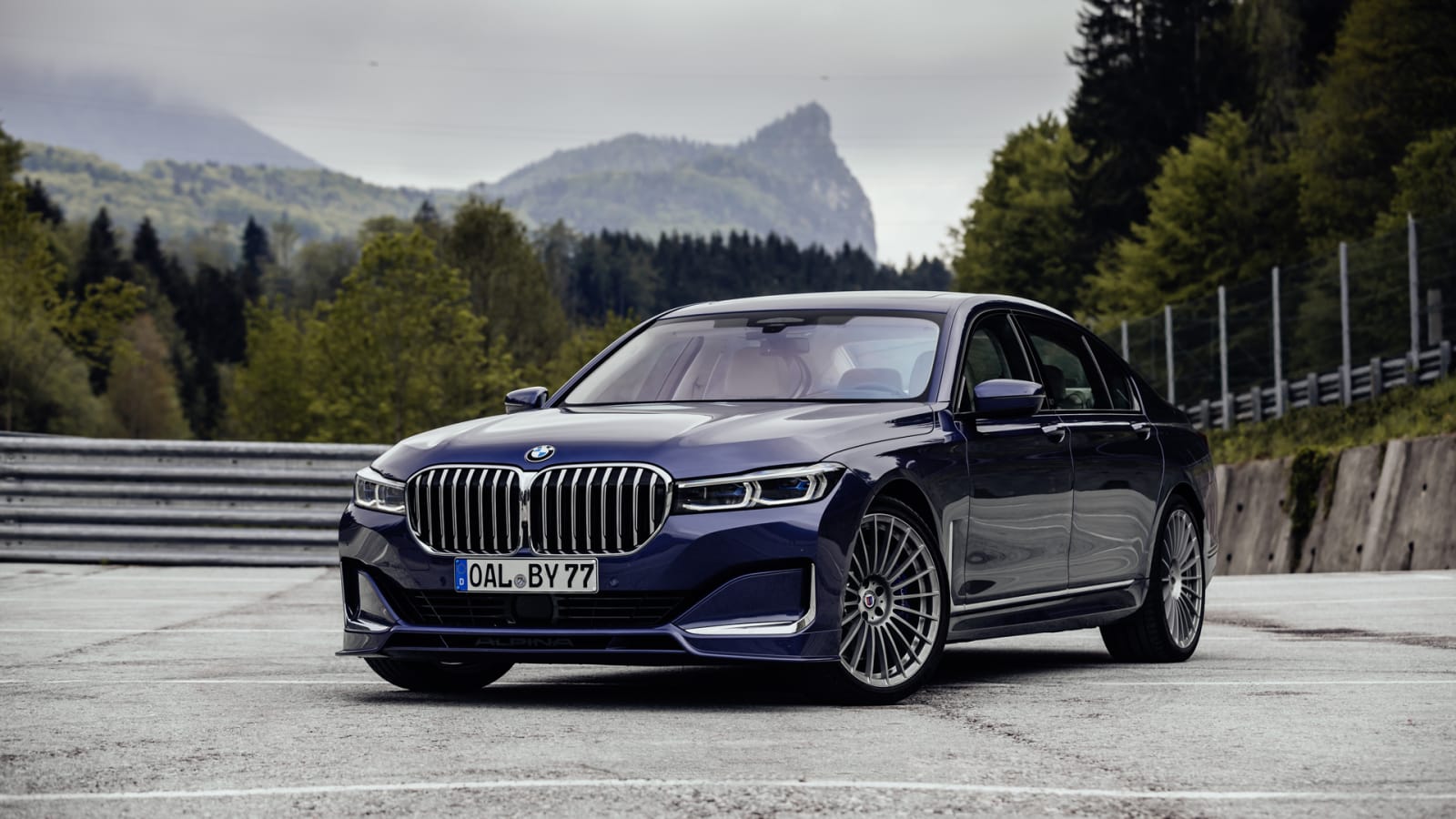 Our first and only driving impressions of the range-topping, V12-powered M760i, including time driving on a track. Although it gains the same styling and interior updates for 2020, our broader findings remain the same.

The current-generation 7 Series dates back to 2016. Read about our initial impressions of it here, including in-depth information about its engineering and design.

What features are available and what's the 7 Series price?

There are five 2020 BMW 7 Series models, all of which correspond to a different powertrain. Only the 740i can be had with rear- or all-wheel drive. All others are AWD only.

Feature content for each is substantial, and rather than exhaustively list it here, you can find a full breakdown of features plus specs and local pricing for each version of the 2020 BMW 7 Series in the links below

The 2020 7 Series has not been crash tested by a third party. 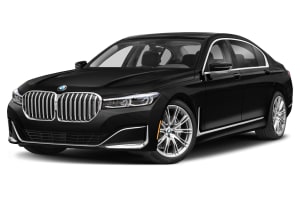