A moment of EV Schadenfreude caught on video 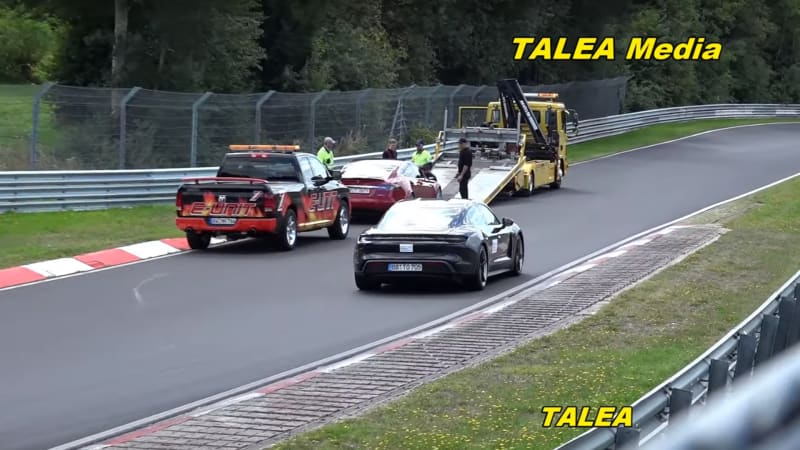 With the Porsche Taycan about to compete with Tesla in the marketplace, Elon Musk has decided to compete with Zuffenhausen’s finest on the track. After a Taycan Turbo set a record for fastest EV around the Nürburgring Nordschleife in just 7 minutes and 42 seconds, Tesla is scrambling to best that with modified Model S P100D prototypes that Musk says will eventually become a production model. A Ring record attempt could come any day from Tesla — but not today, when Nürburgring videographers caught the Taycan lapping the Model S not once, but twice as the Tesla sat broken down awaiting a tow:

A couple of weeks ago, Musk promised a Model S would be at the Nürburgring after claiming that a Model S prototype beat the record for a four-door sedan at Laguna Seca. Though a track spokesperson pointed out that Tesla's run wasn't a record because nobody was officiating.

Model S prototypes nicknamed Plaid are also in Germany, with decidedly non-production aggressive body work, more power, and sticky Michelin Pilot Sport Cup 2 R competition tires. One of our spy photographers also noted that the car has been stripped of its interior except for the driver's seat. The spies tracked a Tesla in practice at the Nürburgring. and calculated it could undercut the Taycan by almost 20 seconds. That said, Porsche set the Ring record in a Taycan Turbo, not a Turbo S, so there's still an arrow in its quiver.

The breakdown contrasts with Porsche's stated goal for the Taycan: repeatable high performance, demonstrated recently when an automotive journalist put the EV through dozens of sprints to 124 mph.