The long-anticipated 2020 Honda CR-V Hybrid was announced yesterday, and although we don't have every spec available (including the all-important official fuel economy figures), Honda provided enough that we can piece together a comparison of powertrain specs and dimensions. The same can be said of the 2020 Ford Escape Hybrid, which we just drove for the first time.

Together, they represent a significant increase in the number of compact crossover hybrids, as the current total is one: the 2019 Toyota RAV4 Hybrid. The old Nissan Rogue Hybrid has been discontinued, leaving the subcompact Kia Niro Hybrid as the only other vehicle in the ballpark. As you'll see below, its size and performance are much different than the others, but its fuel economy and price are superior. 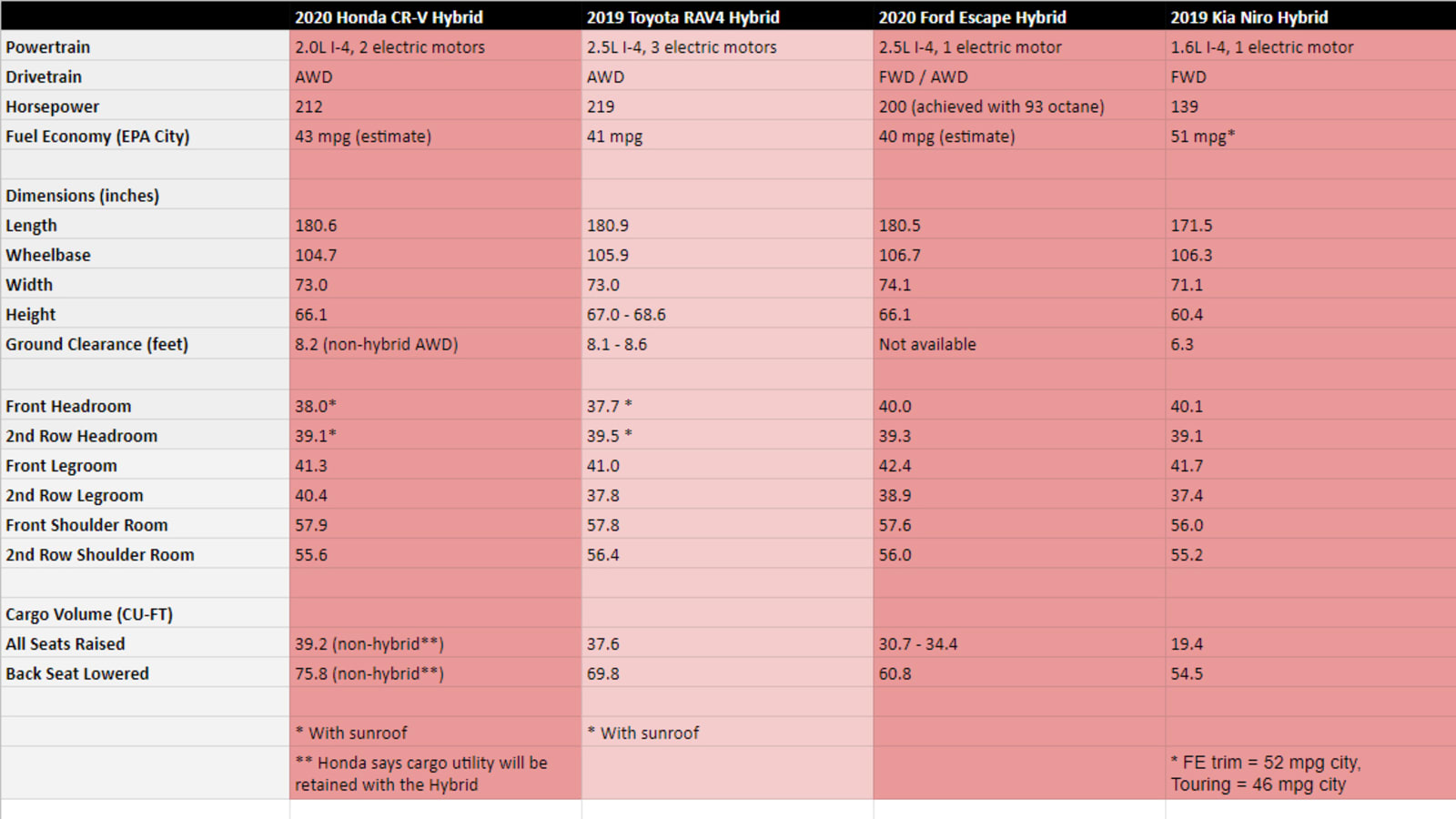 The RAV4 Hybrid is the performance champ of the group, but both it and the new CR-V Hybrid are actually more powerful than their respective gas-only siblings. Although the added weight of its battery pack negates much of that horsepower advantage, the RAV4 Hybrid's subsequent acceleration is indeed a smidge quicker than the gas-only version. It will be interesting to see if that's the case with the CR-V.

By contrast, the Ford Escape offers a 250-horsepower 2.0-liter turbo engine, meaning the hybrid variation is most definitely not the Escape's highest-performance offering. Nevertheless, the Hybrid does produce more power than the base 181-horsepower 1.5-liter three-cylinder. The Niro, meanwhile, brings up the rear in terms of performance, but Kia estimates a perfectly acceptable 0-60 time of 8.6 seconds. The others are likely in the mid-7-second range.

This is ultimately an open question since we don't have official figures for the CR-V and Escape. Based on Honda's estimate of the CR-V Hybrid being 50% more efficient in the city than the gas-only version, our calculators say it should get 43 mpg in the city. Then, based on information provided on the Escape Hybrid first drive and some more calculation, our best guestimate for it is 40 mpg. Either way, given how mpg is calculated, any potential differences between them in terms of actual fuel burned should be negligible.

On the other hand, most Kia Niros sold get 51 mpg in the city and 49 mpg combined. According to the EPA, that translates to an annual average fuel cost of $750. The RAV4 Hybrid, by contrast, is $900.

Note that the CR-V and RAV4 come standard with all-wheel drive. That's a result of their hybrid powertrain designs, but nevertheless, it's significant. All-wheel drive is optional on the Escape, but not available at all on the Niro. 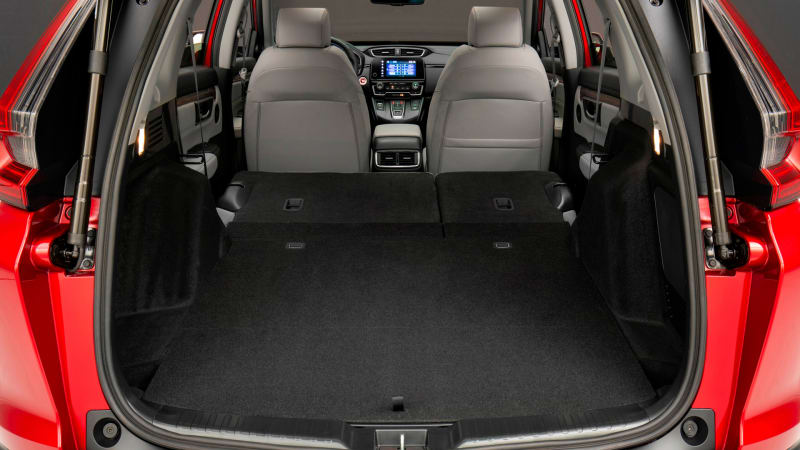 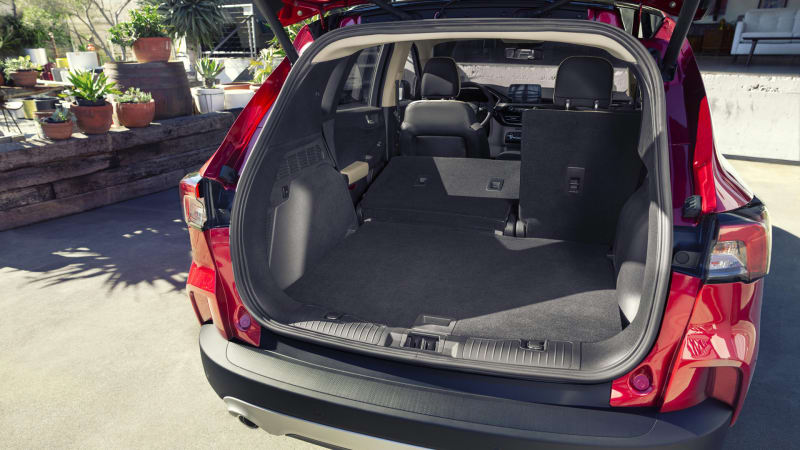 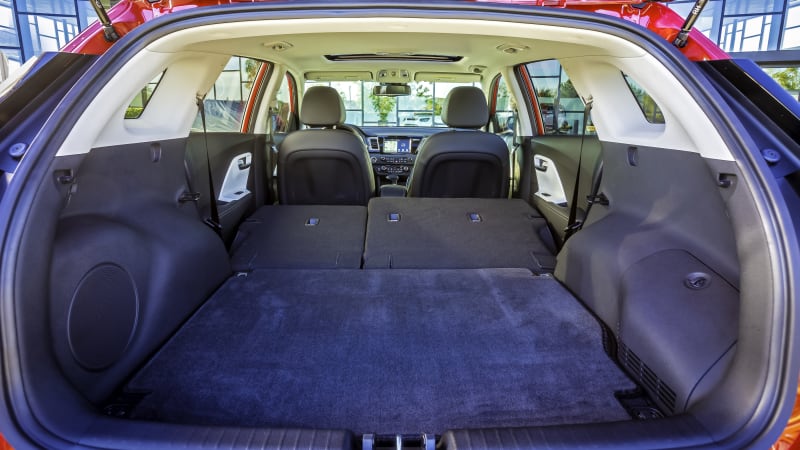 The Honda CR-V is a wonder of interior space, regardless of whether a whole bunch of batteries are stuffed under its cargo floor. Honda says that placement still maintains the CR-V's superior cargo capacity, which we indicate above, but there was no word about what happens to the spare tire. Something to note for the future.

One thing to expand upon about the Ford Escape: Its back seats slides to free up extra cargo space, hence the range of numbers listed above. In any configuration, though, the Escape Hybrid has appreciably less cargo space than its Honda and Toyota competitors. It's substantially better than the Kia, which is not surprisingly the runt of the group. Surprisingly, though, the Niro's passenger space dimensions are really not that far off the others. If your space demands are more on the people side than stuff side, don't be so quick to cross the Niro off your list.

In any event, this is the other area where the Niro is worth serious attention. It starts at $24,535, including a $1,045 destination charge. Base equipment levels are comparable to the others, if even a bit stronger in certain areas as a touchscreen and Android Auto come standard.