The Loadhandler pickup cargo unloader review | Crank it out

Gimmick or time-saver? The Loadhandler is put to work A little while back, we ran a video showing off the Loadhandler, which is an accessory that uses a hand-crank and a heavy-duty sheet to quickly unload stuff from your bed. It’s not quite a dump bed, but it also promised to be a LOT less labor intensive than using a shovel or a push-broom to unload the landscaping materials or the like. The video was intriguing — showing folks effortlessly unloading brick-filled rubble and stacks of concrete bags — and it struck a nerve with Autoblog readers. So we decided to ask the company to send us one to test out.

They did, and quickly. The unit arrived on our doorstep with no other preconditions, as is standard for our gear reviews. We’re going to tell you just how well it worked on our personal 1998 Toyota Tacoma pickup. The test load? 1.25-inch drain rock, in half-yard loads, to cover a walkway in our side yard.

We’d just spread a few bed-loads of landscaping bark around, and even though that stuff doesn’t weigh very much, the time spent shoveling and then sweeping out the bed wasn’t much fun. Heavier round gravel? No thanks. If the Loadhandler is worth its weight (and cost), it should make quick work of the task. 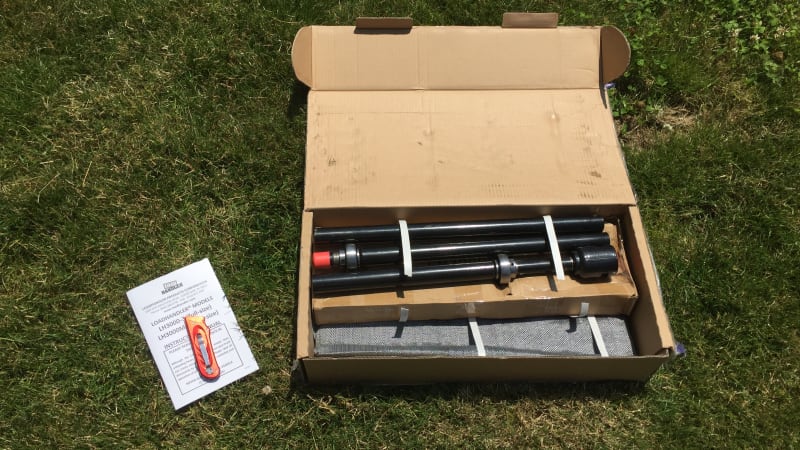 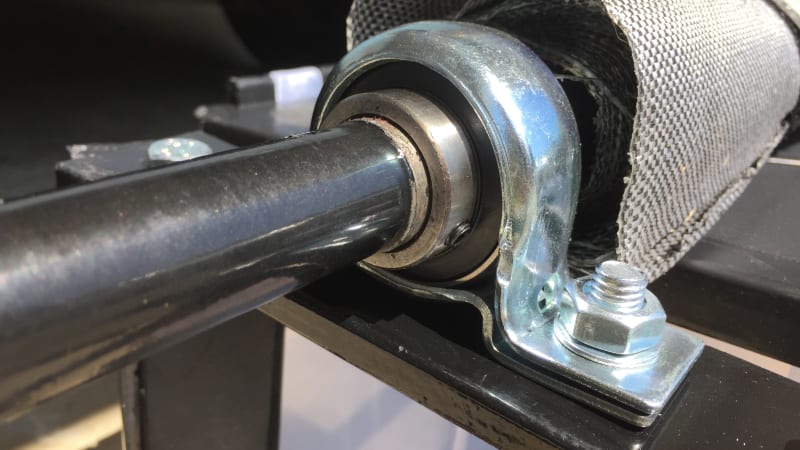 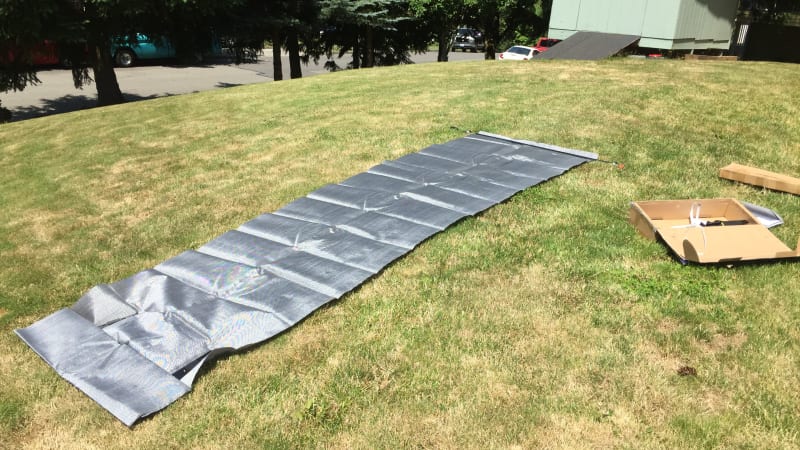 There are two models of Loadhandler — the $109 LH2200, with lighter duty construction, and the $179 LH3000 that we tested with steel bracket and sealed bearings. We unpacked the box and took a look inside. The LH3000 is a sturdy piece of equipment, and the mounting brackets are heavy. Assembly isn’t difficult, but it’s a bit fiddly to actually install and you’ll probably want a helper nearby to steady it while you tighten things down. The biggest fitment issue was the width of the bracket that hugs the tailgate itself. Either the LH3000 is too wide, or our tailgate is too narrow. It didn't shift or slip in usage, but we would have preferred a snugger fit. Newer, thicker tailgates probably won’t face that issue.

Tightening the nylon web straps down revealed that toothed, spring-loaded keeper is a bit of a pain to use. We think Loadhandler could have spent a few bucks and used a ratcheting system, like you’d find on a ratcheting tie-down strap, for quicker and more secure tightening. That’d make it easier to remove and reinstall, too. Once we had it snugged down, we were surprised by how stable it was. It did shift a little bit during use, as you can see in the video below, since the brackets weren’t snug up against the tailgate to prevent all movement. In retrospect, we’d have trimmed the end off a 2x4 and used it as a wedge to take up the airspace between the bracket and tailgate. But it didn’t affect the functionality.

One thing we would recommend, for heavy loads like the gravel, would be a mat or even a sheet of plywood to go on the floor of the bed underneath the Loadhandler’s mat. Our spray-in bed liner created a lot of friction on the bottom of the mat, making it harder to crank out the load. While it was still fairly easy to get the load moving, we weren’t a fan of the resistance and the strain it put on the straps or the rubbing on the load mat. Loadhandler sells an accessory called the “Doubl Mat”, which is grippy on one side and slippy on the other, which sounds perfect for the application. But it’s $79, and a trimmed piece of wood or plastic would probably do the same job for a lot less. If you’re using the Loadhandler all the time, the mat might be worth it.

Unloading the gravel was a snap, as you can see in the video above. One thing we neglected to do, which we should have and the manual recommends, is attach the strap from the tailgate to the bumper to hold it down. You can see the tailgate lifted up slightly before settling down under the load in the second half of the video. Do as we say, not as we do, and all that.

The sturdy crank gives plenty of leverage, and the vast majority of the load was out of the bed in a matter of seconds. A bit remained along the sides, and in the tailgate jamb, but there’s not much you can do to avoid that whether you’re using a shovel or a Loadhandler. It made a hard job that much easier, and was definitely worth the time to assemble and install for the two loads of gravel I moved. If you had a more extensive landscaping project than I did, you might find something like this a time- (and back-) saver.

What we’re less sure of is where the break-even point is. How much shoveling is worth $180 to you? There are cheaper alternatives out there, like this 2,000-pound model we found on Amazon, but we can't vouch for how they work or the quality. We gladly used the Loadhandler we were sent to evaluate since we didn’t have to make that call. Anyone with ongoing landscaping projects or load-moving needs might make that call — especially if they’ll be working solo.

At this writer’s house, we’re considering a much larger landscaping project involving terracing our sloping front lawn — a job that’s going to take a dozen or more truck-loads of material. When it comes time to haul over bark, sod, and/or landscaping gravel, a Loadhandler would be mighty appealing.

This is not intended nor should be used as a guide to installation or use. Please refer to the owner's manual for proper use and installation of this product.