Worldwide production is limited to 750 units

BMW has released a limited-edition variant of the M4 coupe, developed in honor of its M division's 48th anniversary. While that's an unusual milestone to mark, the M4 Edition ///M Heritage is likely the coupe's swan song, and a sign that its replacement is right around the corner.

The interior is decked out with contrast stitching color-coded to each available hue, a bevy of carbon fiber trim accents, plus a sprinkling of model-specific badges that will let your passengers know they're not riding in a regular M4. Leather-upholstered sport seats come standard.

The M Heritage edition is based on the M4 coupe equipped with the optional Competition Package, so its 3.0-liter straight-six engine is turbocharged to deliver 444 horsepower at 7,000 rpm, and 406 pound-feet of torque between 2,350 and 5,500 rpm. Rear-wheel drive is the only configuration offered, but BMW lets buyers choose between a six-speed manual transmission and a seven-speed, dual-clutch automatic controlled via shift paddles. The M4 takes 3.8 seconds to reach 60 mph from a stop in its quickest, two-pedal configuration.

BMW plans to build 750 examples of the M4 Edition M Heritage, though it hasn't revealed what percentage of the production run will be earmarked for the American market, or how much each one will cost. All variants of the next-generation 4 Series are nearing the end of their respective development cycle, so we expect to see the second-generation M4 sooner rather than later. 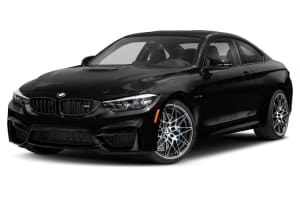