It'll be offered by Bonhams at the Goodwood Revival

Nobody is looking to buy a well-used Volvo FL6 box truck for $2 million. Unless … the exterior of said box truck was used as a canvas by the anonymous artist known as Banksy. That’s exactly what we have here, listed as auction-ready by Bonhams. It’s set to hit the block at the auction house’s Goodwood Revival sale, and is estimated to pull in between $1.3 million and $2 million.

As art typically does, this piece has a name. You may refer to the truck as “Turbo Zone Truck (Laugh Now But One Day We’ll Be in Charge).” Yeah, the name is a bit lengthy, but whatever, it’s art. Banksy reportedly worked on the truck for two weeks after having started on it during a Spanish hillside party to celebrate the new millennium back in 2000. Banksy was only an obscure graffiti artist back then, so nobody thought much of it. We know things are much different these days, which explains the sky-high price tag predicted for the work.

Throughout its lifetime, the truck traveled through Europe and even made an appearance in South America as part of Turbozone’s (a touring company known for extreme pyrotechnics) show entitled Cinderella. 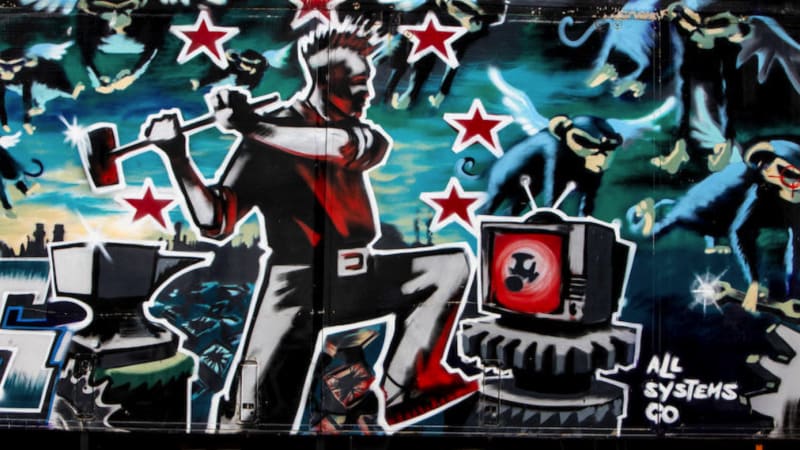 The question remains, what exactly are we looking at here? Bonhams says the “overriding message is one of anarchy.” It shows how Banksy’s calls for anarchy and social change have been important to his work for a long time, even before his name was known around the world. Hammering, red stars, flying monkeys and soldiers can all be found on the truck. You can read even more analysis and deeper into the meaning of things at Bonhams’ listing.

It’s likely safe to say that this truck isn’t going to self-destruct like Banksy’s “Girl with Balloon” painting did (shredding itself) during that piece of art’s sale. Due to the size of the Volvo box truck, this piece is also considered the largest work from Banksy ever created. It’s even larger than the other vehicle graffiti van of his that sold at auction a few years ago. We’ll be interested to learn how much someone is willing to pay for an old Volvo truck. It’ll likely be the most expensive Volvo for quite some time once the gavel drops.