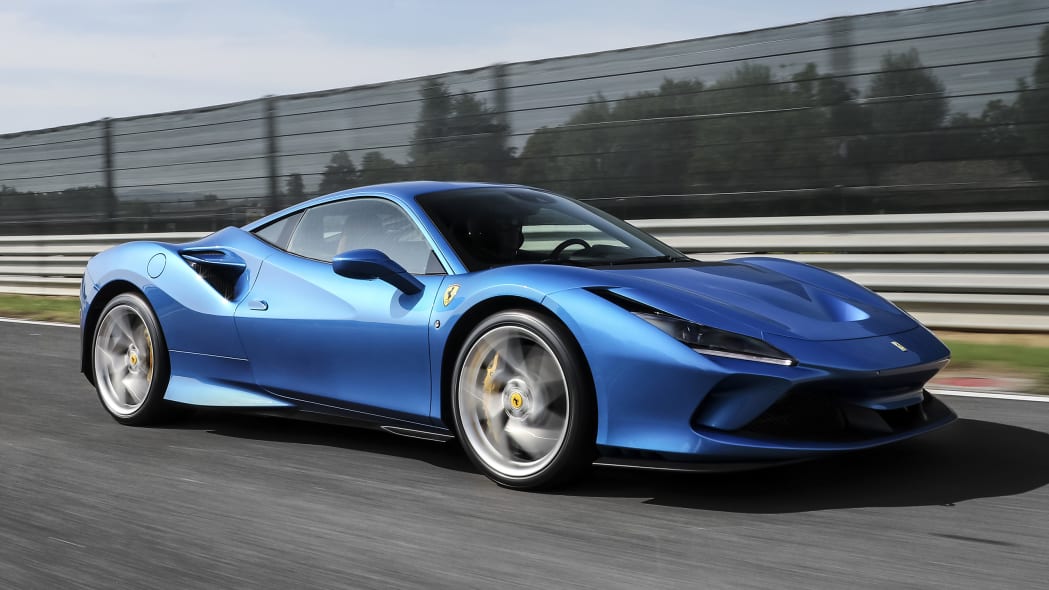 MARANELLO, Italy — What's in a name? Quite a lot in the case of the new Ferrari F8 Tributo launched at this spring's Geneva Motor Show and on sale this winter at for delivery. Tributo is a tribute to the Ferrari V8 – though to nitpick here, Ferrari's first V8 was actually a Lancia, designed by Vittorio Jano for the 1950s D50 grand-prix cars, which were handed over to Enzo for a song when Lancia faced financial collapse. That said, the first road-going V8 Ferrari was the Dino GT4 of 1973. Either way, just four years after the launch of the 488 GTB, Ferrari felt it had license to produce a new version.

“There was space to do a new 488 for the customers of the 488 GTB,” says Raffaele de Simone, Ferrari’s chief test driver, “there were enough new parts and know how. We had an opportunity to open a gap in which we can work and use.”

In fact, the F8 sits somewhere between the 488 GTB and the limited-run 488 Pista. Consider it a stiffened-up version of the former, or a softer version of the latter; Take your pick.  All told, the F8 is the most powerful production mid-engined Ferrari, and at the heart of the matter is the F8’s F154 twin-turbo V8, criticized for its weedy exhaust note and not much else. It's won three handfuls of awards since it was introduced in the 488 GTB. Peak power is 710 horsepower at 7,000 rpm and peak torque is 568 pound-feet of torque at 3,250 rpm. It’s almost a straight lift from the 488 Pista, and thus makes 49 hp more than the 488 GTB. However, Ferrari shaved a remarkable 40 lbs off of the engine for duty in the F8, thanks to bits like a lighter flywheel and titanium connecting rods. The engine drives the rear wheels via a Getrag seven-speed, twin-clutch transmission and Ferrari's own electronically controlled limited-slip differential. This is likewise nearly unchanged from the Pista, although its gearchanges have been made less abrupt than that car’s. Ferrari engineers referred to them as “gunshot changes”. 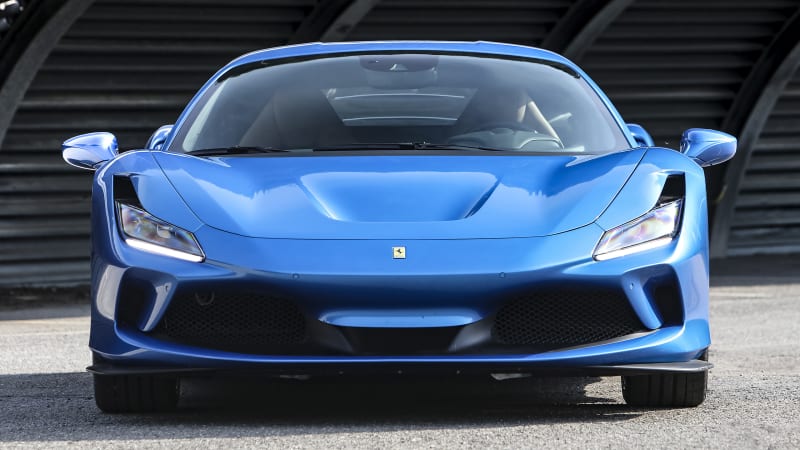 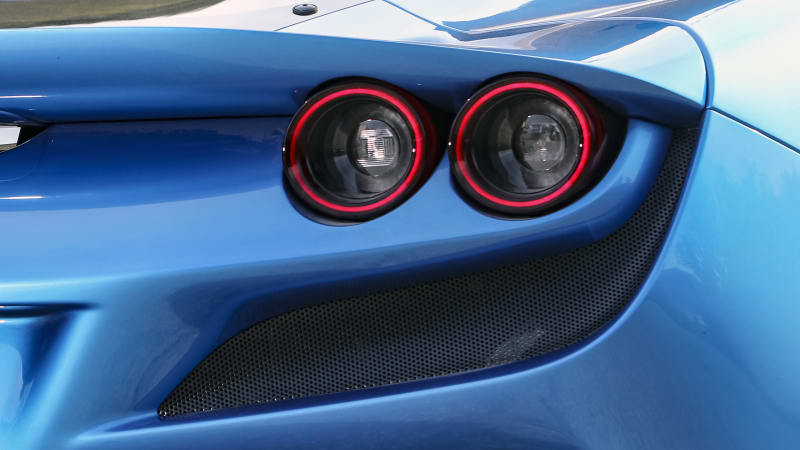 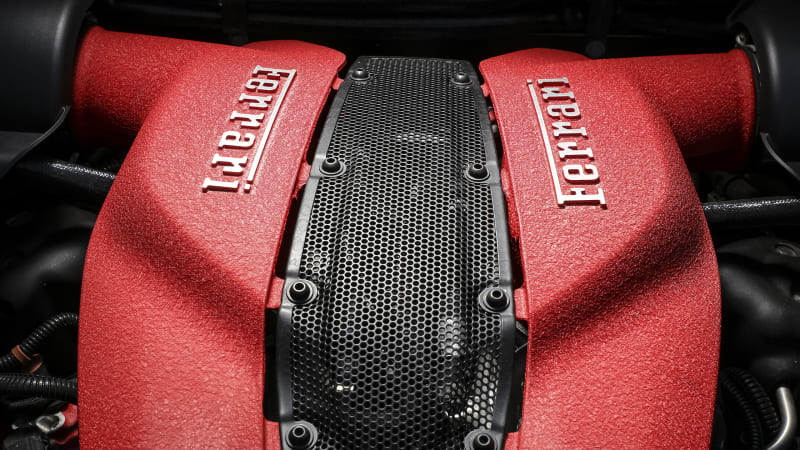 Top speed is 211 mph, with 0-62 mph in 2.9 seconds and 0-124 in 7.8 sec. A warning note, however, is that these performance specs are predicated on a reduction in curb weight of 88 lbs over the 488 GTB (to 3,163 lbs), and this number includes optional lightweight parts, of which 22 lbs are derived from a set of carbon-fiber wheels that are not currently available and don’t have a price tag yet.

As well as the 488 Pista's tweaked camshaft profiles with more valve lift and duration and more advanced ignition timing, there are unique inlet tract and inlet plenum changes to smooth the F8's power delivery. A redesigned exhaust manifold and freer-flowing exhaust system has lower back pressure which makes the particulate filter more efficient. And while it might not have the yelping charisma of the old naturally-aspirated V8 in the 2009 458 Italia, the F8's engine holds a better tune and reacts marginally quicker than rivals such as the Ricardo-designed and -built V8 in McLaren's series of rival supercars. For all that, however, on part throttle openings it drones badly and you've really got to rag it to make it sound at all great.

The main impression is of the unit's crushing power - it wasn't long ago that Formula 1 race cars struggled to make 700 hp – and the F8 tests the limits of how fast cars should be going on a public road. Go quickly and the traction control light will be lit most of the time and driving the F8 becomes an exercise in self-control and public responsibility - you'd rarely, if ever use full power. I did in one surreal moment as I sped along long Emilia-Romanga avenues filled with dandelion seeds floating in the dappled sun. I downshifted and floored the throttle; The refrigerator thrum to a stentorian blare and the seeds blur and disappeared while my stomach was left where I'd first pressed the throttle. It felt like the opening credits of a Star Trek movie. 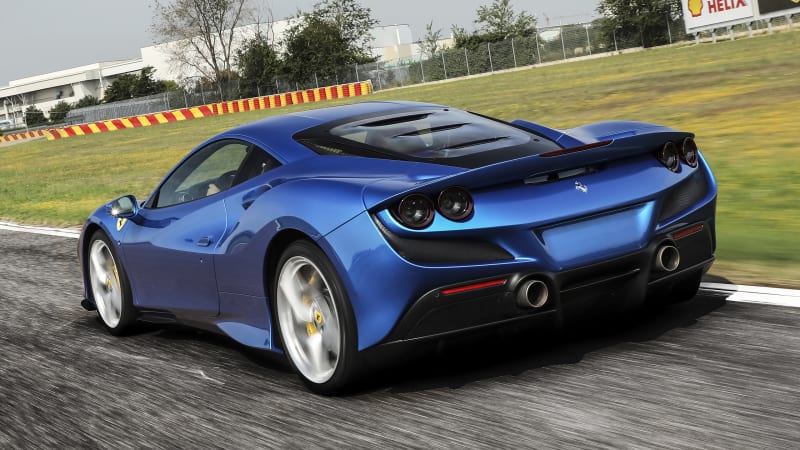 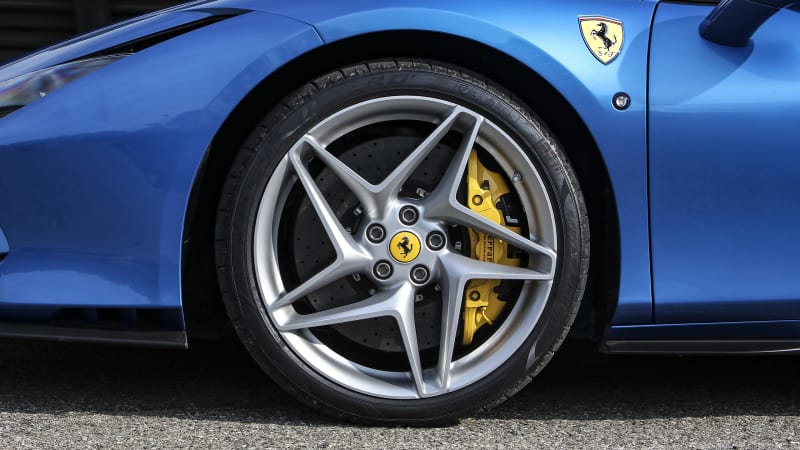 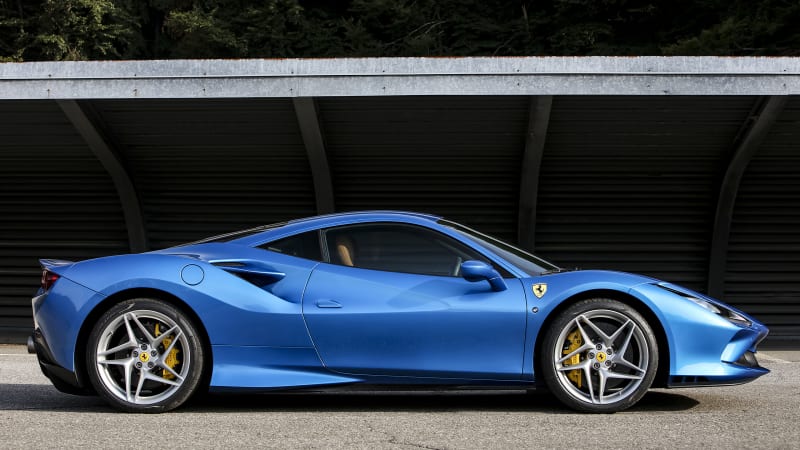 On the track at Ferrari's test circuit at Fiorano, it makes for a mighty machine. You think where you want to go, turn the wheel, ease the throttle and you are there. In that respect the slightly more track focused Race mode is better if you want to nail a time. Turn the steering wheel mannetino (switch) to CT Off which switches out the traction control and the rear pitches into highly entertaining slides at will, but it isn't going to win any silverware.

Out on the road the ride is a lot better than that of the 488 Pista, there's compliance in there and long legs. With softer damping algorithms, but the same spring rates as the 488 Pista, the F8 creates more yaw in the turns, which makes it perhaps less of an ultimate track car, but more entertaining. De Simone explains the aim was to allow owners to change from the 488 GTB to the F8 without having to readjust ... much.

“You can jump from one car to the other very naturally,” he says, “there’s a progression, a flow.”

We drove from Maranello down into the mountains and along the old Futa Pass where in the old days Ferraris did battle with Mercedes, Alfa Romeo and Aston Martin in the Mille Miglia. Those old roads could tell a tale or two. While the surface is cracked and subsided, the F8 tracked straight and true, its wheel travel coping with pretty big bumps as well as sleeping policemen in the small villages, while those 20-inch Michelin Sport Pilot 2 tires grip quite brilliantly. The new smaller diameter steering wheel helps with the accuracy, but those wheel-mounted indicators feel clunky and you lose the fixed shift paddles behind the wheel rim on roundabouts. De Simone says it's too early for wheel-mounted paddles (I think he means they are on the way) and that pupils on Ferrari driving courses are taught to alter their hand position on the wheel as they enter hairpin bends. 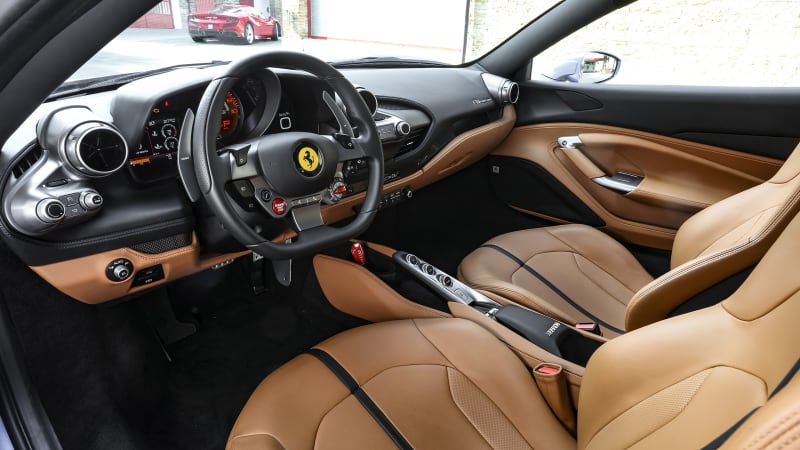 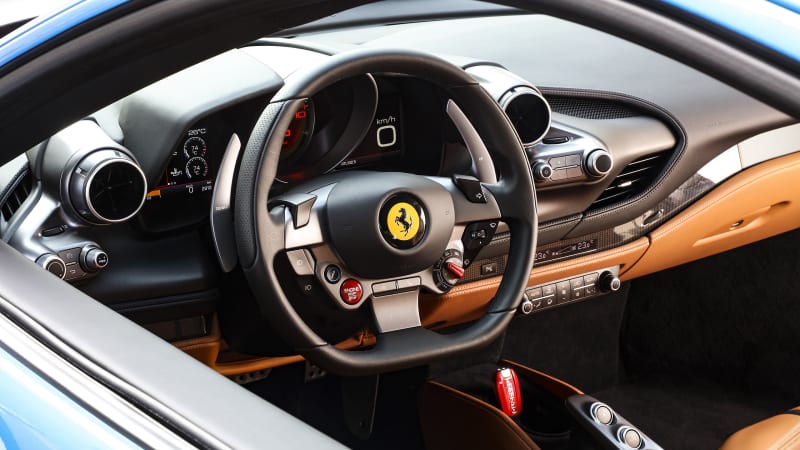 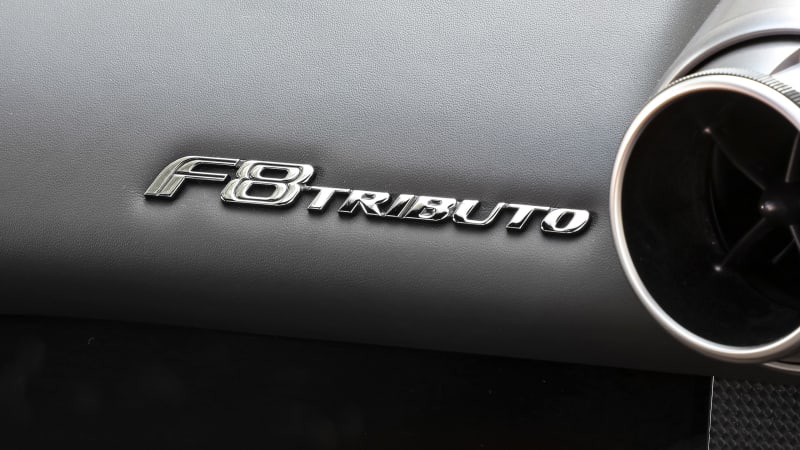 Brakes have never been a high spot with the various derivatives of this car, though they are monster carbo-ceramic rotors with massive multi-pistons calipers. There's been a lot of improvement work, with a shorter stroke for the pedal and more power for the vacuum servo. "It needs more effort,” says de Simone. "It's the biggest thing we ask of our customers." At Fiorano, they're powerful stoppers and they don't fade as the 458's did, but around town they feel erratic.

There are lots of tweaks to the body shell, but F8 is still recognizably derived from the epochal Pininfarina-designed 458 Italia of 2009, even though that famed design house hasn’t worked for Ferrari since 2010. Flavio Manzoni, head of design explains that the relationship with Pininfarina can still "flourish on special cars where historic links are important," though for production cars, it's effectively dead.

"You cannot put a body on a car like a dress anymore," he says referring to the close cooperation that has to exist between designers, engineers and aerodynamicists. Actually, the F8's aero is marginally improved over the 488 GTB with a 5% better coefficient of drag, 10% more downforce and 13 lbs reduced from the cooling system.

It's in the details that the car falls down, however. At the rear round tail lamps are back and the lines are cleaned up, which is fine. But that F40-style, louvered Lexan engine cover looks odd, the headlamps don't fit in the wing cut-outs, the door handles recall disposable plastic spoons, and the way the coachwork curves round the rear of the cockpit looks as though the car's wearing a winter shawl. Overall this is a handsome whip, but Pininfarina had a better grasp of detail. 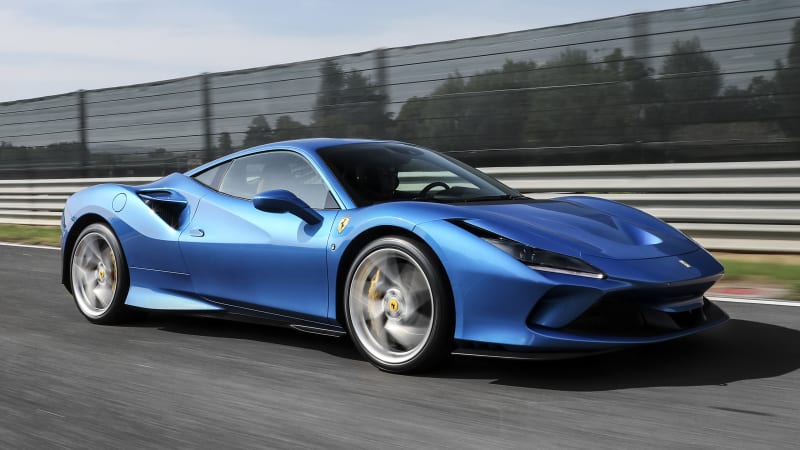 The cabin has been redesigned with a new instrument binnacle, door cards and minutely tweaked displays, yet it still looks more Buck Rodgers than modern-futuristic. On the plus side, once learned, the dash is reasonably easy to use although the navigation system isn't particularly clear, and neither is connecting up a smartphone using Apple CarPlay.

There's room for a briefcase behind the seats, or a handbag, though the door pockets and center console are too small for anything you would conceivably want to put in them. Under the hood is a 7 cubic foot slot, though it gets quite hot in there. The seats are reasonably accommodating and supportive, though the footwell is small and there's not enough space between the pedals for those with big feet. Views out to the front are great, but to the rear they're awful and that polycarbonate engine cover shimmers so badly it's like looking at the world from the inside of a fish tank.

Regardless, the F8 ticks all the boxes – it’s very fast, very cool, and very super – even if it doesn't have the charisma of the old 458 Italia. Given the regulatory climate, it's as good as the it can be right now. But with Ferrari's 1,000 hp SF90 plug-in hybrid now under development, however, one can't help feeling that this might be the swan song for the old conventional flat-plane-crank Ferrari models.  Others seem to think so, too: Waiting lists for the $274,280 F8 Tributo are between 12 to 18 months, so if you want to pay tribute, you'd better get your name down.