It may have 400 horsepower, but it's not sporty. Instead, think calm, composed, classy.

NAPA VALLEY, Calif. – We're in Yountville, a town that's equal parts hoity and toity. The restaurants are adorned with the names of Top Chef Masters and the gas station offers wine tasting. A store that exclusively sells Panama hats will be opening soon. It's in places like these where the 2020 Lincoln Aviator needs to be taken seriously. When the local bakery is a Bouchon, chances are the local populace isn't going to be fooled out of their Audis, BMWs and Mercedes by sub-standard merchandise. The Aviator needs to be the real deal.

It is. There is a sophistication to its engineering and driving experience, plus a distinctive, tasteful style that should collectively meet lofty expectations and attract the desired inquisitive responses from fellow Yountvillians. Indeed, this three-row luxury crossover is no half-hearted, badge-engineered effort as Lincolns of the past were. Though it shares its rear-wheel-drive architecture with the new Ford Explorer, the two differ greatly, and Lincoln's own engineers casually speak of the advantages of "developing their own platform from the ground up." As in, this platform is as much their baby as Ford's, and not something that was sent over from HQ with orders to slap on some different styling and call it a day.

For instance, the front and rear suspension designs are different, in part to accommodate the Aviator's unique pair of available damping systems: standard adaptive dampers and an optional air suspension that's height-adjustable, load-leveling and reactive to input from a forward-facing camera to pre-set itself for bumps in the road. We only sampled the latter, and despite our test Aviator being shod in massive 22-inch wheels, it soaked up the gnarled pavement around Napa Valley with no nervousness over smaller bumps or impact harshness over bigger ones. It also doesn't bound about as the springy new Explorer does. The Aviator is impressively planted, even in its most comfort-oriented driver mode of "Normal," and possesses a composure that was not expected given Lincoln's emphasis on comfort, effortlessness and "quiet flight."

Indeed, the Aviator can be hustled quite capably around some pretty serious mountain roads thanks to the advanced suspension and inherent chassis balance afforded by its rear-drive-based architecture (all-wheel drive is optional). Though the standard steering ratio and tuning is unique to Aviator, we sampled the available adaptive steering, which is paired with the air suspension and alters the ratio and effort based on speed. Thankfully, it's not overt in this adaptability. Its effort is consistent and natural, there's no slack on center, and turn-in is crisp in the Normal driving mode. Selecting Sport mode, or rather "Excite," dials in exactly the right amount of extra weight to provide additional confidence and control when on a twistier road.

Those drive modes also change pedal feel from the electronic brake-by-wire system, with distinctive setups for Normal/Conserve, Excite and the two inclement weather modes. It's a subtle difference and you may not even notice it, yet it's important to note that there's no Individual mode that allows you to mix and match different control calibrations. Lincoln engineers thought that sort of enthusiast-oriented fiddling really wasn't in keeping with the Aviator's character and purpose. Either way, the settings as-is are well calibrated and appropriate for the situations they're intended for. We wouldn't have fiddled with them anyway. 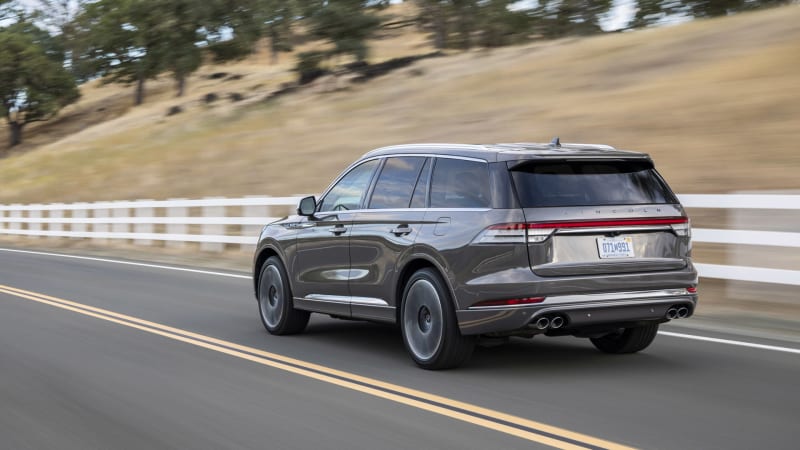 One commonality between Explorer and Aviator is the engine – sort of. Shared with the Explorer ST but tuned differently, the 3.0-liter twin-turbo V6 produces 400 horsepower and 415 pound-feet of torque. That's as much as it sounds. By comparison, the most powerful, gas-only versions of the Acura MDX, Audi Q7, Cadillac XT6 and Volvo XC90 are all around 300 horsepower. The only three-row crossovers that can match or top the Aviator are the vastly more expensive, V8-powered BMW X7 and Mercedes GLS, or the Volvo XC90 T8 plug-in hybrid.

Lincoln didn't provide a 0-60 estimate, but logically, one can assume it should be comparable to the Explorer ST's 5.5-second estimate. The two cousins do not accelerate in a comparable manner, however. Apart from a pleasing snarl when you mash the throttle, the Aviator doesn't draw attention to its massive power when sedately driving. The power is just there if you need it, delivered in the same sort of effortless manner common of smooth, high-powered flagship sedans.

That said, you can pair all 400 of those horses with rear-wheel drive. We only sampled it with all-wheel drive, so we can't yet report whether this three-row crossover can do a burnout. Who knows what they'd think about that in Yountville. Regardless, the Aviator does indeed enjoy a profound performance advantage over its turbo-4 and naturally aspirated V6 competitors. You're bound to notice the difference from behind the wheel, and its 6,700-pound towing capacity is greater than most crossovers. Its fuel economy is a bit worse, though, with 20 mpg combined when paired to AWD 1 to 2 mpg lower than its Acura, Volvo and Audi competitors. A Cadillac XT6 is the same.

Should you be interested in greater fuel economy and performance, there's also the Aviator Grand Touring plug-in hybrid, but we can't talk about that for another two days due to a publication embargo. Stay tuned.

Yet, don't expect any Lincoln Aviator to be sporty. Instead, it is wildly competent in an honest, sophisticated way that's perhaps closest in behavior and character to Mercedes-Benz. At the same time, though, it's not trying to mimic anything, which is most obvious by Lincoln's unique style, particularly inside. No other company's interiors look anything like the mid-century-inspired palace of cool you get in the Aviator, especially with the Black Label trim level and its exclusive color "themes." We sampled "Destination" (rich Mahogany red with cherry-colored wood trim and cream-colored stitching) and "Flight" (black and camel-like tan with piano black and engine-turned metal-but-really-plastic trim). Everything just looks special, making its competitors seem drab and generic by comparison. OK, maybe not the uniquely cool Volvo XC90.

Now, the switchgear and some plastics aren't exactly up to Audi, Mercedes or even Volvo snuff, but the disparity isn't so great that its inherent style can't close the gap. It's also important to note that the Aviator is also more functional than most. The center console has multiple bins with multiple places to store and charge your smartphone. The door pockets are large. The full rear console available with the second-row captain's chairs adds its own sizable bin, cupholders and extra USB ports.

Ten-way power front seats are standard, but our Black Label test cars came with Lincoln's 30-way "Perfect Position" seats that some may find a bit pinchy in places, but nevertheless afford a wealth of adjustability along with massaging functionality. We found them sensational.

The second-row captain's chairs are every bit as comfortable as those in the larger Navigator, and can be heated and ventilated (a 35/30/35-split bench is standard). Access to the third row is typical for a three-row crossover, and aided by a one-button sliding mechanism. The overall space and floor plan is basically identical to the Explorer's, and while we were somewhat underwhelmed by that crossover's third-row space, it's competing with more spacious vehicles like the Hyundai Palisade and Honda Pilot. Against the Aviator's luxury competition, however, the Aviator's aft-most row is far more competitive – the MDX and Q7 are notably less spacious. It's also important to note that the Aviator provides so much space that many may find the larger, thirstier and pricier Navigator unnecessary. That the Aviator has a similarly snazzy cabin design should make it even easier to go the crossover route.

Among its shared elements with Navigator are the 10.1-inch touchscreen mounted so high and within such easy reach that it seems larger. It runs the Lincoln variant of Ford's Sync3 operating system, which is generally easy to use, but as noted in our Ford Ranger Lariat review, has a few usability hiccups associated with the standard integrated navigation and Apple CarPlay. Every Aviator comes standard with a full suite of accident avoidance tech, a 4G LTE in-car hotspot, and Lincoln's new Phone As A Key. It's a secure app that does what its name implies, much as you can with a Tesla Model 3. There's still a key fob, though, plus Ford's trusty old exterior keypad as a backup.

Standard feature content in general is quite generous, making the Aviator's starting price of $52,840 for a rear-wheel-drive model very reasonable. The XC90's T5 and T6 models start on either side of that, every Q7 is more expensive, and only the Acura among the above-listed competitors is considerably cheaper. The XT6 starts at basically the same price. Our loaded Aviator Black Label came with a price tag of $81,790, but keep in mind that if you can live without the special color schemes, you can get virtually the same equipment for about $74,000 on the Reserve trim.

That's a lot either way, but the Aviator seems like it should command that type of money. It's more expensive than an XT6 or an MDX, and in terms of aesthetics and performance, it should be. It also makes a compelling, cheaper alternative to the Navigator or even the BMW X7 and Mercedes GLS, which easily top $100,000 when similarly equipped. Not that folks in Yountville would care about such pedestrian concerns as "price" when selecting their daily conveyance – you can't just drive anything to the artisanal soap shop. But for everyone else, the Aviator's value only adds to its well-rounded, well-executed desirability.