It's priced well into Porsche 911 territory 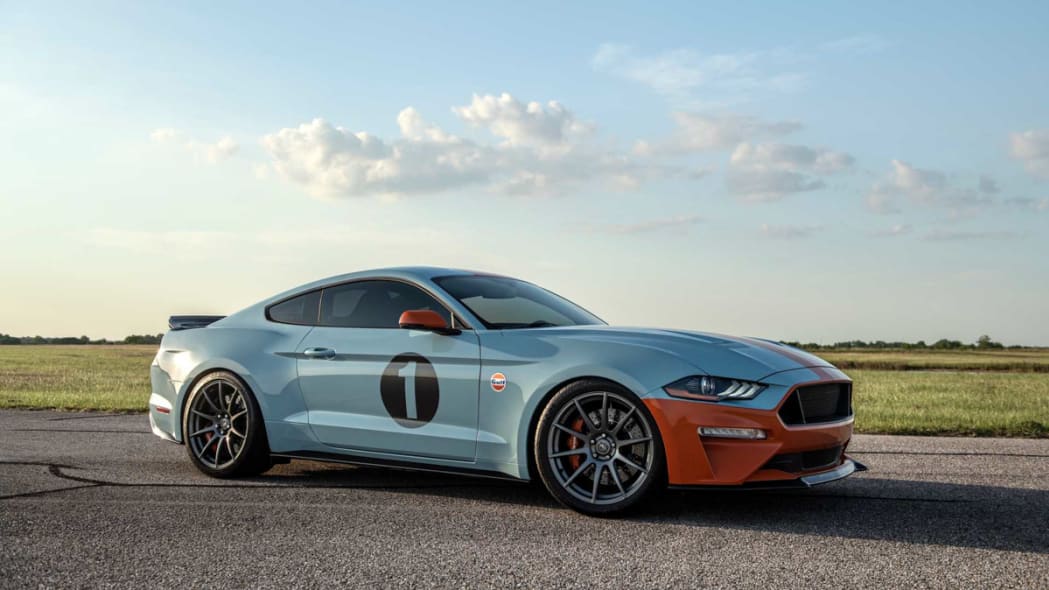 Brown Lee, a Ford dealership in Morrison, Tennessee, created a limited-edition Mustang GT that honors the Blue Oval's illustrious performance heritage while promising to give the 760-horsepower Shelby GT500 a run for its money. The dealer's Gulf Heritage Mustang offers a long list of performance-oriented mechanical and visual add-ons to enthusiasts willing to pay supercar money for it.

The Gulf Heritage Mustang starts life as a run-of-the-mill GT. It gains a light blue and orange Gulf paint job that pays tribute to the GT40 that won the 24 Hours of Le Mans in 1968 and 1969. It's not the first time we've seen this livery on a 21st century Ford; the modern-day GT comes with the same paint job when buyers select the Heritage Edition package. 20-inch alloy wheels finished in a glossy shade of gray and a carbon fiber body kit add a finishing touch to the look.

The space between the Mustang's distinctive blue fenders is occupied by a 5.0-liter V8 engine supercharged to 800 horsepower and 674 pound-feet of torque. It sprints from zero to 60 mph in a little under 3.5 seconds, a figure that makes it about half a second quicker than the Mustang GT it's based on. Buyers can choose whether the cavalry reaches the rear wheels via a 10-speed automatic transmission or a six-speed manual. Neither is available on the GT500, which makes us wonder if they should be reinforced to handle the extra power.

Brown Lee upgraded the V8 with a 3.0-liter supercharger, an air-to-water intercooler, a high-flow air induction system, and beefier fuel injectors. Suspension modifications that make the Mustang lower and firmer help enthusiasts take advantage of the 340-horsepower bump compared to a stock GT. To add context, that's like injecting a 2020 Toyota Supra's worth of power into the Mustang's driveline.

The finishing touch is a metal plaque on the engine bay engraved with the car's serial number; Brown Lee will make 119 examples of the Gulf Heritage Mustang. It's available as a coupe and as a convertible, and pricing starts at $140,000. That figure places it in the same ballpark as other high-horsepower machines like the Nissan GT-R, Acura NSX, Jaguar F-Type and upmarket variants of the Porsche 911. Peddling a Mustang for 911 money is ambitious, but tuners like Shelby and Roush — which Brown Lee often works with — have shown the market is there.