For months, Ford has been slowly releasing more and more information on the upcoming 2020 Shelby GT500. We already know it’s going to be the fastest and most powerful Mustang ever. In fact, it’s going to be the most powerful production car Ford has ever built, eclipsing the Ford GT by 113 horsepower, or roughly as much as a base Ford Fiesta. This week, Ford revealed some more information on the GT500’s 5.2-liter supercharged V8 and new seven-speed dual-clutch. We’re still missing some major figures, but every little nugget gets us more and more excited.

As its displacement might suggest, the GT500’s engine shares more than a little with the naturally-aspirated 5.2-liter V8 in the Shelby GT350. The GT350 makes 526 horsepower and 429 pound-feet of torque. Thanks to a 2.65-liter supercharger making 12 psi of boost, the GT500 makes 760 horsepower at 7,300 rpm and 625 pound-feet of torque from 3,000 rpm to redline. That’s more power than a Chevy Camaro ZL1, Chevy Corvette ZR1, Dodge Challenger Hellcat (but not the Demon or Redeye), Porsche 911 GT2 RS and just about every other car on the road.

The engines are hand-built in the Romeo Engine Plant alongside the engine for the GT350. Compared to the GT350’s engine, the V8 in the GT500 packs larger springs and valves, CNC-ported heads and — most notably — a cross-plane crankshaft in place of the GT350’s flat-plane crank. Ford considered turbochargers, but the parasitic loss from a supercharger was worth it to improve throttle response and power delivery. Ford engineers say the engine makes “well over 850 gross horsepower” before driveline loss. Packaging was a major issue, too. Adding a pair of turbos greatly increases the amount of plumbing needed.

There was a big focus on cooling, too. An air-to-water intercooler sits on top of the supercharger. There are six radiators in total, including cooling for both the oil and transmission. The aggressive front end helps both aero and cooling.

All that power, along with a quick-shifting DCT, 16.5-inch front rotors and a set of Michelin Pilot Sport Cup 2 tires, helps send the GT500 from zero to 100 mph and back to zero in 10.6 seconds. Ford won’t tell us the zero to 60 mph time, but expect something well under 4 seconds. 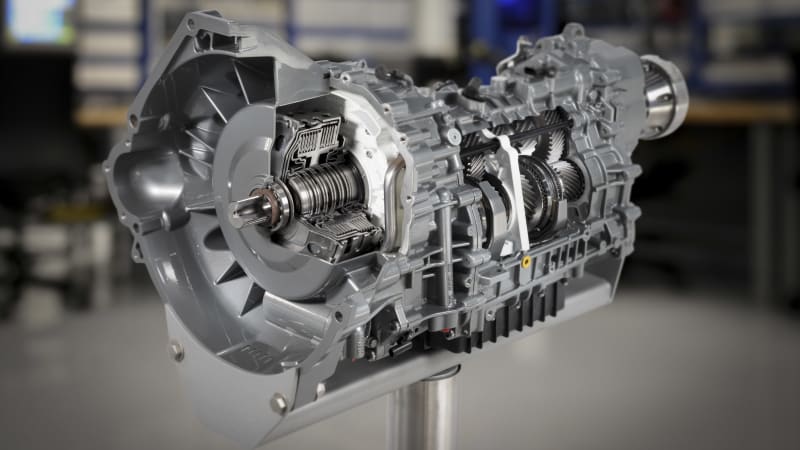 The transmission was developed by Tremec and marks the first time a dual-clutch has been offered in a Mustang or Shelby car. Current Mustangs are available with either a six-speed manual or a 10-speed automatic, the latter equipped in our old long-term 2018 Ford Mustang GT. Shifts with the dual clutch can happen in just 130 milliseconds, though that can vary based on a number of factors. You don’t always want quick, neck-breaking shifts, especially when you’re just commuting around town.

A carbon-fiber driveshaft connects the seven-speed DCT to a Torsen limited-slip differential with 3.73 gearing. Larger half shafts help manage the substantial torque increase over the GT350.

We won’t know some of the final figures for another few months, though we expect to hear more by the time we finally drive the car later this year. If you want your own, find your local Ford dealer and put down a deposit on the $73,995 pony car.