MOAB, Utah – I’d love to put random SUV owners inside the 2020 Toyota 4Runner, and point them toward the console lever inside. No, not that one, the familiar automatic transmission lever – I’m talking about the stubby, silver-capped lever positioned around two o’clock. It's the transfer case selector, of course, but I’m wondering what percentage of today’s crossover owners would know what to do with it, or what “L4” stands for.

Toyota must have thought the same thing, because they put together a brief video tutorial for the 4Runner’s manually operated, two-speed transfer case. It lets you shift the truck between two- and four-wheel-drive (at speeds below 50 mph); or to its low-range 4WD for low-speed rock crawling, driving in soft sand – or wherever you want, frankly.

Yanking that high-effort lever into L4 – don’t forget to stop and shift the transmission lever into Neutral first – is essential on the beautiful desolation of the Hell’s Revenge trail, a slick rock jaunt in Moab. The Toyota’s outstanding Crawl Control can automatically trigger brakes at individual wheels to walk you up or down hills with no human throttle or brake inputs, if those inclines seem beyond a driver’s skill grade.

By now, serious off-roaders – can I get a show of dirty hands? – are rolling their eyes and asking why I’m bothering to explain the obvious. But that’s the point: The 4Runner, and vehicles like it, were once synonymous with the SUV: a steel-frame, truck-based vehicle with genuine four-wheel-drive. Today, the 4Runner is a niche vehicle, including features and capabilities that can seem odd or superfluous to the crossover-driving masses. 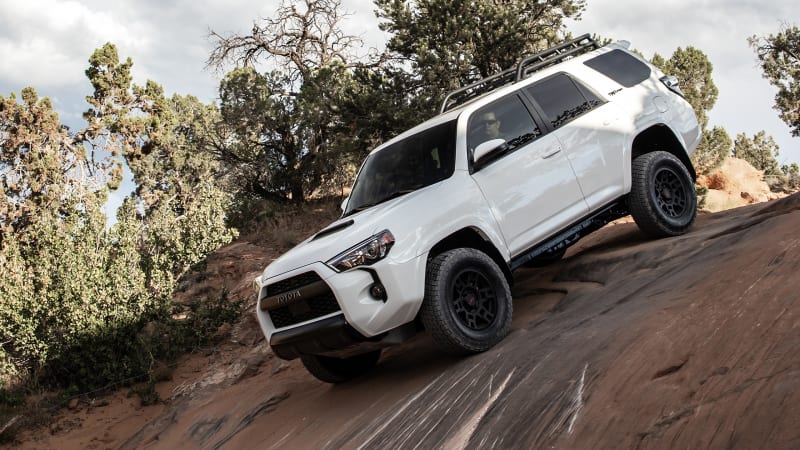 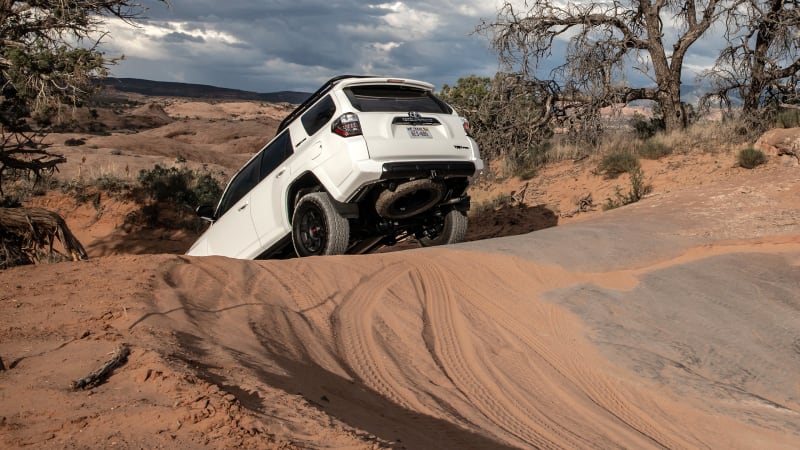 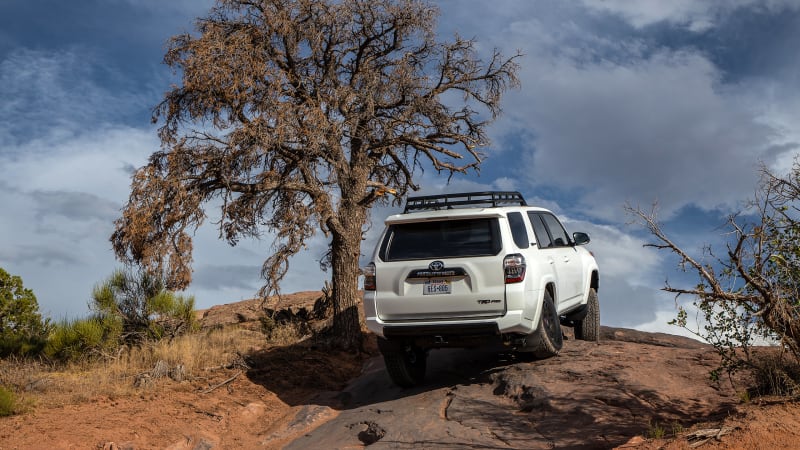 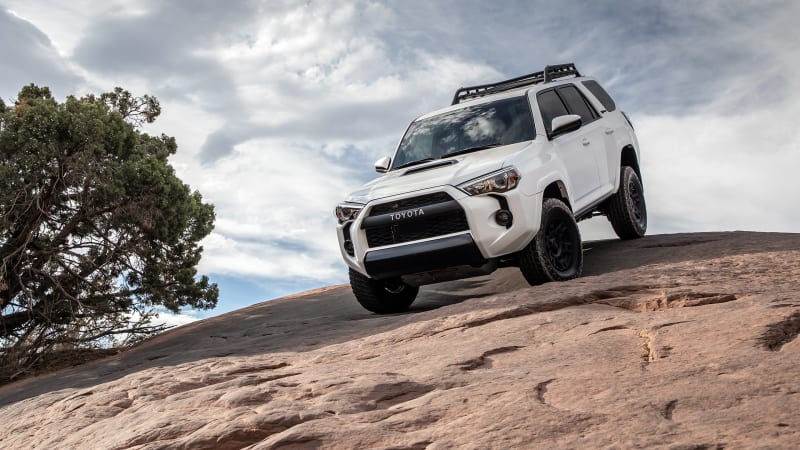 If your lifestyle and geography favors off-road adventure, the 2020 4Runner is as charming and trustworthy as ever. If your lifestyle leans toward commuting, family chauffeuring, or road trips on the Interstate, well, let’s put it charitably: The 4Runner is not the ideal tool for the job. Besides the inherent detriments common to truck-based SUVs, the 4Runner was last full redesigned for 2010. As such, its ride and handling, interior and fuel economy especially (you won’t see 20 mpg on a bet) have fallen behind the competitive curve.

To address some – but not all – issues, Toyota has mildly updated this 2020 version. Grilles are slightly revised, in part to accommodate a new front radar sensor for the previously unavailable but now standard Toyota Safety Sense Plus suite of accident avoidance features: automated emergency braking with pedestrian detection, adaptive cruise control, automated high beams and lane-departure alert with trailer sway control. The 4Runner also adds new wheel designs, including the TRD Pro’s black 17-inch TRD alloys with Nitto Terra Grappler tires. That top of the line trim can also now be had in “Army Green” paint, which like 2019's Voodoo Blue, was last seen on the FJ Cruiser. Toyota says the resurrected Army Green “will bring out your inner drill sergeant.” Preferably not this drill sergeant.

Inside, a new driver’s instrument panel is more handsome and informative, including a chrono-style speedometer and tach. Toyota has also managed to shoehorn in its 8-inch touchscreen infotainment system, which comes with Apple CarPlay, Android Auto or Alexa. The 4Runner previously had a tiny 6.1-inch touchscreen and none of those smartphone connectivity features. Should you choose a TRD Pro or Limited model, the new system adds a 15-speaker, 550-watt JBL audio unit. In another nod to modernity, back-seat riders get a new pair of USB ports that fans have been demanding (the old 4Runner had one). Proximity entry with push button start also becomes standard on nearly all models.

Mechanically, the TRD Pro adds a cat-back exhaust system with a slightly huskier growl. Though it’s questionable whether anyone really needs to hear the 4Runner’s ancient, 4.0-liter V6 groan its way to high revs. That V6 delivers an unchanged 270 horsepower and 278 pound-feet of torque. Toyota says it's good for a 0-60 mph run in a reasonable 7.5 seconds, which is a touch quicker than a burly Dodge Durango with its 293-hp V6. 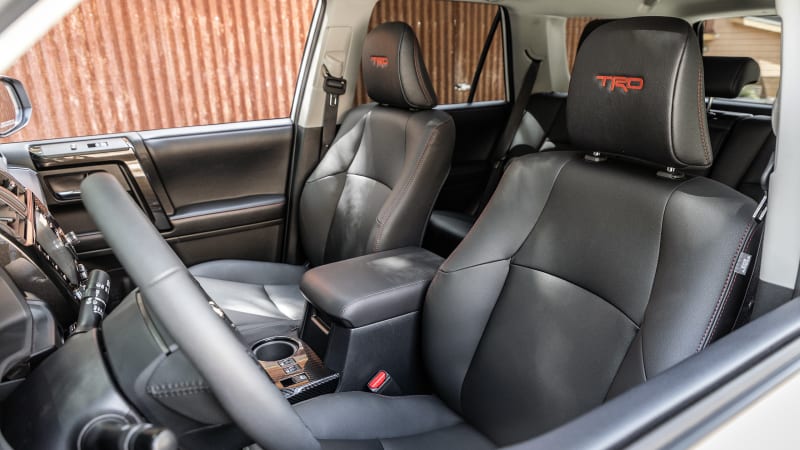 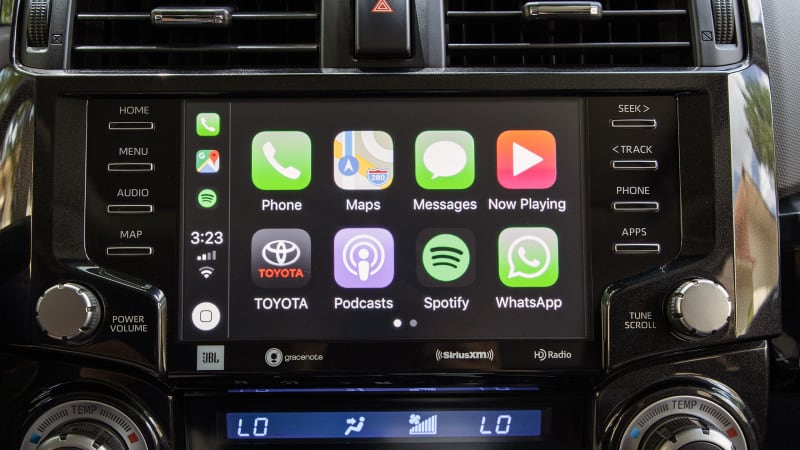 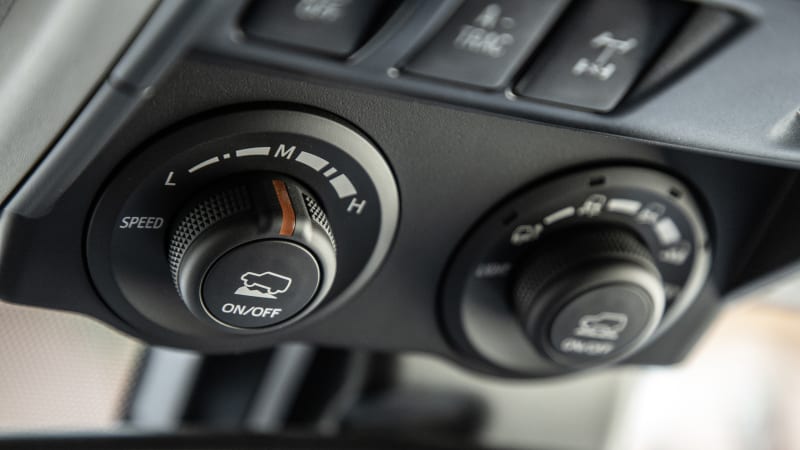 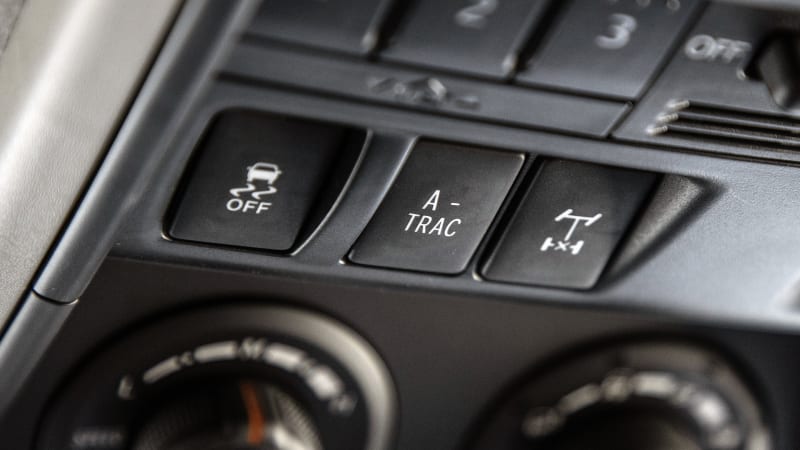 While the 4Runner remains roomy and relatively comfortable, it's looking as tired your grandpa’s Barcalounger. Inside, plastic imitates seemingly every conceivable natural material: There’s plastic that looks like leather, plastic as rubber, plastic as metal or carbon fiber. Fold the seats, including the optional, child-sized third row (only on SR5 and Limited models), and the 4Runner can swallow an expedition’s worth of gear. Its maximum capacity of 90 cubic feet is actually comparable to three-row midsize crossovers, although it does have a higher liftover.

As noted, nothing announces the 4Runner’s authenticity like the manly-man transfer case once found on every four-wheeler. (You might crawl beneath the TRD Pro version to spot its 2.5-inch-diameter Fox shocks, or its expanded skidplates, but that would take more effort). Today, even most Jeeps (or the 2020 Toyota Tacoma pickup we tested at Moab) have replaced manual transfer cases with electronic knobs or switches, which are easier to operate but not nearly as tactile and cool. Toyota's Multi-Terrain Select system and Crawl Control are still operated with knobs, though they're oddly located on the ceiling forward of the rearview mirror.

With all the above off-roading weapons loaded, the 4Runner proves to still have the Right Stuff, from the Flintstones-like landscapes of Moab, which instantly expose any SUV poseur, to hours on dirt roads through the high passes of the LaSal and San Juan ranges toward Ouray, Colorado. And it wouldn’t be a Toyota review without a fond mention of the 4Runner’s reputation for bulletproof reliability: It’s something that could save your relationship, or your bacon, on lonely trails and in the wilderness. 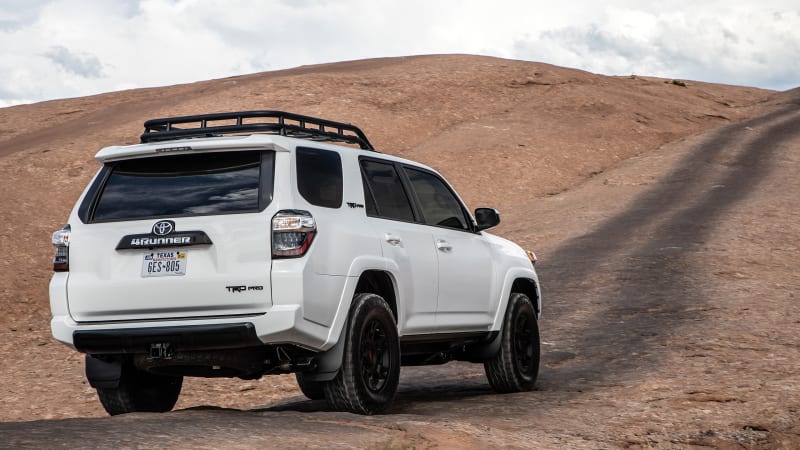 Realizing that we’ve spent most of the past two days on boulders, sand and dirt-roostertail roads, I take a pre-dinner solo run from Ouray on actual pavement. On these everyday roads, there’s just no getting around the 4Runner’s antiquated state: The placeholder powertrain, the sloppy and disconnected steering, the way the 4Runner wanders in its lane. It’s here that 4x4 fans may do a facepalm, and say something like, “C’mon! It’s an off-road truck. What did you expect, a Bentley?”

Sure, the Toyota’s off-road chops help explain its on-road shortcomings, but no longer excuses them here in 2020. For proof, look no further than the latest Jeep Wrangler, the (also aging) Grand Cherokee, or at higher price points, any Land Rover or the Mercedes G-Class. That Wrangler JL’s all-new (cough, cough) design has proven that even a hardcore off-roader can achieve a respectable level of civility. While the current 4Runner is more livable than the Wrangler, considering how far that Jeep has come, couldn’t Toyota do better?

Toyota hasn’t divulged pricing for the 2020 4Runner that goes on sale this fall, but cost increases should be negligible. For reference, a rear-drive, 2019 SR model starts from $36,405, while the TRD Pro goes for $47,910. Analysts’ crystal balls do see Toyota bringing an all-new 4Runner to showrooms, finally, around 2022. It seems likely that the 4Runner can withstand market pressures until that sixth-generation model arrives, especially with its antiquated infotainment and missing safety tech features being corrected for 2020. Its market niche is also showing surprising endurance, thanks in part to Americans' increasing demand for SUVs with authentic design and rugged personality. This old soldier actually sold nearly 100,000 more units in 2018 than it did when it was brand new in 2010.

Still, if you couldn’t care less about four-wheeling and have no idea what that other shifter does, you might wait for another SUV that’s also tripled its sales since 2009: The Toyota Highlander, whose all-new 2020 version goes on sale late this year. Choose that family favorite over the more purpose-built 4Runner, and Toyota won’t mind a bit. 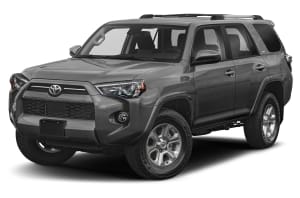 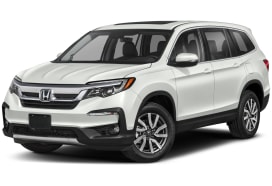 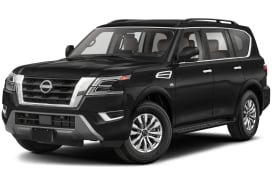