There's a ton of customization to the driving experience

GM has a few extra tricks to show off on the 2020 Chevy Corvette C8, and the car’s mode selector is one worth highlighting. Not only does it have a fantastic-looking dial on the center stack, but there’s also a new button on the steering wheel.

The silver switch marked with a Z activates (surprise!) “Z mode.” If you’re familiar with BMW’s M switches on the steering wheel of M cars, this functions similarly to that. Chevy says it’ll put the car into a hybrid between Sport and Track mode, but the owner can customize the mode to make it exactly what they want it to be. One press of the button will load up your preset powertrain, steering, suspension, brake and exhaust modes. You can then select between a few options within each of those categories, including Tour, Sport and Track.

Another new custom mode is called “MyMode.” This one works a lot like Z mode, except it remains activated through key cycles. The only catch is that you can’t set a powertrain setting in MyMode, which means suspension, braking, steering and exhaust settings will remain intact. 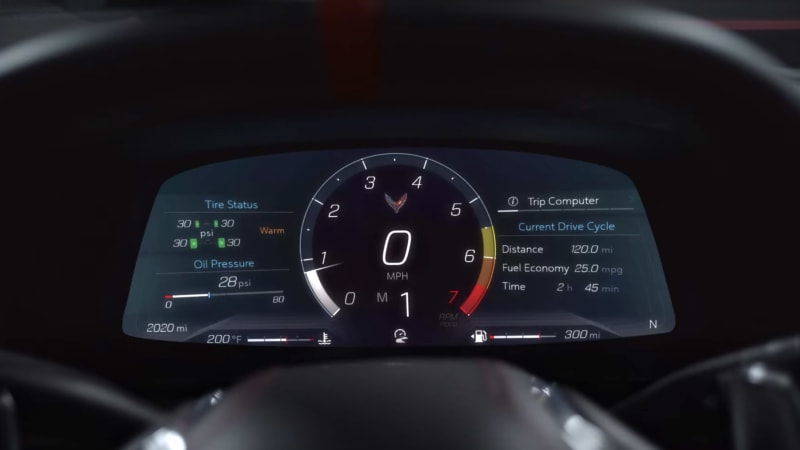 You’ll notice some big changes in the digital instrument cluster as you toggle through modes. The Tour mode offers up basic information you’ll want to see at a glance. There’s a super easy-to-read tachometer front and center with a digital speedometer right below it. As many cars do these days, Chevy gives you some warning as you approach redline with the yellow and orange transparent dashes leading up to the solid redline at 6,600 rpm. Useful information is splayed out to the left and right, including a tire temperature status notification. We can also see one screen of the car’s trip data. This particular C8 looks to have managed 25 mpg, which is the exact EPA highway rating for the 2019 C7 Corvette. Chevy hasn’t released mileage numbers for the C8, but we imagine there won’t be a major change from the C7. 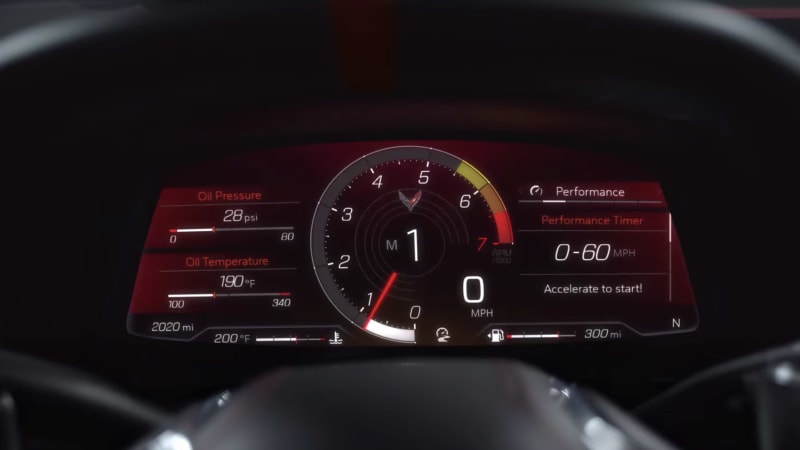 The Sport mode ratchets things up a notch by giving you a racy red background and tightening up the tachometer. It adds little dashes between the numbers and prioritizes gear position over the digital speedometer. Vital temperatures are also displayed off to the left, but we imagine both sides are scrollable with much more data. Chevy seems to be particularly excited about the in-dash performance data recording, adding an exclamation point to “Accelerate to start!” You’re darn right. 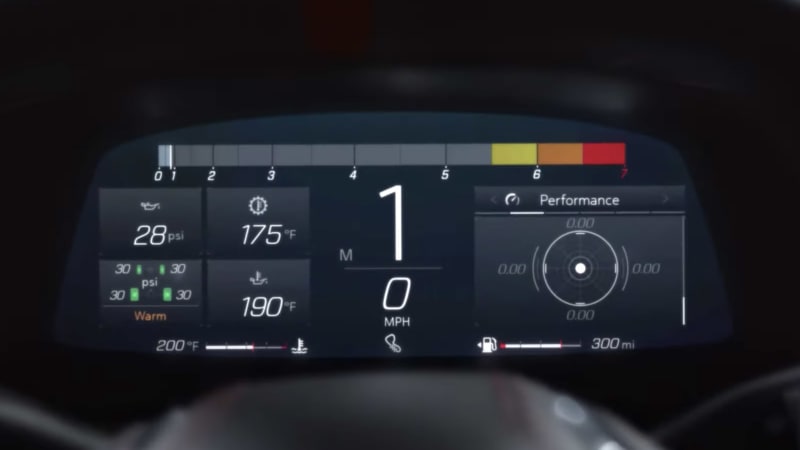 Chevy’s Track mode, with its horizontal tachometer, actually reminds us a bit of McLaren’s new minimal track display. This mode ditches any semblance of useful street data in exchange for a layout prioritizing gear position and your current position in the rev range. Maybe you’re old school and want the round tach, but this is what Chevy deems best for racing.

Without driving the car it’s difficult to determine if the displays and mode switching work how we’d like them to, but it’s safe to say everything looks rather attractive. Z mode sounds perfect for punching up the car’s performance on short notice if you hit a fun patch of road, but it could also work as your go-to button every time you hop in the car.

If you still haven’t caught up on everything C8 related, make sure to check out our reveal post with all the details. The convertible is worth your time to check out, as well.