How Trump's tariffs have tripped up the all-American RV industry 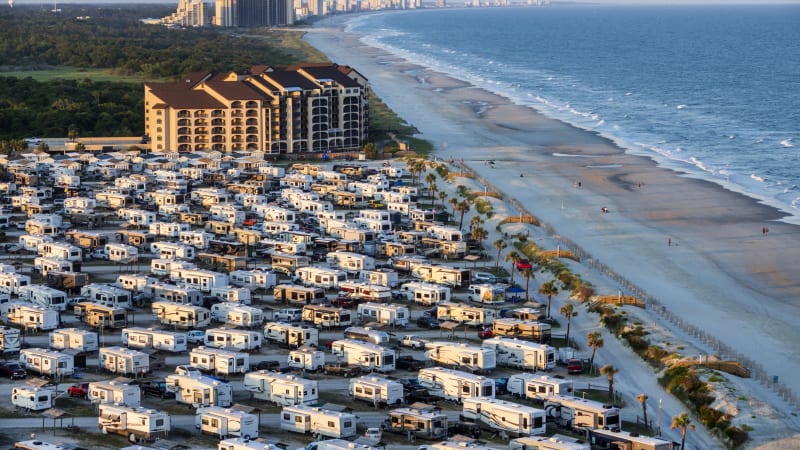 ELKHART, Ind. — Carrie Gray points to a stack of unwelcome mail on a conference table at the offices of Renegade RV, one of the leading U.S. manufacturers of high-end recreational vehicles. She’s buried in bad news from most of her about 350 suppliers.

“We got letters from 75 percent of them demanding tariff-related price increases,” explains Gray, Renegade’s materials manager.

About 85% of the recreational vehicles sold in the United States are built in and around Elkhart County, making it a popular stop for politicians to tout their visions for U.S. manufacturing – including President Donald Trump, who staged a rally here last May.

And yet this uniquely American manufacturing sector has been caught in the crossfire of Trump’s trade war, according to interviews with industry insiders and economists, along with data showing a steep sales decline amid rising costs and consumer prices. The industry has taken hits from U.S. tariffs on steel and aluminum and other duties on scores of Chinese-made RV parts, from plumbing fixtures to electronic components to vinyl seat covers.

Shipments of RVs to dealers have fallen 22% percent in the first five months of this year, compared to the same period last year, after slipping 4% in 2018, according to the Recreational Vehicle Industry Association.

The RV industry’s woes illustrate how even the most “American” of manufacturers, the kind of industries Trump has vowed to protect, can be heavily exposed to tariffs in a world of globalized supply chains.

Tariff-related price hikes have forced manufacturers to pass on some of the increased costs though higher RV prices, which in turn has contributed to slower sales. As dealers cut orders, many plants furloughed workers or reduced hours, including Renegade, which has reduced its headcount of 160 by about 10 workers since May at its two factories here.

Michael Hicks, a Ball State University economist who tracks the industry, said its decline is far worse than he or other analysts expected and could signal a wider economic downturn. RV shipments have fallen sharply just before the last three U.S. recessions.

“The RV industry is a great bellwether of the economy,” said Hicks, because the vehicles are an expensive and discretionary purchase, easily delayed by consumers who start to worry about their financial stability.

The Commerce Department said in a statement that it has “met with private industry” to hear concerns about steel and aluminum tariffs and that it has granted most U.S. companies' requests for tariff exemptions among the applications it has fully processed. The department referred questions about tariffs on Chinese goods to the office of the United States Trade Representative, which did not respond to requests for comment.

The RV industry may have contributed to its own problems by building too many factories during a sales boom in recent years, leading to an oversupply now. But tariffs were the pivotal factor in the industry's decline, said managers at RV manufacturers and suppliers.

“The tariff price increases are what tipped the RV business — it started the landslide, no question,” said Tom Bond, the materials and purchasing manager at Adnik Manufacturing, an Elkhart-based division of Norco Industries that has been hit with higher costs on metals it uses to make components such as seat frames.

Sitting in an office near the front of the Adnik factory, Bond and Ronald Dick, the company’s brand manager, spent an hour griping about the speed and scope of their materials costs increases. And yet, like many in this region that strongly supported Trump’s election, they often added the caveat that they support the larger goal of the tariffs to protect U.S. factories from unfair foreign competition.

“It’s good for our country in the long haul,” said Dick, “but it’s going to hurt.”

Thor Industries Inc — which controls nearly half the RV market — said its sales in North America fell about 23% in its fiscal third quarter, which ended in April, compared to a year ago. The company said in a release that it has cut production and shifted to four-day weeks at some North American plants.

Workers such as Demiris Jahmal Williams are bracing for bumpy times. He has worked for a division of Thor for the last seven years, often working as many hours as he wanted. But his hours were cut recently, and his factory's normal week-long shutdown in July was extended to three weeks.

The unemployment rate in Elkhart county has risen to 2.6%, up from a post-recession low of 2.1% last April. During the last recession, the jobless rate in Elkhart County soared to more than 19%.

Tim Sullivan, CEO of REV Group, Renegade's parent company, said U.S. suppliers have raised prices alongside their foreign counterparts because tariffs have sparked a rush of demand for U.S. parts.

“It’s been a total feeding frenzy,” he said.

Michael Happe, CEO of Winnebago Industries Inc, said he expects tariffs will add more than $10 million to the company's costs this fiscal year, ending in August.

The upshot, he said, is that most RV manufacturers have had to boost prices they charge dealers.

“Those make their way to the end customer," he said. 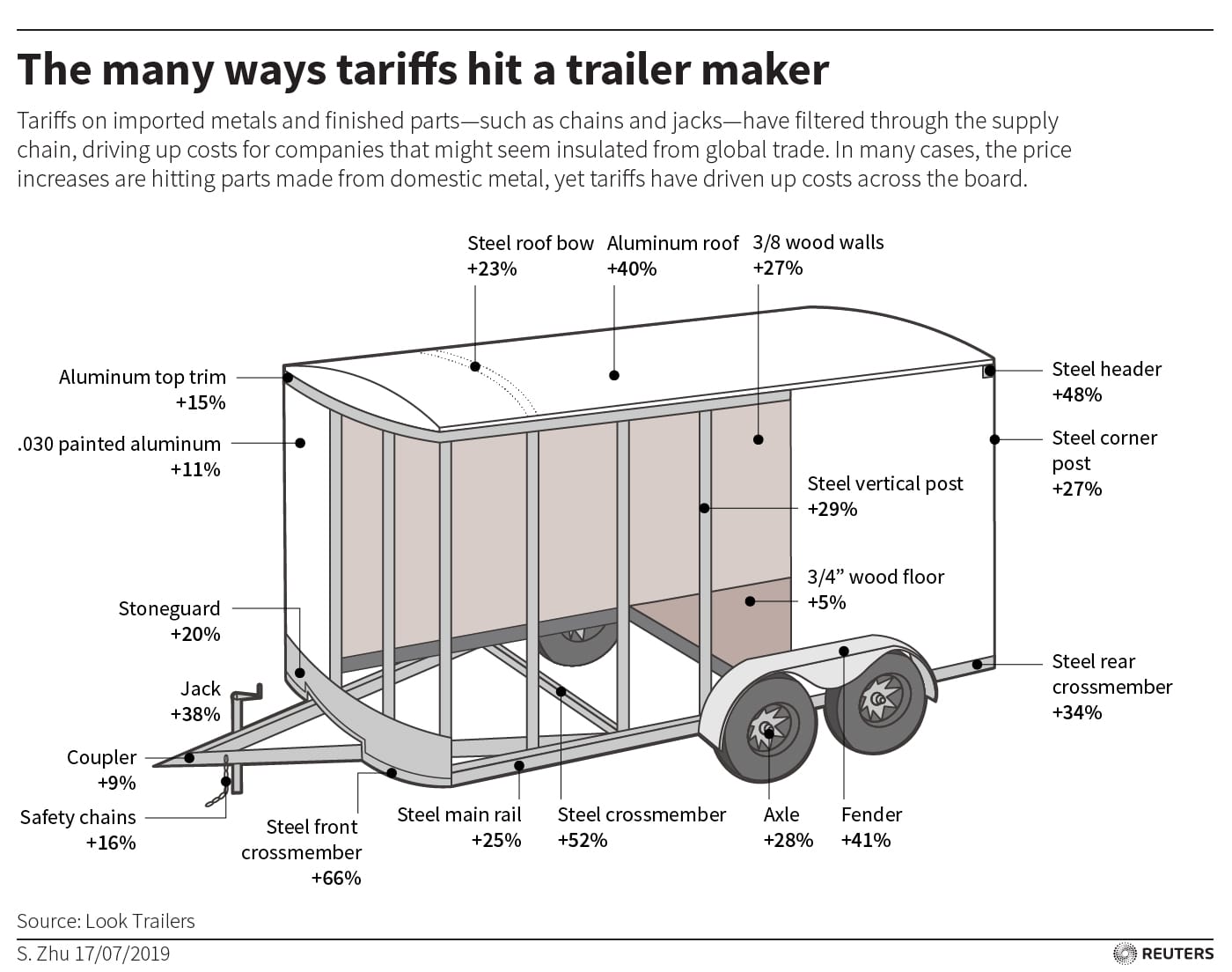 Despite its all-American image, the RV industry relies on imports for everything from air compressors and appliances to bedding fabrics and the LED light strings that have become a popular interior feature.

The cost of metals surged dramatically after sweeping tariffs on steel and aluminum were imposed last year. Those prices have since moderated, but manufacturers say many of the price increases on the metal parts they buy haven’t gone away.

Elkhart’s RV industry anchors a large network of related transport equipment companies, including utility trailer makers and specialty bus manufacturers, who rely on the same supply chains. Matt Arnold, president of utility trailer manufacturer Look Trailers based in Middlebury, Ind., said the axles he buys had three price hikes and are now 28% higher than before tariffs, while his Chinese tire rims were hit with a 65% tariff.

His rim supplier shifted to a source in Vietnam, but those still cost 8% more than he was paying before. In response, he boosted his trailer prices by about 20%, but that tanked sales. So far, he’s had to shutter his Georgia factory, laying off 80 people, and cut about 10% of his workforce in Indiana.

Tariffs have so far translated into a 5% increase in RV sticker prices for consumers, estimates Gregg Fore, chief revenue officer at trade magazine RV Business and the former owner of an RV parts supplier, based on anecdotal reports and proprietary sales data he has seen.

Many RVs cost far more. Renegade, for instance, sells models that cost as much as $750,000 and can come with multiple bathrooms, heated tile floors and cedar closets.

Some industry leaders say the business will stabilize once dealers reduce excess stocks. But many of the region’s leaders are worried, including Jackie Walorski, the Republican who represents the area in Congress.

Walorski is an outspoken critic of President Trump’s tariffs, although she steps lightly. In a statement, she praised the President’s tax cuts and other policies for helping fuel economic growth.

“At the same time, I have not been afraid to stand up for Hoosiers when tariffs and retaliatory measures have put those gains at risk,” she said, using a common nickname for Indiana residents. “As I’ve told the president, we need to put a stop to China’s unfair trade practices by using a scalpel, not an axe.”