Sure, it's expensive, but it's exceptionally well-executed

PORTLAND, Oregon – There was one crucial element missing at the launch of the 2020 Harley-Davidson LiveWire: the brain-rattling thump of V-twin engines. Virtually every other test ride in the brand’s 116-year history has been punctuated by the rumble of fuel-burning powerplants, but this time our two-wheeled armada glided through the city in near silence using nothing but electrons.

Electric motorcycles have been produced for years by startups like Alta Motors, Brammo, Energica, and Zero, to name a few. But the battery-powered LiveWire marks a dramatic departure from Harley-Davidson’s century-old formula of converting dead fossil fuels into relatively high amounts of sound (and little performance fury). How did the folks in Milwaukee tackle the growing EV market?

First, some vital stats. The LiveWire’s permanent magnet motor produces 105 horsepower and 86 lb-ft of torque from a 15.5 kWh lithium-ion battery, good for 0-60 mph in 3 seconds flat. Combined range is 98 miles according to the World Motorcycle Test standards; city range, based on the MIC scale, is 146 miles. Harley also claims that constant cruising at 70 mph can get you 70 miles before a recharge.

But the charging setup is, simply put, a paradox. The good news first: the LiveWire’s onboard DC fast-charging system can deliver 80% charge in 40 minutes, and a full charge in an hour, using a compatible DC fast-charging station. But if you’re not near a fast-charger, the onboard AC charger can only provide Level 1 charging. A full charge will take an excruciating 12.5 hours. 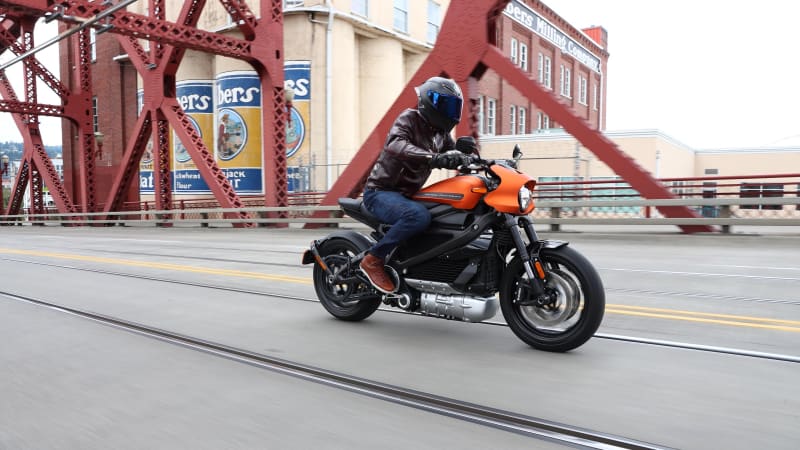 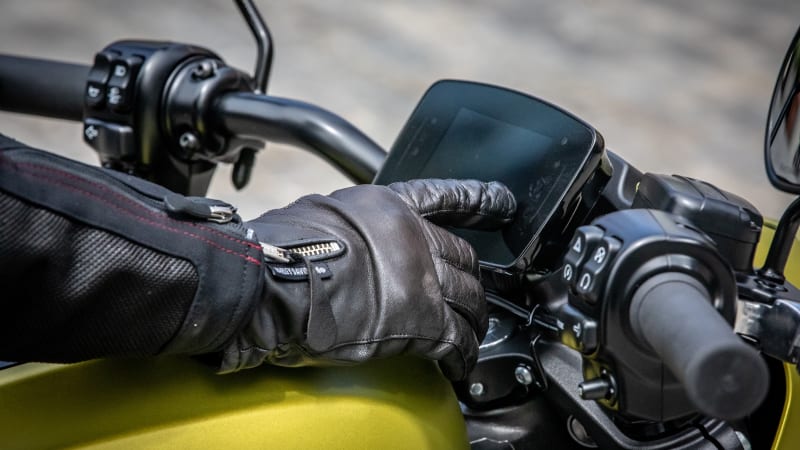 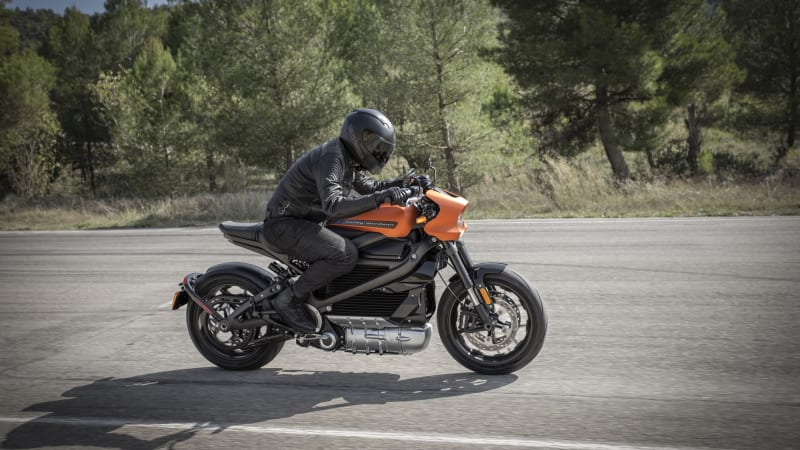 What gives? Chief engineer Glen Koval suggested that the company is counting on the growth of DC fast charging, as evidenced by their collaboration with Electrify America. He also cited the packaging complexity and thermal demands of combining DC fast charging with Level 2. Long rides will require planning ahead to make sure DC fast-chargers are on the route.

Power is routed to the rear wheel via a bevel gear primary drive (which produces a mild thrum), and a relatively quiet belt-driven final drive. And speaking of acoustics, the LiveWire emits its own signature sound, which CEO Matt Levitach likens to a “TIE Fighter from Star Wars.” Though the sound is subtle and more apparent to onlookers than the rider, it’s definitely there, dispatching a vaguely sci-fi and somewhat mechanical impression.

Interestingly, about halfway through the bike’s development Harley engineers felt it was missing a certain something. In an attempt to make the rider feel more connected to the bike they added a “haptic pulse,” which is essentially a slow beat emitted by the motor that’s perceptible only when the bike is at rest in propulsion mode (ie, when it’s “in gear”). The so-called heartbeat can be dialed up, down, or be completely eliminated by a software update at Harley dealerships.

The haptic feature was in its low setting on my test bike, and took a moment to notice when I was waiting at stoplights – one of several details that reveal the considerable level of thought that’s been put into LiveWire. But it still might take some time for traditionalists to acclimate. For example, there are no gears – the LiveWire uses a single-speed transmission, like most EVs – so there’s no clutch lever to grab with your left hand. Just like a scooter, you simply twist and go.

But unlike a step-through, the LiveWire truly scoots: pinned, the whoosh of acceleration builds up the faster you go: zooming from 60 to 80 mph requires only 1.9 seconds. Top speed, however, is electronically limited to 110 mph in consideration of ride, handling, and range according to a Harley rep. 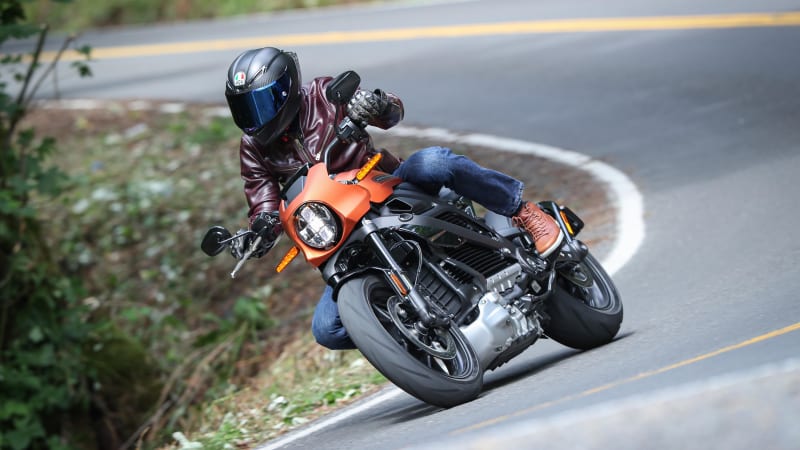 Four preset riding modes and three customizable settings can be selected via a hard button on the right handgrip. Though the presets include mild calibrations intended for wet conditions or range preservation, I primarily rode the LiveWire as I would any other motorcycle: in the most entertaining “Sport” and “Road” settings. In both modes the throttle response is intuitive, and immediate enough to produce satisfying thrust – it feels just right.

The chassis and suspension are similarly well-tuned, especially considering LiveWire’s hefty 549-lb curb weight, which puts it just under big internal combustion bikes like the Kawasaki ZX-14R (593 lbs) and the 1,340cc Suzuki Bandit 1250S (560 lbs). Thanks to a combination of favorable weight distribution and relatively low unsprung mass, the LiveWire’s heft felt well-masked on Cornelius Pass Road, a flowing one-lane ribbon that winds through the forested mountains just outside of downtown Portland.

You won’t confuse it with a flickable supermoto, but the LiveWire does manage to corner with more nimbleness than its spec sheet might suggest. Ease off the throttle and lean over at turn-in, and the LiveWire finds its line easily, exhibiting good stability while negotiating bends. Unlike most conventional internal combustion motorcycles, the LiveWire’s “engine” braking can be fine-tuned via the 4.3-inch TFT touchscreen for everything from a free-wheeling, zero drag effect to a setting so aggressive you hardly ever have to pull the brakes. Just like an EV car, this can completely change your corner entry and exit strategy. For instance, I prefer a high regen setting, which means I can adjust my entry speed by simply rolling off the throttle. It works wonders on twisty roads: just focus on modulating the throttle, and there’s virtually no need to bother with the brakes.

The bike responds well to mid-corner adjustments, with the bespoke Michelin Scorcher 180-mm rear and 120-mm front tires transmitting feedback nicely. Credit also goes to Showa’s high-end rear monoshock and Big Piston front fork, which are fully adjustable. Harley’s first-ever use of cornering enhanced ABS promises the dual-rotor 300-mm front brakes work optimally when the bike is leaned over, though I (thankfully) didn’t have to test emergency mid-corner stops despite the deer along our rural route. 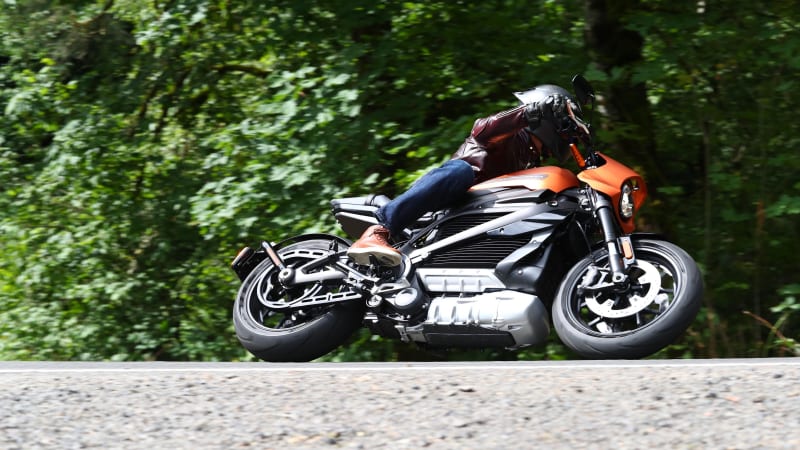 My brief jaunt through downtown Portland later in the day revealed user-friendly riding characteristics. Low-speed handling is surprisingly manageable despite the LiveWire’s bulk, and the brakes provide enough feedback to make it easy to produce smooth deceleration for stoplights. Urban hooligans will be disappointed to learn that the lack of a clutch makes it essentially impossible to do a wheelie, but smoky burnouts are easily achieved by disabling traction control and twisting away.

After a half-day of riding, Harley’s claimed mileage estimates appear to be spot-on based on my real-world experience. I started with a full charge, and after around 65 miles riding the trip computer indicated 41 miles remaining, despite aggressive riding and, yes, a burnout or two.

The LiveWire packs some surprise-and-delight elements in its industrially styled body, and it’s quick and agile despite being hefty. Overall, this is a well thought-out and diligently executed bike. The details are there, including a smartphone app that monitors the bike’s status, charge state, and service needs via available over-the-air software updates. A partnership with Electrify America will provide 500 kWh of free charging, as well as two years of free charging at ChargePoint stations via LiveWire dealers. 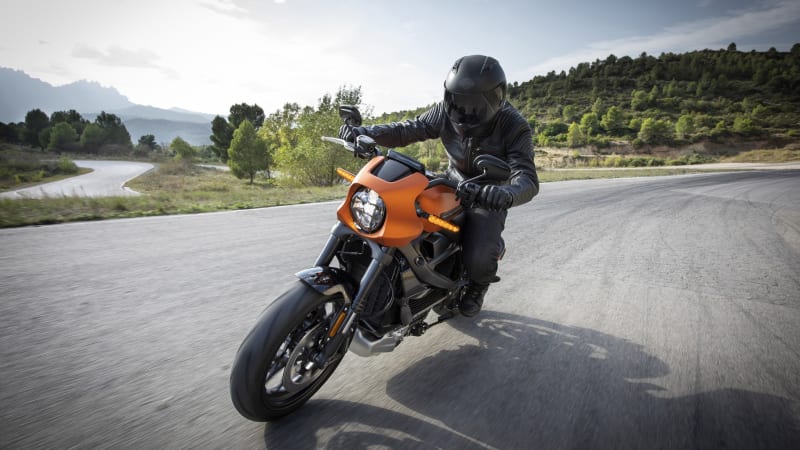 But there are also two glaring shortcomings with Harley’s first EV: the lack of Level 2 charging, and the considerable starting price of $29,799. Though impressive in its overall concept, the LiveWire’s specs fall short of some of its competitors, which include Zero Motorcycles’ SR/F, which produces 140 lb-ft of torque, weighs only 485 lbs, and offers a combined 123 miles of range. That model can also reach a 95% charge in 80 minutes with an optional 6 kW fast charger, which adds $2,300 to its $18,995 base price.

If you play the numbers game – and many EV buyers do – the LiveWire won’t make a whole lot of rational sense – its lack of Level 2 charging is a significant should give potential buyers pause, certainly. But don’t discount the value of the Harley-Davidson brand or the solidity and thoughtful detailing of the LiveWire, all of which come at a price that’s also typical of Harleys. More than anything, it’s an exceptionally well-executed motorcycle and an otherwise outstanding way to bring two-wheeled EVs into the mainstream.