View All Specs
Add a Review
REDMOND, Ore. – While diesel engines have continuously been a presence in heavy duty pickups for decades, their availability in half-ton models haS been limited and sporadic. It was only recently that Ram's EcoDiesel engine ignited substantial, prolonged interest among consumers who see value in their V8-matching capability and V6-beating fuel economy. Ford was the next to step up with its 3.0-liter PowerStroke V6, and now after its complete redesign last year, the 2020 Chevrolet Silverado 1500 counts GM's new Duramax diesel mill among a number of other updates.

Available as a $3,890 option on the Silverado 1500 LT, RST, LTZ and High Country models, the 3.0-liter turbodiesel inline-six produces 277 horsepower and 460 pound-feet of torque, of which 95% is achieved at just 1,250 rpm. That peak torque is also sustained from 1,500 to 3,000 rpm, and thanks to its standard 10-speed automatic transmission, there are more gears available to make sure the engine remains in that stump-pulling sweet spot.

While its rival diesel engines are produced by different manufacturers ( FCA's VM Motori produces Ram's EcoDiesel in Italy; Ford's PowerStroke is built in England and based on an engine also used by Jaguar-Land Rover), the new Duramax was engineered by General Motors and is built at its engine plant in Flint, Mich. It also differs by eschewing a V6 in favor of inline architecture, which is generally considered beneficial for smoothness and can also aid efficiency due to reduced friction. Having a cast aluminum block instead of its rivals' compacted graphite iron blocks saves considerable weight, though the cylinders themselves are still lined in iron to insure durability, according to GM. 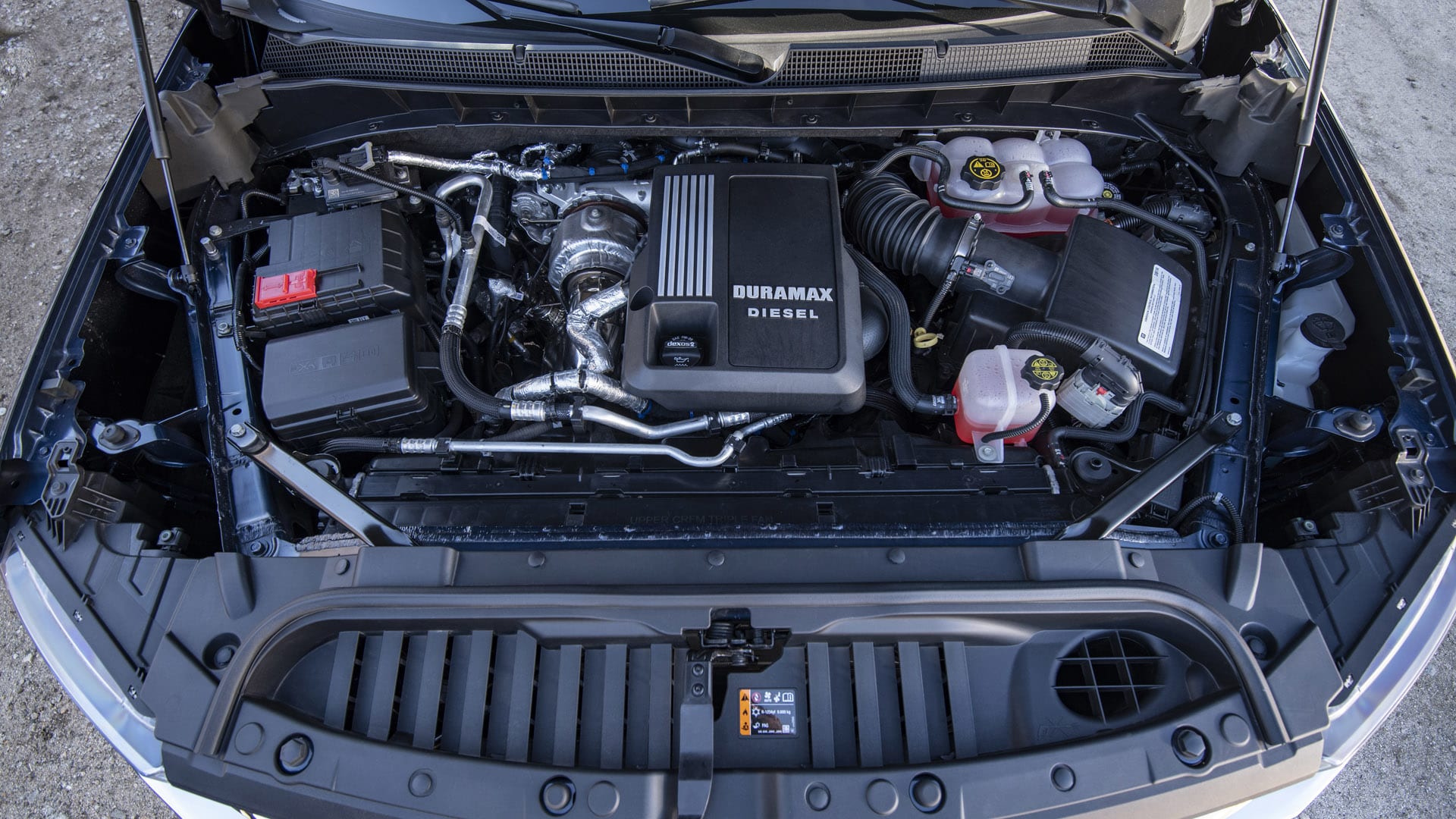 In terms of actual output, the Duramax bests its rivals' horsepower – 17 more than the recently announced 2020 Ram 1500 EcoDiesel (which we have yet to drive), and 27 more than the Ford Powerstroke. The Ram may have more torque – 480 pound-feet – but its peak is achieved at a higher 1,600 rpm. The PowerStroke, meanwhile, is the least torquey of the bunch, with 440 pound-feet at 1,750 rpm.

That torque advantage doesn't translate into a higher towing capacity – the Silverado Duramax's 9,300-pound rating falls well short of the F-150's 11,400-pound rating and the 2020 Ram's 12,560 rating. By contrast, the Ford and Ram diesels are comparable to their respective gasoline-powered maxes.

But there are two considerations that mitigate this on-paper disadvantage. For one, the Silverado's torque advantage should mean an easier driving experience when hitched up. The second is that 9,300 lbs is a lot, and if you're going to be routinely maxing out your half-ton truck's towing capacity then perhaps a heavy-duty offering would be a better call. For what it's worth, Chevy says its lower rating is because it optimized the truck for superior fuel economy rather than maximum capacity.

So what is its fuel economy, then? Actually, there is still no official estimate and GM wouldn't provide a ballpark beyond a graph showing that it got better highway fuel economy than the Ford PowerStroke in the company's internal testing at steady state speeds. We have no idea how much that will correspond to the Ford's official EPA estimate of 22 mpg city, 30 mpg highway and 25 mpg combined. This is frustrating. (For reference, the outgoing EcoDiesel Ram 2WD is good for 20 city and 27 highway, according to the EPA, though numbers for the new version haven't been released yet.) 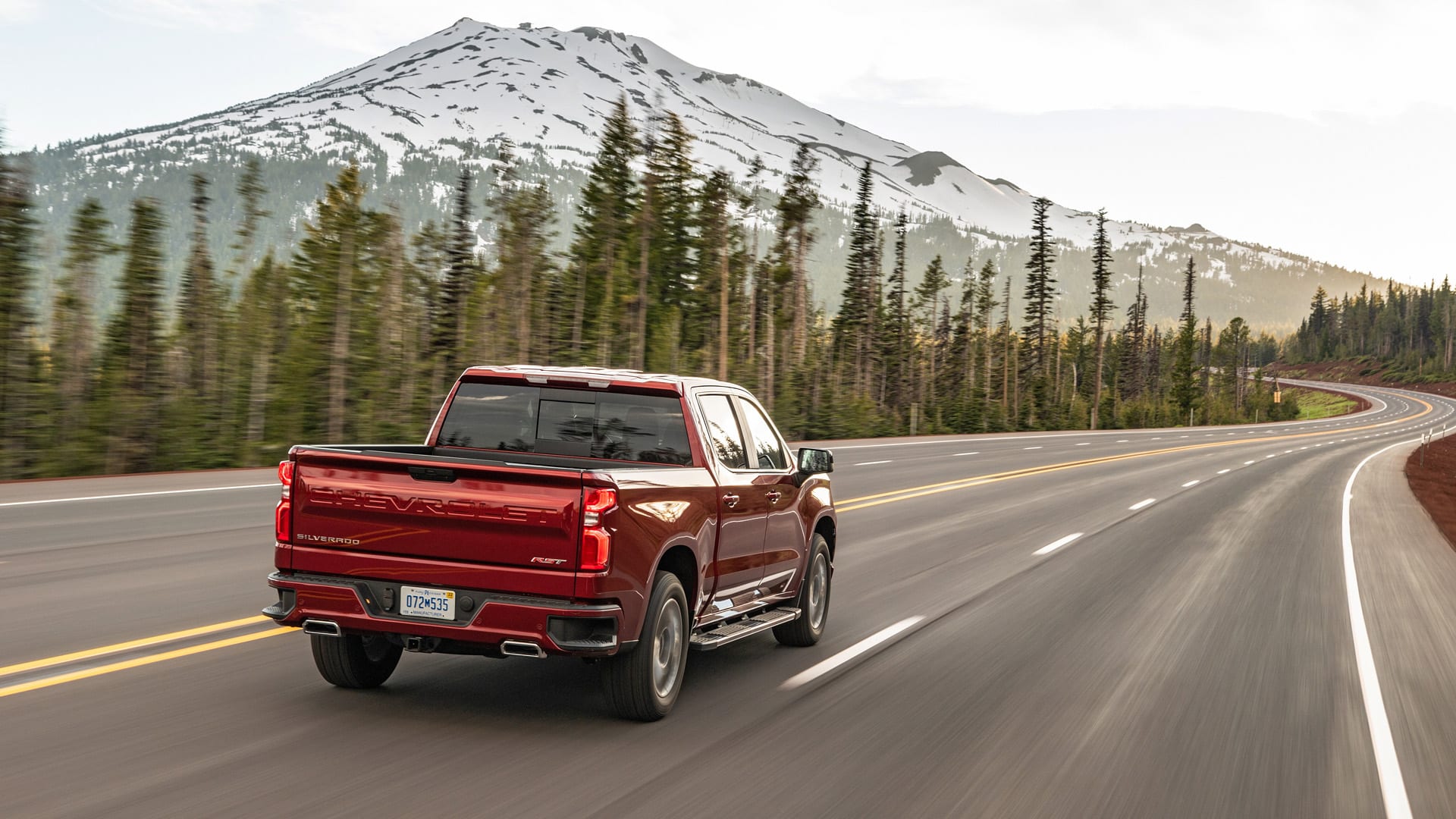 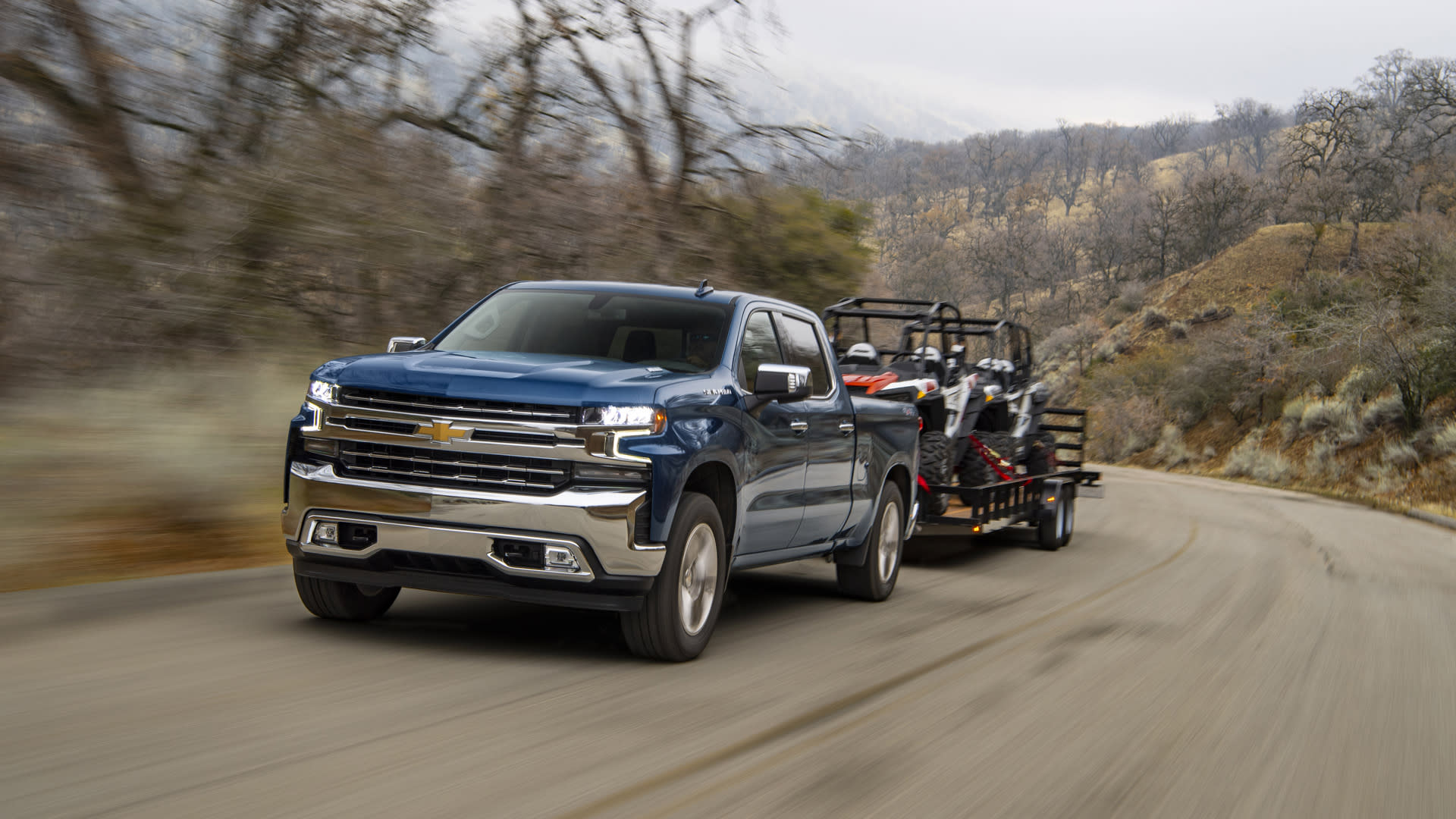 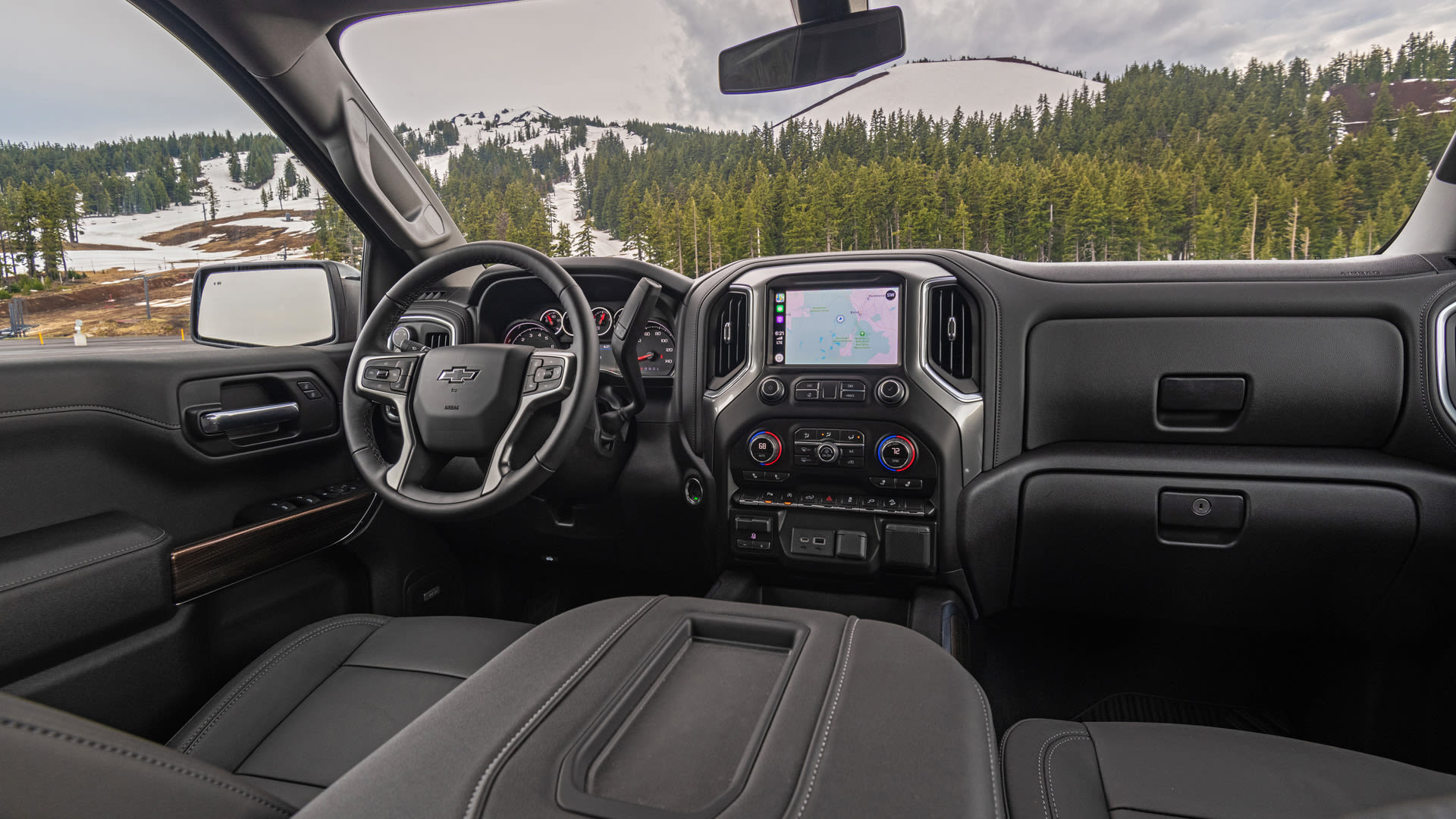 Therefore bereft of any helpful fuel economy data points, we accepted the otherwise useless challenge of achieving the best-possible fuel economy in the diesel-equipped Silverado 1500 of our choice during the first drive program outside Redmond, Ore. We selected the best-possible candidate: a lightly equipped RST with rear-wheel drive, an extended cab and a fuel-economy-aiding tonneau cover. Driving exclusively on rural highways with speed limits of 55 mph, we glued the speedometer to 50 mph and accelerated like we were driving to our own executions. The air-conditioning was on but set to 77 degrees. Turns were taken briskly. The end result after 31 miles was an average of 40.6 mpg. That was better than most other journalists could manage, so congratulations us. Engineers claim to have topped 47 mpg, but they're geeks.

Nevertheless, our experience makes it seem likely that the Duramax will be able to easily surpass 30 mpg on the highway, meaning it'll best all the Silverado's gas engine options: the 2.7 and 5.3 both top out at 23 mpg on the highway.That's potentially quite the difference.

Importantly, however, the Duramax impresses with its drivability. For starters, it is very quiet – more so in fact than that 2.7-liter. Much as we discovered with a PowerStroke-equipped F-150 King Ranch, the Silverado's Duramax doesn't have the big rig rumble of a heavy duty diesel – you'd have a hard time telling you're not packing a gas engine just from the sound as the inline-six is indeed impressively smooth. You'll definitely recognize it as a diesel under acceleration, though. When freed from fuel economy testing, it snaps you into your seat with its massive wall of torque. Given its ample horsepower figure, it can be seriously considered as a performance upgrade. We did not have that impression after driving the less lively F-150.

The 10-speed automatic also does its job of either keeping the engine in that torque-producing sweet-spot, or at its most efficient. Indeed, the tach pretty much lived at 1,100 rpm during both the fuel economy test and our regular, no-holds-barred drive. As such, consider the Duramax a far more appealing engine choice than the 2.7-liter (310 hp, 348 lb-ft), which underwhelmed during its time in our garage (but is, to its credit, $3,890 cheaper than the diesel). The diesel's torque output matches the much larger 6.2-liter V8 (420 hp), and will assuredly top its fuel economy by a significant amount, and carries the same premium of $2,495 over the 5.3-liter V8. So there's a strong argument to be made of the Duramax's impressively smooth, torque-rich power delivery and (Chevy's claimed) economy over any of the other engines in the lineup, unless absolute towing capacity is a necessity. And certainly the Duramax's tow rating is sufficient for most users.

That said, you would have to save $500 in fuel costs annually in order to pay back the Duramax's premium over the 5.3 within five years. Sounds reasonable, but here is where your local diesel prices come into play. In Oregon, gas and diesel prices are about even, so assuming the Duramax is at least as miserly as the F-150 PowerStroke, you could hit or beat that five year target. But if diesel is expensive, as it is in Texas right now, the payback period could stretch to around 10 years. Not that this is purely a Duramax problem; buyers have to consider the same payback math for the PowerStroke and EcoDiesel. Basically, the appeal of diesel in half-ton trucks really depends on where you live. GM's estimated 10-percent take rate for the Duramax would certainly speak to its far-from-universal potential.

However, your zip code has nothing to do with the Silverado itself, which as we've repeatedly reported, just doesn't stack up to the new 2019 Ram 1500 or updated 2019 Ford F-150. Even if we ultimately prefer the Duramax's performance to the PowerStroke's (we'll have to reserve judgement on the new 2020 Ram EcoDiesel), it's just not enough to counteract the Silverado's uncompetitive interior and questionable ride quality. The Duramax's inferior maximum towing capacity also can't be ignored. Now, there are additional updates for 2020, including the additional option of the Silverado HD's genuinely useful suite of 15 cameras and other trailering features (see gallery above). These can be a real difference maker for those who frequently tow, but altogether there's just not enough to overcome the 2020 Silverado's flaws. There's quite simply more to a truck's appeal these days than what's under the hood. 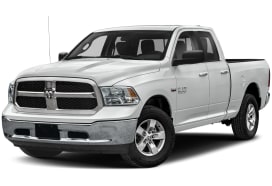 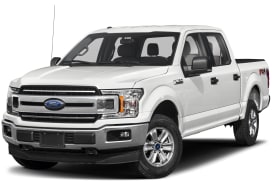 $1,645 - $1,645 Nat'l avg. savings off MSRP
See Local Pricing
I'm not in the market for a vehicle at this time. Please move this suggestion to the side for 30 days.
Huge Savings