I'm holding a Hot Wheels Lamborghini Miura in the palm of my hand, and the cool-to-the-touch metal toy feels identical to the Matchbox cars I spent endless hours playing with as a wee lad. But this time, the scaled-down conveyance packs tech I couldn't have dreamed of back in the day: an embedded NFC chip that acts as a digital VIN number, recording a lifetime scorecard of laps speeds, top scale speed, challenges won and distance traveled. This is not your father's Hot Wheels toy (and it certainly wasn't mine), but this techy Hot Wheels 'id' toy that debuted at Apple Stores today just might redefine the way children play with toy vehicles in the future.

"Kids are now learning to swipe before they wipe," Mattel Director of Product Management and Global Marketing Ron Friedman tells me in the "War Room" of the company's Southern California headquarters. More specifically, Friedman is referring to the so-called Alpha generation — children born after 2010, the year the iPad was launched. This particular subset of tykes slot after millennials, and are considered the first truly digitally native generation, born and raised in a fully saturated environment of tablets, smartphones and screens. In an attempt to understand how Alphas interact with this landscape, Mattel dove deep into research, conducting ethnographic studies on their play habits and leisure behavior. "Three years after the launch of the iPad, 21 percent of kids had access to a tablet. Fast forward five years from there and the number has climbed to 93 percent," Friedman says. This is the new playground, and they're spending more time on digital than off. This is the new normal."

So we're well aware that the kiddos have gone full digital, but what does that mean for how they play with cars? Recognizing the benefits of physical play and its link to cognitive and motor skill development (as opposed to vegging in front of a screen), Mattel integrated a digital element into their 50 year-old Hot Wheels platform while maintaining the same basic elements of their die-cast cars — dimensions, rolling wheels and the ability to play vroom vroom and pretend that miniature car is somehow full-sized. The digital fingerprint originates from the tiny chip in the car, but transforms gameplay by communicating with an app that's first being launched on iOS; hence, the 30-day Apple Store exclusive. Android, inevitably, will follow. You can pretend play with an id car all you want, roll it on countertops and drive your parents crazy the good old-fashioned way. But to accumulate mileage, tricks, and top speed specs– all of which are tracked with the id app–you'll need to play on a new Hot Wheels id Smart Track ($179), which uses a Race Portal ($39.99 if purchased separately) that's equipped with an NFC reader and 2 IR sensors which recognize each vehicle's unique digital signature and calculate its scale speed. The track comes with two unique vehicles and 16 interlocking track sections that link digital data via USB connectors. The resulting combinations can create up to 50 different configurations, each of which are detected by the app and can be mirrored in the digital environment. The app also acts as a digital garage that echoes the selection of cars at play in the real world. Future track components will become available in 2020, priced between $9.99 and $29.99 individually, and offering further variations on loops, jumps and straightaway sections. 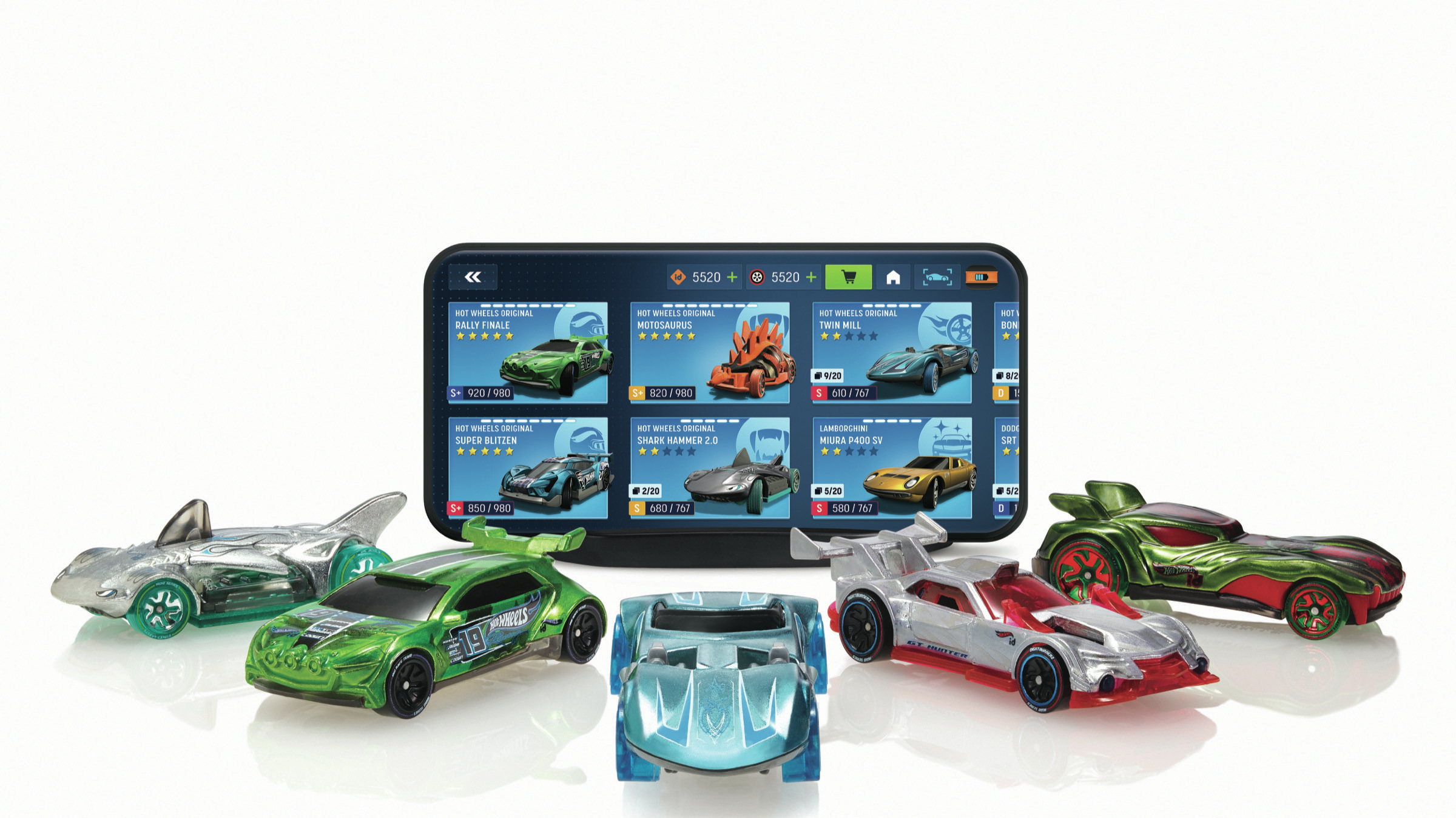 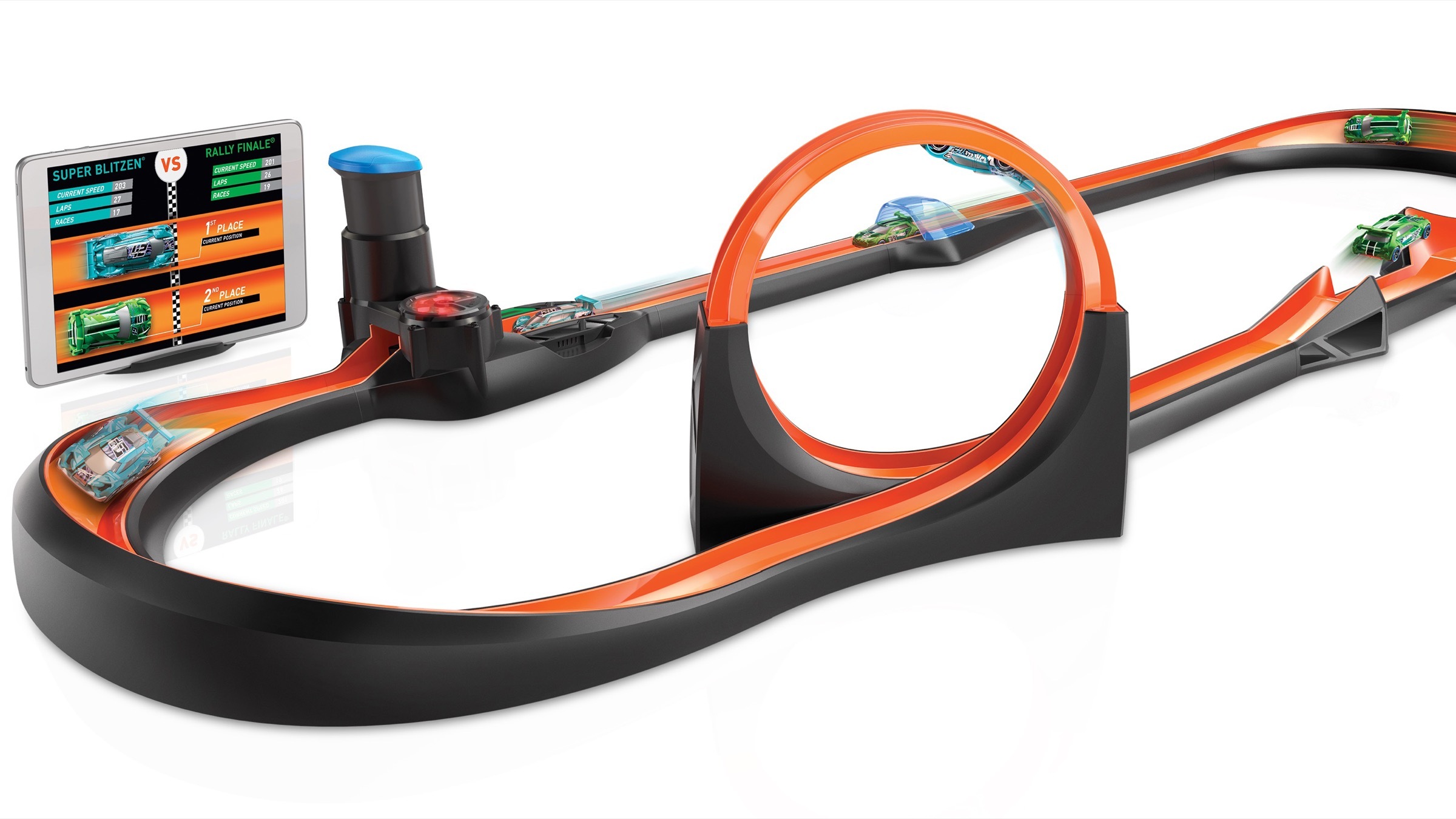 I spent some time fiddling with the Hot Wheels id system and found it to be a near 50/50 mashup of old school play style and new school gamer elements. There's a strong sense memory association for traditionalists like myself — the feel of the car in your hand, the freewheel spin of the axle, the metallic flake paint and the whimsical designs. Hot Wheels intends to offer 51 id vehicles this year and kicks off with eight, each priced at $6.99: relatable supercar/racecars including the Corvette C7R, SRT Viper GTS-R, Mercedes AMG-GT and Aston Martin One-77, as well as fictitious creations like Howlin Heat, Motosaurus, Shark Hammer 2.0, and Arachnorod.

But there's also a highly polished digital element that incorporates fast moving graphics, multilayered animations and engaging effects — many of the elements found in the latest tablet apps, though a tad less slick than big budget XBox, Playstation or Nintendo Switch games. Not surprisingly, the interface and graphics skew a bit young, though I will also admit to having a bit of fun while playing with the system. The software I tried with was still in Beta form, and had a couple glitches I was told would be resolved before the system went to market. That said, some of the more engaging aspects included a launch function, which measures top speed at the end of the track. The booster hardware, which accelerates cars using gear-driven wheels that are activated by pressing down on a button, is Hot Wheels' most powerful yet. It links to the app which displays its rpms. You can mindlessly propel and track up to six cars on the track by pumping the button, or engage in a challenge that dictates an rpm for you to match. Incidentally, the system relies entirely on the Race Portal for data to be tracked. That section of track runs on a 500 mA lithium polymer battery and can record up to eight hours of playtime until it needs to connect to the phone or tablet-based app in order to transfer the data. Nothing is stored locally in each vehicle — after all, what would you expect for seven bucks a car? — but the app uploads each vehicle's stats and history, and uploads it to the cloud where a permanent record is stored for each vehicle's unique VIN number.

By adding a semi-structured format to gameplay, the id system encourages more involvement and greater stakes for kids who, like so many of us who became lifelong car fanatics, got into the hobby at an early age. Though some traditionalists (like myself) might be initially disappointed to learn that the cars only accumulate their stats when played with on an appropriate id track, the system makes sense within this ecosystem of affordable, collectable cars. And while the $179 price of the track will undoubtedly be a deterrent to some, the buy-in could also be considered fair game for parents seeking to foster the next level of enthusiasm for their car-crazy kids. On top of that, prices can only fall after the gaming system has been on the market for some time.

When asked about the idea of messing with Hot Wheels' analog success, Friedman suggests the new system is simply capitalizing on the brand's car toys of yore without losing the basic principles behind the gameplay. "The idea here is that play patterns have worked for 50 years," he says. "We're just making it more modern for the 21st century."