The Ghost is taking cues from the Cullinan and Phantom The Rolls-Royce Ghost is going to be entering a new generation soon, and things are remaining largely the same. You'll be hard pressed to notice any significant, new design details through the camouflage on the exterior, but Rolls is coming in hot with new interior bits.

Technology from the Cullinan and Phantom appears to be on the table, as Rolls-Royce adapts to the modern world. We can see the digital dials in the instrument cluster that aren't lit up in this photo, in addition to the large infotainment display alongside. Comparing this setup to a Cullinan, it appears to be largely the same. And even though Rolls has covered much of the fancy trim on the center console, it's left some of the parts uncovered. The placement of the vents and other parts seen here echo the design of both the Cullinan and Phantom.

The new Rolls Royces have succeeded in adding great tech while also retaining that old world feel about them. It's no surprise to see the same thing happening with the Ghost. We expect this newest Rolls to be riding on a version of the " Architecture of Luxury" modular platform underpinning the new Phantom and Cullinan. Normally, automakers would want to switch up the exterior styling with the move to a new platform, but there's no reason for Rolls to ruin what's working here. We can clearly see a lack of change on the outside from these spy photos. New LED headlight tech will surely be on the ticket, but the rest of the car will retain classic Ghost styling. It's hard to find any problem with that logic, as the design is instantly recognizable, even under heavy camouflage wrappings. Nobody will mistake this for anything other than a Rolls-Royce, and that means the design team is doing something right.

This big car will undoubtedly take on the updated 6.75-liter twin-turbo V12 we saw in the Phantom — it makes 563 horsepower and 664 pound-feet of torque in that application. Just as we mentioned in the first spy shots we saw of the Ghost, there are rumors this car could get four-wheel steering. Electrification rumors continue to swirl, as well, pointing at a possible 48-volt system in this car and even more electrified powertrains down the road for Rolls-Royce. 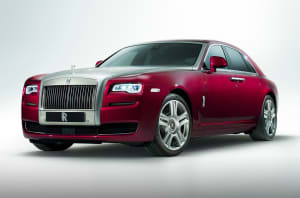