We test both the updated regular and GLC-Class Coupe models

FRANKFURT, Germany — The Mercedes-Benz GLC replaced the GLK in the all-important compact-crossover segment back in 2016, and the model has gone on to become the brand's bestseller in the United States. The GLC Coupe — really a four-door fastback, but the Germans will not be dissuaded from calling it a coupe — joined the lineup for 2017. Now the 2020 Mercedes-Benz GLC 300 and GLC 300 Coupe have been updated with a new turbocharged four-cylinder engine, additional off-road capability, the brand's latest infotainment interface, and design tweaks inside and out.

Taking the last first, the changes are fairly typical mid-cycle fare. The 2020 GLC-Class gets a reshaped grille with twin bars (GLC 300) or a single bar (GLC 300 Coupe), a restyled lower fascia, a reshaped rear bumper, LED headlights with a new light signature, and new wheel designs. In keeping with the times, both new paint colors are gray: Graphite Grey metallic and matte Selenite Grey Magno.

Inside, the changes are greater. The biggest is the arrival of Mercedes-Benz's MBUX user interface, which continues to spread throughout the lineup. The standard system operates via a wide, shallow 10.25-inch touchscreen that replaces the previous 7.0-inch standard unit or optional 8.4-inch screen, and now comes standard with Apple CarPlay and Android Auto (formerly a $350 option). It can display multiple functions at once, and also responds to Siri-style commands prefaced by, "Hey, Mercedes." Add the optional MBUX Interior Assistant, and the system can respond to gestures, although this is a dubious benefit. 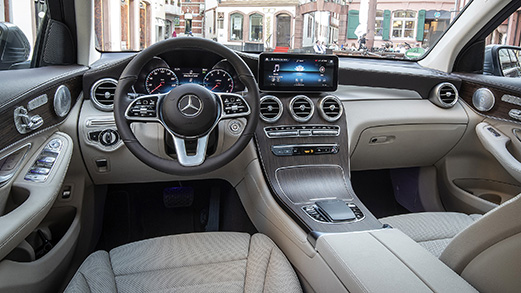 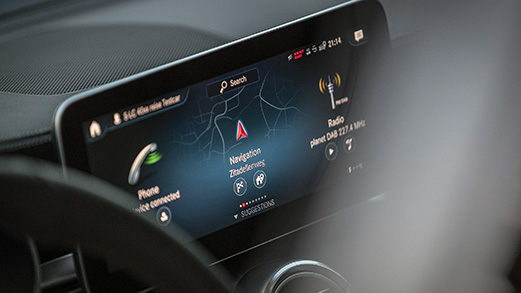 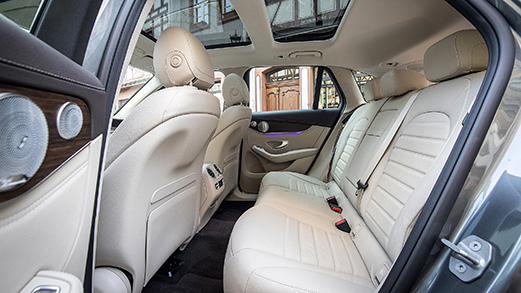 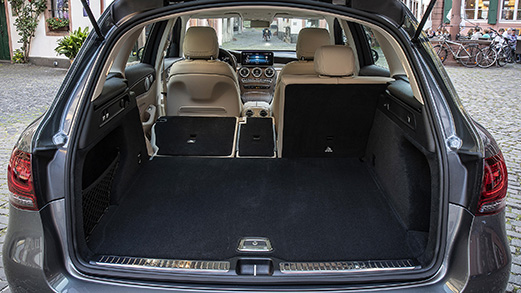 More impressive is the navigation system's neat new trick: When approaching a turn, the display automatically switches from a full-screen map to a split screen with a map in one-third and a feed from the forward camera on the other two-thirds. The camera view is overlaid with a directional arrow indicating where you need to turn. This new feature, the larger screen, and the greater configurability of the new system are all excellent. Now, while we do appreciate MBUX's larger and more tactile touchpad to the small glossy one it replaces, we do miss the old Comand clickwheel controller that operated with a mechanical precision no touchpad can match.

On the subject of screens, one also can order a 12.3-inch screen in place of a traditional instrument cluster. Elsewhere in the cabin, there's a new steering-wheel design that incorporates tiny touchpads on the left and right spokes under the driver's thumbs, which can be used for scrolling through the various readouts in the driver information screen or the infotainment system. There also are new trim and upholstery options, but the overall design remains much the same, which is to say among the richest-looking in the segment. Front-seat comfort is excellent, and the standard GLC 300's back seat is fine for two adults, or even three. The GLC 300 Coupe, however, sacrifices rear headroom — and a degree of cargo space — on the altar of questionable style.

Mechanically, the big change is a new standard engine. Codenamed M264, the new 2.0-liter turbocharged inline-four spins out 255 horsepower and 273 lb-ft of torque. It replaces the previous M274 engine, which made 241 horsepower and had the same torque output. As before, rear-wheel drive or 4Matic all-wheel drive are available, with 4Matic standard in the Coupe. The transmission is a nine-speed gearbox dubbed 9G-Tronic. 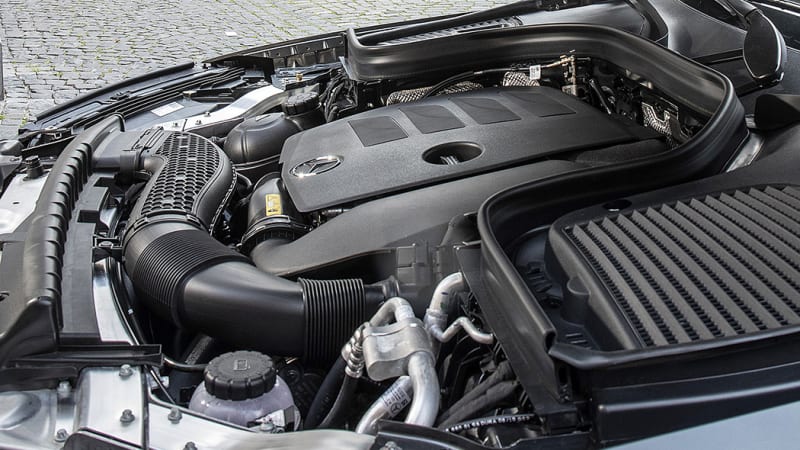 (The GLC350e plug-in-hybrid variant also will return next year, but Mercedes isn't yet ready to release details of its changes. The same is true of the AMG-branded GLC43, while the V8 monster GLC63 variants are discussed separately.)

Extra power is always welcome, but even with the extra juice, the GLC 300's powertrain still takes a half-second to gather itself before responding to a mashed throttle. At least the boost is fairly well integrated. The chassis tuning is more satisfying, marrying crisp, responsive cornering with decent ride quality in our sample car, which was equipped with the optional air-spring suspension (steel springs are standard). On the autobahn, the GLC's stability was welcome as was its notable quietness.

We also tackled a short off-road course, where the Euro-spec GLC was more at home than one might expect and more capable than its predecessor would have been. Credit some enhancements to the available Off-Road Engineering package, which is optional on the GLC 300 but not available on the Coupe. As configured for the European-market vehicle we drove, the package adds Offroad and Offroad+ modes to the Drive Select system's existing selections of Eco, Comfort, Sport, and Sport+. While the U.S. will get the Off-Road Engineering package's additional drive modes, we won't get the optional air suspension at all – all U.S. models will use fixed-ride-height steel spring suspension. 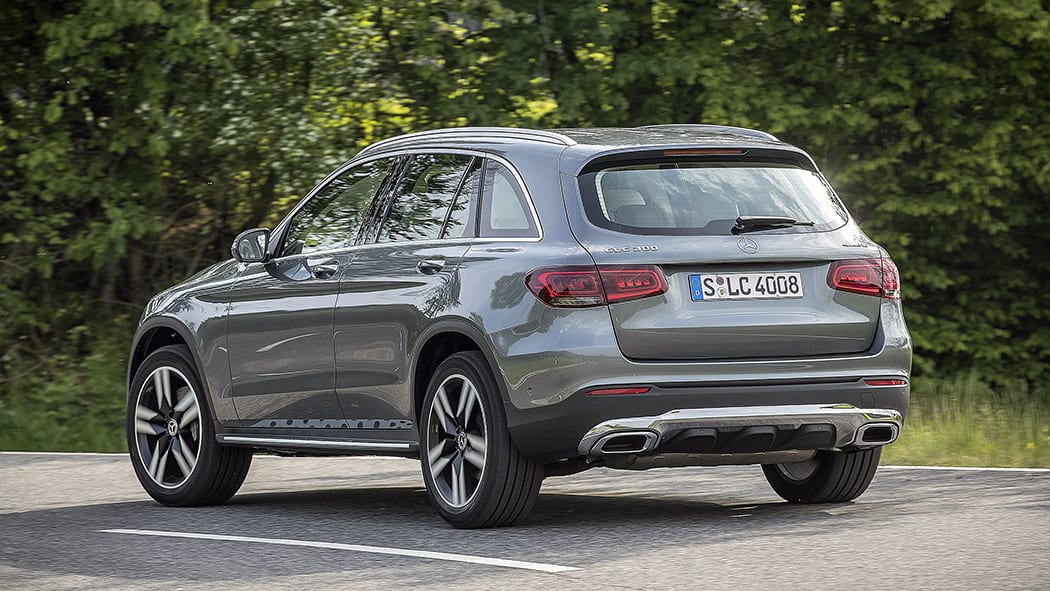 Both Offroad modes alter the accelerator mapping, the transmission programming, and the steering, as do the other drive modes. Offroad+ also automatically activates hill-descent control (Downhill Speed Regulation, or DSR, in Mercedes-speak) and sets it to 4 mph, although it can be adjusted to speeds of between 1 and 11 mph using the +/- cruise-control buttons on the steering wheel. Select Offroad+ and ride height increases by 0.6 inch. Hit the ride-height button on the center console when in Offroad+, and the suspension rises to its maximum of 2.0 inches above standard. (Hit the ride-height button without being in Offroad+ mode, and the vehicle rises 1.4 inches.) On stock summer tires, we climbed a 60% grade (still shy of the max of 70 degrees), walked down similarly steep slopes using the DSR, and clambered over trails with ruts so deep that one wheel was hanging in the air. None of which the average GLC owner is likely to do, but for the challenges the vehicle might realistically encounter — such as deep snow or muddy trails — there's now an extra margin of capability.

As before, the GLC comes standard with forward collision warning and automatic emergency braking, along with driver inattention warning. However, a multitude of extra and/or more advanced features are added with the Driver Assistance Package. These include lane-keeping assist, blind-spot warning, an enhanced forward collision system that can detect forward cross-traffic, and Mercedes' excellent Distronic adaptive cruise control system that provides steering assistance. For 2020, Mercedes has also added the new Active Lane Change Assist (signal a lane change with the cruise control engaged and the steering assist will execute it) and Route-Based Speed Adaption (cruise control will briefly reduce the set speed in order to more comfortably negotiate upcoming curves).

This article has been updated with new information from Mercedes indicating that U.S.-spec models will not get air suspension.