It looks more like its concept precursor than the Teramont X At last year's New York Auto Show, Volkswagen revealed the Atlas Cross Sport concept, a shortened, rakish two-row version of the Atlas crossover with the promise of production in 2019. We saw what seemed to be the realization of that crossover in the overseas-market Teramont X a couple months ago, but spy photos reveal that America's 2020 VW Atlas Cross Sport will be a little different. It also seems to be close to being revealed.

The prototype Cross Sport in the photos is clearly close to production since it has a bare-minimum vinyl wrap for camouflage and clearly finalized lighting. The overall shape is nearly identical to the Teramont X with everything from the rear doors forward looking like a normal Atlas. But from the rear doors back, we have a rear hatch that leans far forward like luxury crossover "coupes" and a very thick D-pillar. Closer inspection reveals that the front fascia of the Cross Sport looks more like the concept than the regular Atlas and Teramont X. The grille dips below the headlight line like the concept and the latest VW Jetta. The grille opening in the middle of the front bumper is much lower than the outboard ones, another nod to the concept. At the back, the taillights have been redesigned with LED bars like those on the current Golf, and at least this model lacks large exposed tailpipes like the Teramont X.

Since Volkswagen promised it would put this crossover into production this year, and we've seen one production version revealed along with this nearly ready prototype, we're probably just a few months away from seeing it revealed, with sales starting soon after. The Atlas Cross Sport will be entering a quickly filling segment against the Honda Passport, Chevy Blazer, Ford Edge, Hyundai Santa Fe and Nissan Murano. As with the competition, we expect the Atlas Cross Sport will be barely priced below the regular Atlas crossover's roughly $30,000 price tag. It will likely offer the same powertrain options as the regular Atlas including a turbocharged 2.0-liter four-cylinder and a naturally aspirated VR6 along with either front-wheel or all-wheel drive. 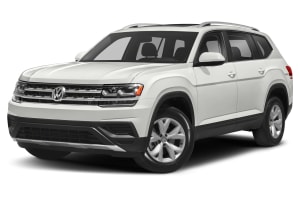