Almost a year ago Fiat Chrysler recalled roughly 1.6 million Ram trucks over an issue with the locking power tailgate. The actuator limiter tab for the power locking mechanism could fracture, which would permit the actuator's lock-rod control to move beyond its limits. That would pull the locking rods open, thereby allowing the tailgate to open at any time. The 2018 recall covered Ram 1500, 2500, and 3500 pickups from the 2015 to 2017 model years, with the five-foot-seven and six-foot-four beds and the power locking tailgate option. Trucks with eight-foot beds, and those with manual-locking tailgates, were excluded.

The trucks with eight-foot beds have been added to the recall as of earlier this month, putting 410,351 more trucks in the pool. According to Consumer Reports, Ram redesigned the locking assembly on the other two shorter bed sizes for trucks built after August 2, 2017, which was the end of the 2017 model year. But the eight-foot long-bed trucks didn't get the redesigned part until April 2, 2018 for some reason, making all eight-foot-bed pickups from the 2015 model year to April 1, 2018 part of the recall equation.

FCA says it's not aware of any accidents or injuries because of the issue. The company plans to notify owners on June 28. The paperwork filed with the National Highway Traffic Safety Administration doesn't advise owners to stop driving the trucks, but nor does it instruct owners on how to address the problem in the meantime. Sounds like bungee cords might be the go.

The fix is estimated to take 30 minutes at the dealer and entails removing the tailgate cover and installing a stop block to prevent the locking actuator's pivot arm from traveling too far. FCA says it will reimburse owners for any other repairs made to address the problem.

Ram's not alone on this field. The NHTSA continues to investigate the 2017 Ford Super Duty pickups for a similar issue. 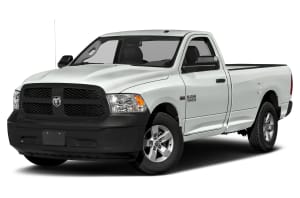