Honda e EV to get camera side mirrors for production

It's a Honda and compact-car first Swapping out side mirrors for cameras is slowly becoming popular in the automotive industry, and Honda is next to hop on board with a production car. Just announced today, Honda says the camera side mirrors in the Honda e prototype will be carried over to the production version of the compact electric hatchback. Similar to every other car that gets this "mirror technology," it will not be sold in the U.S.

Lexus was first to implement the tech on the ES sold in Japan, and Audi is next with its E-Tron electric crossover. Honda didn't provide good photos of the interior screens used to stream what the cameras feed it, but we imagine it'll look similar to the prototype interior we saw previously. The side pods on the doors look a lot like Honda LaneWatch on steroids, which is a technology we actually get here. That tech implements a camera into the passenger-side mirror and supplies a feed to the infotainment screen when you activate the right turn signal. 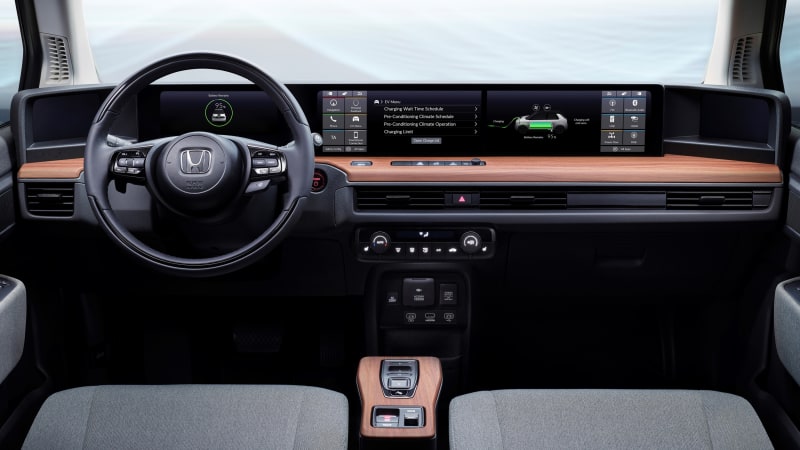 Honda says the cameras will feed their footage to two six-inch screens inside the cabin, integrated on either side of the dashboard. Benefits of using the cameras instead of big mirrors include a 90% reduction of aerodynamic drag, netting a 3.8% improvement to the car as a whole. They reduce wind noise significantly, and in this case, they don't extend the width of the car — Honda says they're no wider than the wheel arches.

There are a couple settings for the cameras. You can choose either "normal view" or "wide view." The wide view expands your field of vision by 50%, according to Honda. Guidelines appear on the screen when in reverse gear. Like other camera mirror systems, this one is shaped to resist accumulating water on the lens. A water-repellent coating also deters water from being a problem.

It's cool to see that Honda has the technology and is confident enough to put it in a production car, but we'll have to wait for U.S. regulations to catch up for this tech to be implemented here. For now, Europe will be enjoying it, and the concept-looking Honda e will be the first compact car in the world with it.