Honda UK and RHEL collaborated on the build

The Honda Civic Type R is an absolute joy to drive on-road, but this rally build looks mouthwateringly good from the limited photos available. Details are scant, but Honda reportedly collaborated with Ralph Hosier Engineering (RHEL) to build the car. Its name is the Honda Civic Type OveRland, and we're totally into it.

Apparently, Honda UK had a hand in this project, which isn't entirely surprising after seeing the other Type R builds they supported. Let us remind you of the Civic Type R pickup and the Type R wagon Honda UK built. This particular build uses the stock Type R powertrain, so it's still powered by the 2.0-liter turbocharged four-cylinder that makes 306 horsepower and 295 pound-feet of torque. However, the suspension has been lifted a massive four inches, and the track widened considerably. A new bodykit allows room for the big knobby tires sitting at all four corners — it also creates additional cooling vents, and these are actually functional.

Rally-style wheels, a roof scoop (with unspecified functionality) and some more vents round out the rest of the visual changes for this imposing rally car. What it doesn't have is all-wheel drive, but it should still be mighty fun on gravel with just the front wheels providing forward motion.

As of now there aren't many images to share, but we're hoping more present themselves soon. It almost goes without saying, but this is a concept and won't ever actually be produced by Honda. If you ask RHEL nicely enough, though, they might help you out. 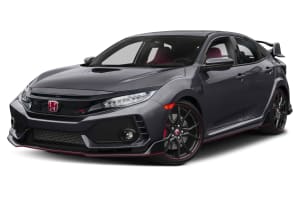