View All Specs
Add a Review
SARDINIA, Italy — As 21st-century Porsche 911s go, few hit peak analog quite so completely as the GT3 Touring. Free-breathing, naturally aspirated 4.0-liter flat-six? Check. Six-speed manual? Mandatory. In a world that's gone nearly completely paddle-shifted, turbocharged, and computerized, the wingless $146,350 coupe was a laser-focused answer to the nagging question enthusiasts couldn't stop asking. And on its heels, Porsche has — for the first time — dropped the top on a GT-based car: the 2019 911 Speedster.

But rather than employing the familiar Cabriolet nomenclature, the boys from Zuffenhausen have classified the new ragtop as a Speedster a la previous versions like the 356 (1954), G-Series (1989), 964 (1992), and 997 (2010). This time around, only 1,948 will be made — a sliver of people by big-car-company standards, but a rather optimistic figure considering its breathtaking asking price of $275,750.

There is, admittedly, a whole lot of goodness to the new Speedster's underpinnings. The 502-horsepower, 346-pound-feet powerplant paired with the lightweight, steel syncro-equipped six-speed is perhaps the last of its breed, as its naturally-aspirated flat-six with individual throttle bodies inherited from the 911 GT3 R race car. The GT3 models' high-spec suspension and drivetrain bits are also here, though the damping rates are slightly more forgiving and ride height increases by 5 millimeters. The carbon ceramic stoppers also have slightly softer compounds for easier modulation — all of which can be attributed to the Speedster's status as more of a pleasure-focused road car than a truly all-out racetrack special.

But don't let the milder-mannered bits fool you: Along Sardinia's winding country backroads, which are convincing impersonations of S-curves on technical race circuits, the Speedster feels like it's directly plugged into the driver's brain. The controls are relatively simple: a button-free steering wheel, a shortened shift lever, and a three-pedal setup that incorporates an auto-blip downshift option available through a button on the center console. Most spirited driving can be accomplished in the default mode, though pressing "ESC OFF" enables you to push the car harder through corners with more access to the power curve, with the stability control disabled for more slip-n-slide action while leaving traction control on.

Keep your foot planted on the right pedal, and there's a deep well of acceleration to draw from, one that keeps delivering thanks to the peak power at 8,400 rpm and a redline that arrives at 9,000 rpm. You'll likely want to spend the bulk of your time between 6,000 rpm and 9,000 rpm, though it's not quite as noisy as you might expect. That's largely due to the addition of a gas particulate filter that's required by new European regulations and manages to stifle some of the sweet screams of the GT3 engine. The sonic sacrifices extend to U.S.-market cars too, apparently, because stateside exhaust systems will have elements in place of the particulate filter to create equivalent amounts of back pressure. 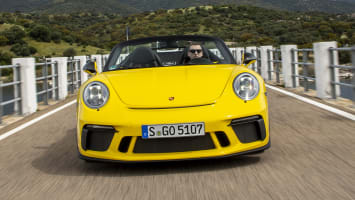 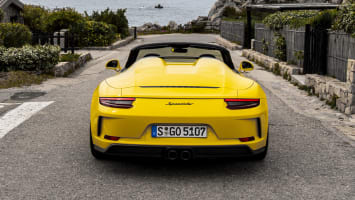 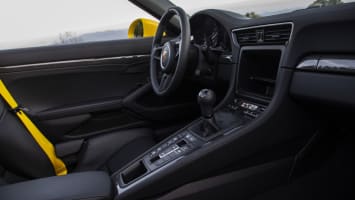 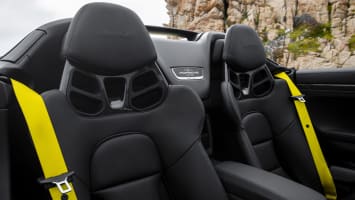 And while the deliciously crescendoing engine draws less attention to itself because it doesn't scream like the one in the coupe, the Speedster's suspension shines because of its surprise suppleness yet remarkable body control. Using the same springs but slightly softer dampers and taller ride height than the GT3 Touring coupe, the Speedster moves over the bumpy bits far more effectively, managing to smooth out irregularities enough to maintain excellent traction through rippled corners. The differentiator here is the feedback, and how the chassis communicates grip so clearly. The Speedster is agile with a remarkable amount of front-end grip for turn-in and displays a spunkiness that makes it seemingly beg to be tossed through corners. And when the road straightens out, the ride is smooth and controlled, getting just a bit stiffer if the firmer damping setting is selected via the button on the transmission tunnel.

There is also a tactile delight to shifting, with the six-speed sliding into gears with a smooth, positive click and an easily modulated slip of the clutch. And while it's temptingly easy to select the auto-blip function for rev-matched downshifts, heel-toe downshifts make for a far more satisfying experience, particularly since the throttle response is so transparent and intuitive. Shedding speed is also easy, with the carbon ceramic brakes offering less dramatic bite than the standard GT3 Touring due to a slightly softer pad compound.

Though it bears the same legendary name that has been associated with limited production ragtops, the new Speedster has been engineered with a significantly different mission statement in mind. Clad with carbon fiber panels and packed with a weapons grade drivetrain and suspension, the 3,230-pound roadster is a tight, lean open-air car with a manually folding roof that's entirely weatherproof and quiet enough for prolonged drives, unlike some earlier, less refined models. 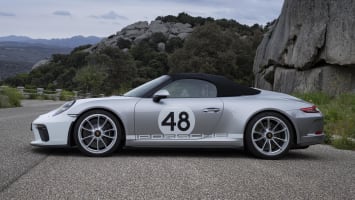 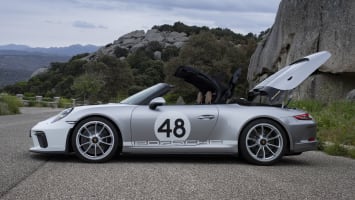 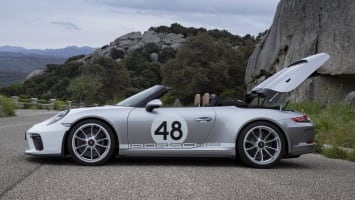 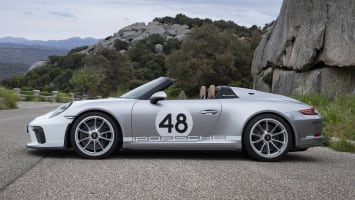 The new 911 Speedster offers a charismatic and polarizing personality that has already stirred serious debate among the Porsche community. While some debate the relative attractiveness of its downward sloping tonneau cover, more get fixated on the astronomic MSRP and the argument that production numbers aren't low enough to warrant the extra dollars. But as a pure driver, the new Speedster delights with a versatile chassis that's comfortable enough to drive every day, and the wonders of the naturally aspirated engine, which manages to dish out just the right amount of throttle response as it whirs its power through the six-speed gearbox.

Sure, we crave more mechanical sounds from the flat-six, but new regulations have made it harder than ever to extract engine wail from the exhaust pipes. That point aside — which is a big one, since sports cars at this price point are invariably all about visceral appeal — the 2019 Porsche 911 Speedster brings nearly every analog trick it can to the table to deliver a stirring drive. It's a compelling, though un-boisterous package, one that celebrates the union of open-air driving, loads of naturally aspirated power routed through a precisely calibrated three-pedal gearbox, and one of the finest suspension and chassis setups you're likely to find on a road car. Blink and you'll miss it.