VW is calling this its new flagship

The Arteon is a beautiful and spacious car, but it doesn't drive as well as other attractive, roomy cars in its class while costing much more.

According to Volkswagen, the new 2019 Arteon is the spiritual, not literal successor to the swoopy CC sedan. Another clue: the company will position the Arteon as the brand's flagship vehicle, rather than one of their strong-selling SUVs or crossovers. One VW rep said sales would be closer to the outgoing, niche Beetle than the volume-selling Tiguan or Atlas. Is the Wolfsburg brand crazy to emphasize the dwindling sedan market as most carmakers flee it? Listen up as we unravel the mystery of the 2019 Volkswagen Arteon.

When you look at the Arteon's underpinnings, VW's desire to separate it from the CC (or at least keep it at arm's length) starts to make more sense. While the CC was essentially a Passat with a lower roofline and snugger cabin, the Arteon rides on the more advanced MQB platform. The chassis gets five more inches of wheelbase, 2.9 more inches of rear legroom, and nearly double the cargo capacity. Here's another clue to the sleek four-door's place in the VW universe: Arteon's name derives from the Latin artem, which means "art." The wordplay suggests more of a design showcase than an appliance, a conveyance intended to make a statement and stand out. And stand out it does: from the Arteon's grille strakes that cleverly integrate into the LED headlamps to its uninterrupted character lines and elegantly tapered haunches, the attractive fastback manages to defy its relatively reasonable starting price of $36,840. This is not your father's Passat; The Arteon is a serious looker. 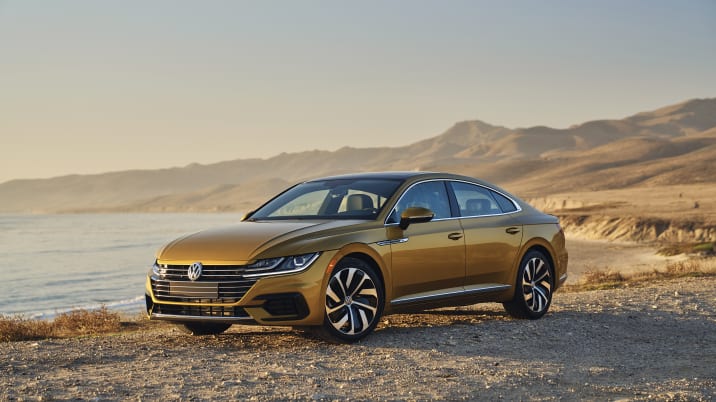 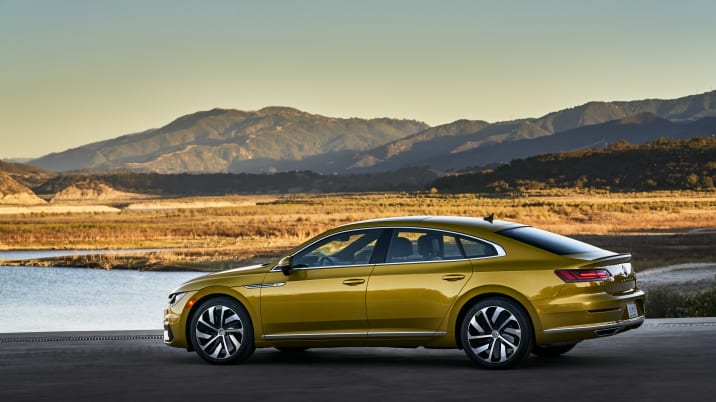 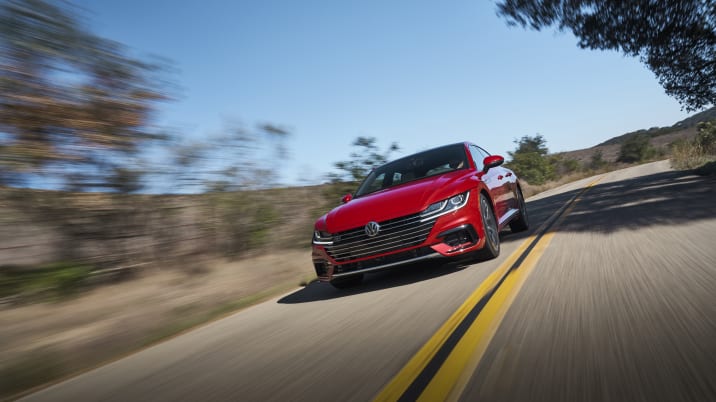 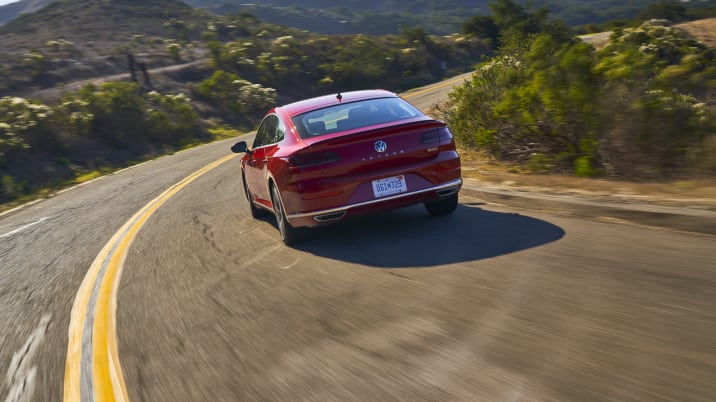 But despite its lavish styling, some of the CC's devil-may-care elements have been lost on the Arteon. Gone, for instance, is the gutsy optional VR6 motor, replaced with only one option: a humble, 2.0-liter inline-4. Essentially a detuned Golf R mill, the turbocharged powerplant produces 268 horsepower and 258 pound-feet of torque, mated to an eight-speed torque converter-equipped transmission that steps in for the predecessor's dual-clutch DSG unit. The combo yields a combined 25 mpg in front-drive form, or 23 mpg in all-wheel drive. Though the powerplant still eclipses the modest 174 horsepower engine found in the Passat, some will miss the option of a meatier engine.

Entry-level Arteon SE models are available in front-drive ($36,840) or all-wheel drive ($38,640) configurations and get standard heated 12-way adjustable leatherette seats, keyless entry, and 18-inch wheel, stuff you won't get on the $26,190 starter Passat. The SEL models we sampled start at $40,990 (front-drive) or $42,790 (all-wheel drive), and step up with features like Nappa leather seats, a panoramic roof, remote start, an eight-inch multimedia screen and adaptive cruise control. All SEL Premiums get all-wheel drive and top out at $45,940, bringing niceties like a massaging driver seat, a 700-watt Dynaudio sound system, a power operated trunk and an overhead view backup camera. 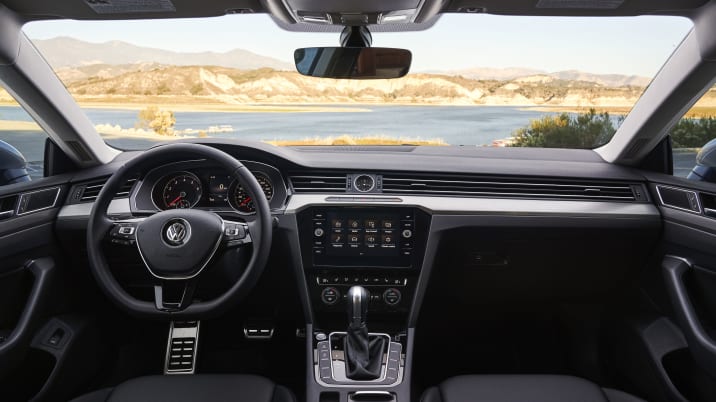 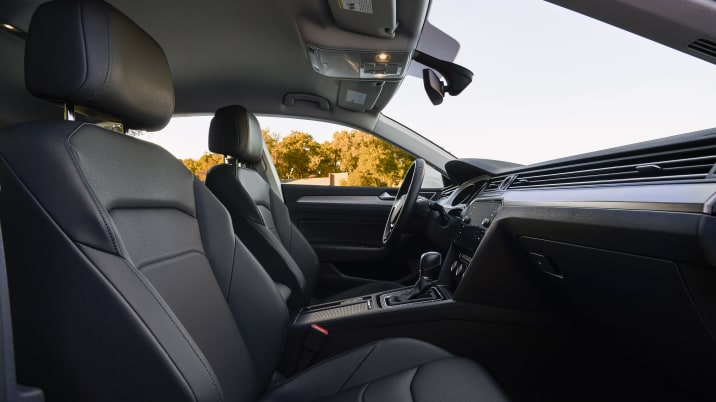 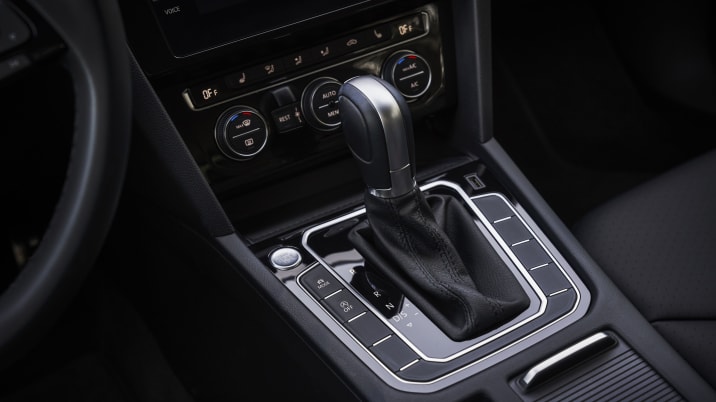 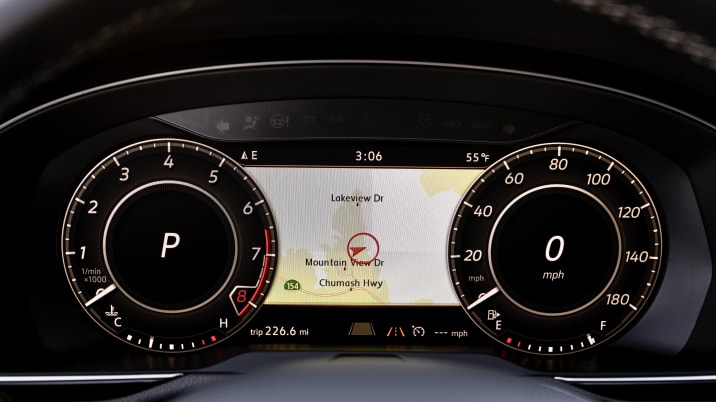 Minimalists will dig the Arteon's clean lines and frameless doors, though the theme that carries into the cabin might be a bit too sparse for some. The Arteon lacks some of the personality of competitors like the Acura TLX, Infiniti Q50, and Kia Stinger. Regardless, there's an honest straightforwardness to the cabin that's still worth something (and easily identifiable with VW), especially considering the proliferation of gimmicky, over-styled interiors. Also noteworthy is the spaciousness of the rear quarters: seated in the back, my 5'11" frame had a surprising amount of space ahead and above me, far more than in the CC.

Arteon sticks with VW's familiar mechanical shifter, only offering paddles with the R-Line trim on the top model or the R-Line package, which adds special trim, a spoiler, and 19- or 20-inch wheels for an extra $1,265 or $1,765, respectively. The DCC adaptive damping system that's standard on all models adjusts in modes including Eco, Normal, or Sport, though it can also be calibrated using an 18-setting slider. Annoyingly, the car must be stationary to adjust the suspension in custom mode, which also allows you to designate settings for steering, throttle response, and a few other parameters.

Tuned tighter than Passat, the Arteon's suspension and 19-inch wheels tends to pick up small road irregularities more than the next sedan, even when driven in its softest setting. While the busyness is particularly noticeable on low quality roads, the tune is welcome on stretches like California's serpentine Highway 33, where we pitched the Arteon through a stomach-churning sequence of apexes. The four-door was able to hang rather respectably, despite its large proportions and lengthy wheelbase. While the Arteon reveals its heft closer to the limit, we suspect our drive would have been even sportier without the all-wheel drive 4Motion option, as it adds 199 pounds to the front-drive model's 3,655-lb curb weight.

Of the array of test vehicles available at the drive event, only one was equipped with the 20-inch setup (also swathed in mild, all-season Continental ProContact rubber). The steering felt more precise with the 20-inch wheels, offering more chassis engagement and feel over the capable but somewhat numb 19-inch arrangement. And while the 2.0-liter turbo engine offers enough power to go as fast as we felt prudent on public roads, we do wonder how a more powerful engine might add to the Arteon's overall demeanor. 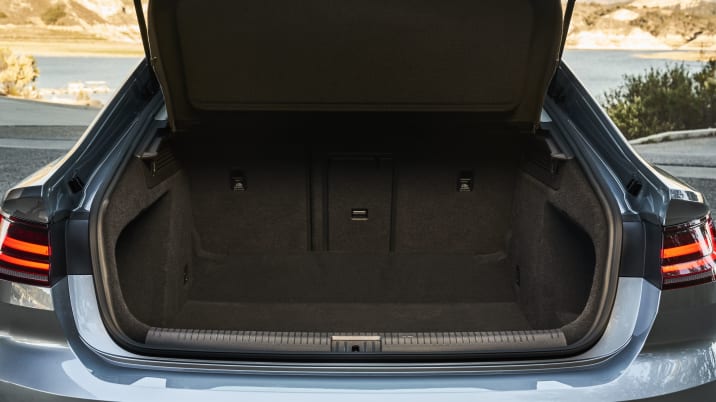 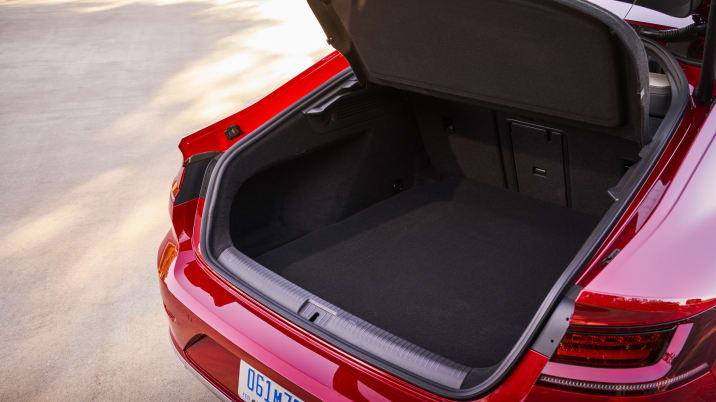 While there's a certain joy to flinging sporty sedans across canyon roads, most Arteons will be tasked with urban and suburban duties. Though the MSRP can get steep with SEL and SEL Premium models, the Arteon's upsides includes real world usability with spacious rear quarters and 27.2 cubic feet of cargo capacity (or cavernous 55 cubic feet with the rear seats folded). The hatchback-like trunk adds to the sense of, ahem, utility.

But overall, the Arteon is more of an emotional play than a practical one. Volkswagen points out that though declining, the sedan market is still "enormous," constituting 4.25 million sales last year, more than the entire of the German market. If you must go crossover or SUV, there are more options than ever to satisfy your needs. The Arteon goes its own way, playing on the allure of cool lines, a sleek silhouette, and understated utility.