Maxwell transplants the guts of a Volt into a Ram ProMaster

View All Specs
Add a Review
The Maxwell RHEV looks just like any small business' panel van, sporting large vinyl graphics and unassuming steel wheels. You'd have no idea that the co-founders of the startup based out of Seattle had grafted a salvaged Voltec powertrain from a junkyard Chevy Volt into this Ram ProMaster. Somewhere, a battery pack lurks.

Maxwell's co-founders, CEO Max Pfeiffer and engineer Trey Camp, open the cargo area to reveal a completely unaltered space. Both are ex-Tesla employees with a long fascination for the #vanlife movement – that their interests intersected in a hybrid cargo van isn't surprising once you start talking to them. This is their first vehicle, a salvaged ProMaster sidelined with a blown 3.6-liter Pentastar, and it's both their prototype and the only Maxwell in existence right now. That said, the company is building a low-roof version for a customer, which will be lighter, have less aero drag and therefore be more efficient. The company is just emerging from a stealth startup mode, and while their backstory is fascinating, I'm still wondering where the Volt's 18.4 kWh battery pack is.

"There's nothing in the back ... we're able to get the battery underneath the floor, in the center," Pfeiffer says. Ducking my head under the side reveals, sure enough, a little underside blister that contains the battery, tucked up neatly. The other changes to the RHEV – short for Range-extended Hybrid Electric Vehicle – are minimal.

He pops the hood. There are some rough edges, but the 1.5-liter, 101-horsepower engine and 48-kW motor fit comfortably on custom engine mounts and with re-routed exhaust, behind a fascia that improves aero and houses the charge port. Custom axles send power to unaltered Ram hubs and brakes. 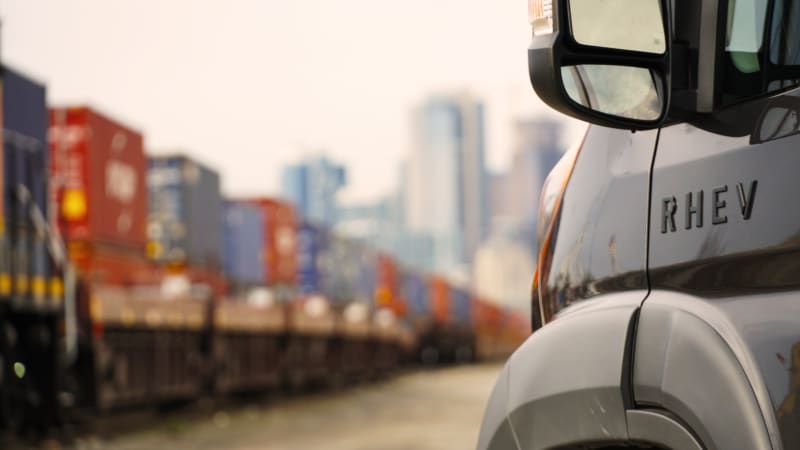 "This version, it's a little bit prototype-y," Pfeiffer says. "We've had more time to work with the CAD [computer-aided design, engineering drawings] we were able to get from GM and Chrysler, and we've done a better job packaging for production." GM already spent billions on the Voltec and its controlling software, and Maxwell can happily ride those coattails. Despite the help GM has lent Maxwell, there are no official ties.

An emulator sends spoofed signals to the Ram instruments, which have a new custom-printed face. The Ram's body control module is left alone. For powertrain faults, Maxwell says the vehicle can theoretically be serviced by any Chevy dealer, and any issue with the rest of the vehicle can be handled by a Ram service shop. [ The company is working on service arrangements, which aren't finalized yet. Currently servicing will be handled by independent hybrid and EV specialty service shops. - Ed.]

The result of the engine transplant could be construed either negatively or positively. The 3.6-liter V6 was good for 280 horsepower and 260 pound-feet of torque, while the Voltec that took its place makes 149 hp and 294 lb-ft. The Voltec lacks the sheer grunt of the gas engine, and once the battery is depleted – something we weren't able to test in our short drive – Maxwell admits the gas engine works pretty hard to keep the RHEV moving at higher freeway speeds, although maintaining 60 mph shouldn't be too much of an issue. But it's also perfectly adequate – and that's a compliment. 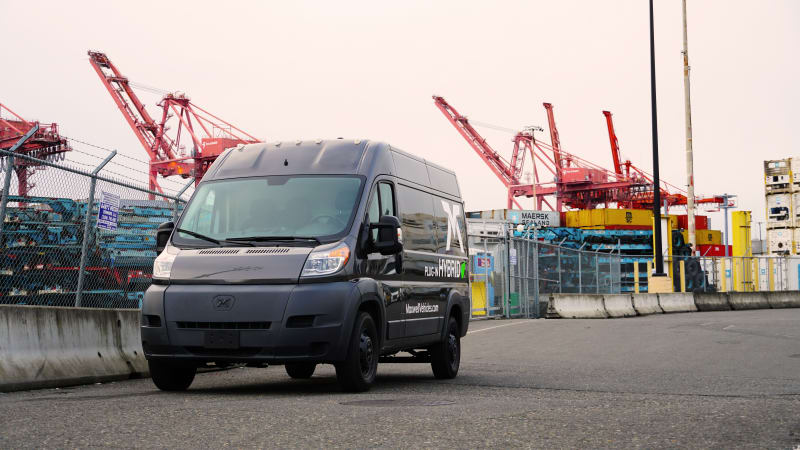 Maxwell's claims are ambitious, and perhaps optimistic, but don't rise to the level of fantasy. In ideal circumstances, an RHEV should hit 40 miles of electric range on a full charge, and achieve 33 mpg combined when operating in hybrid mode. Our test route in an unladen RHEV was just a hair over 20 miles, about 30 percent medium speed arterials and 70 percent freeway driving (traffic was moving about 60 mph naturally), starting with a mostly charged battery – the analog battery gauge made it tough to tell exactly. There were several steep hills and a few stop lights. When we pulled back into the charging station we started off from, we'd just about drained the battery down to the buffer level it needed to operate in hybrid mode.

It wasn't an ideal test, but on balance it's hard to be disappointed with the result. There are many much smaller PHEVs on the market that can't manage a 20-mile EV range. And a lower-speed urban route that more closely resembles a local delivery path would likely reveal a greater benefit. Consider a parcel delivery driver's route, which in urban areas is generally less than 100 miles a day – the range I achieved would still be a not-insignificant component of the total mileage. And remember, the Voltec holds a charge buffer to operate like a hybrid.

For better or worse, the RHEV drives a lot like a regular Promaster – goofy ergonomics and all. The Promaster feels much more like a cabover truck than many of its competitors, but none of that is Maxwell's fault. And given the fairly crude mule-like state of this first RHEV, the driving experience is surprisingly normal. I noticed some vibration at certain speeds through the steering wheel, and the steering rack – now electrically-assisted rather than hydraulic – felt weirdly numb in certain situations, but these are the sort of calibration problems that get ironed out with the second vehicle. As too will a distracting ramp-up in regenerative braking at a certain threshold on throttle lift-off, which simply calls for a software tweak. Those teething problems aside, the Maxwell drives like a used van – period. There's no futuristic whistle underway or backup chime in reverse, no unnaturally slow throttle response. It's a very normal experience. 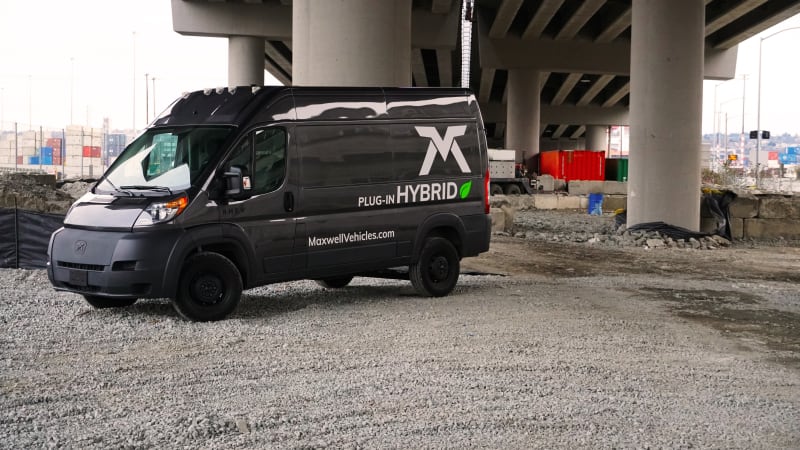 The trick to understanding what Maxwell is doing here is to imagine the customer: the local or regional business or fleet user – a delivery driver. Operating costs are paramount, and fuel is perhaps the biggest component that operators have control over. By using salvaged powerplants for the retrofit, the initial costs are reduced as are the lifetime running costs.

The company says there's a steady supply of sub-50,000 mile, junkyard-sourced powertrains, plenty to supply the company's optimistic 500 conversion-a-year target, which would otherwise be scrapped. Scrapping a Voltec powertrain would lead to an energy-intensive recycling and process, in addition to the energy-intensive manufacturing process to create a powertrain to replace it. It takes a lot of juice to recycle aluminum, not to mention what's involved with a lithium-ion battery pack. In circumventing that recycling process, Maxwell expects 200,000 miles more out of its salvaged engines – a productive and efficient life rather than an energy-intensive death. If a buyer really wants a new unit, the batteries and Voltec powertrain can be sourced for a substantial additional cost. Maxwell is currently taking orders and expects to deliver its first vans this summer.

There's also no big manufacturer competition right now, so any aftermarket hybrid van has the potential to show great returns on the investment compared to a conventional gas- or diesel-powered van. An RHEV starts at $46,990 (starting with an off-lease ProMaster), and a conversion of a customer-supplied van starts at $32,990. At 50 miles a day, Maxwell expects buyers who convert an off-lease ProMaster to recover its premium in 52,000 miles, with plenty of life thereafter. There's nothing too surprising there, since electricity rates are a fraction of gas prices. But of course, anyone in charge of their fleet will want to run the numbers themselves.

For its intended audience, the RHEV as billed is exactly what you'd want – zero drama, maximum ROI, no frills. If it keeps the fleet manager happy with limited downtime and fuel costs, and doesn't leave the drivers stranded, it's doing its job. For the rest of us without a delivery fleet to maintain, you might be interested to hear that Maxwell is in talks with some RV upfitters to turn their hybrid conversions into the sort of eco-conscious camper van they had always dreamed of.

This article has been slightly edited to clarify a few details about initial state of charge for our test drive, and Maxwell's vehicle servicing arrangements. 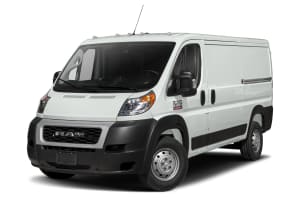