Plus, an update on where the Japanese brand is heading

The 2020 Mitsubishi Outlander Sport initially showed us its new sheetmetal at the Geneva Motor Show, but we got a chance to check out the vehicle in the flesh at the company's research and development center in Ann Arbor, Mich., today. Nearly everything we learned about the Outlander Sport (known as the ASX in other markets) before applies to the North American version of the vehicle.

However, one aspect we were uncertain of was the continued presence of the manual transmission. We asked, and Mitsubishi is officially dropping the stick shift version of the Outlander Sport with this update. It was previously only available on the base trim level, exclusively paired with the 2.0-liter four-cylinder engine. Mitsubishi was one of the last holdouts to offer a manual transmission option in the small crossover market, and now they're officially out. Three-pedal versions of the Outlander Sport represented just 2% of total model sales, so the business case just wasn't there anymore.

We confirmed that the powertrains from the 2019 model year car will carry over to the 2020 Outlander Sport, which means you'll have the choice between the 148 horsepower 2.0-liter or the 168 horsepower 2.4-liter four-cylinder. Both engines are paired to a CVT. Of course, all-wheel drive will also continue to be available optionally.

The big changes are in the styling that Mitsubishi thinks will make it stand out among competitors. Looking at the crossover directly in the face gives us a real truck-like and rugged vibe. This is where Mitsubishi put most of its eggs, appealing to folks who want a tougher looking vehicle. To our eyes, the execution comes off as a bit haphazard, lacking in cohesiveness with the sheer number of things going on. There's gray satin plastic, piano black plastic and flat black plastic all hanging out next to each other. Then the "shield" sort of juts outward at us, standing in stark contrast with the shiny reflective surfaces on either side of it. Judge for yourself, but the previous design was slick and much simpler than this mash up. 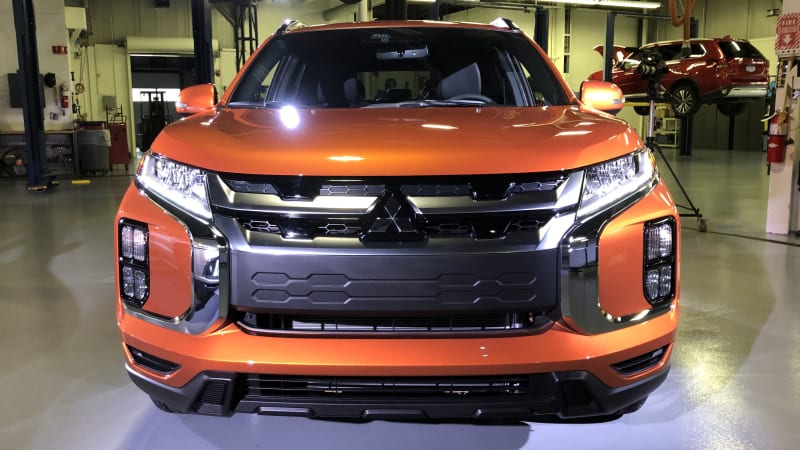 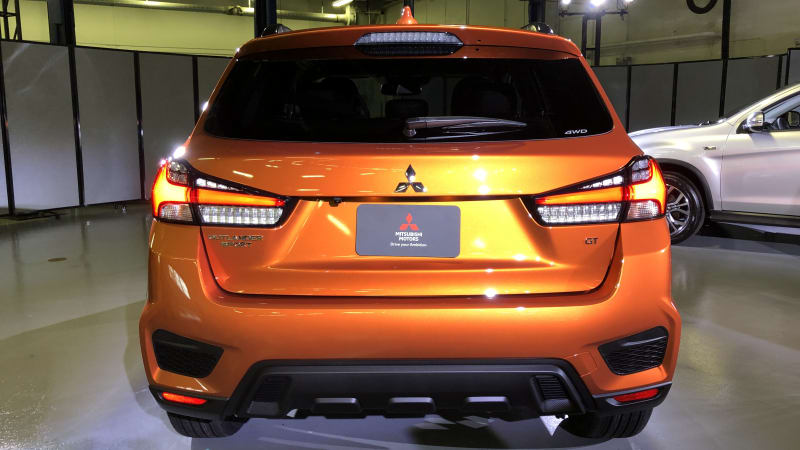 Mitsubishi kept things relatively subdued out back, and we like the evolution of the taillights and rear bumper here. There isn't much to speak about down the sides other than a different wheel design and a small fake vent added.

One could argue the interior was the Outlander Sport's sorest point, but sadly Mitsubishi chose to neglect this part of the car. The touchscreen is 1-inch larger (still supports Apple CarPlay and Android Auto), some of the dials have grippier surfaces to grab onto, and the pillars and headliner get done in black. Given how aged this interior felt before the update, we imagine it's going to be rather dinosaur-like by the time Mitsubishi finally gets around to a complete redesign.

Pricing is still unannounced, but we're told to expect it to mirror the current car's strategy of coming in on the low side of the competition. A base 2019 Outlander Sport with an automatic transmission comes in at $23,240 after the $1,095 destination charge.

As we stood around staring at the newest Mitsubishi, our minds drifted to the Lancer Evo glory days. Mitsubishi director of product planning Nate Berg told us not to expect any kind of a performance variant of a crossover or standalone vehicle when we asked. Sigh. The business case apparently just isn't there for making a low-volume hotted-up version of a crossover or SUV currently in Mitsubishi's lineup.

Berg does perk up when we ask about electrification, though. There's no timeline, but Mitsubishi does plan to release even more electrified vehicles in the future beyond the Outlander PHEV. We're told the Renualt-Nissan-Mitsubishi alliance should help there, as some Mitsubishis in the future will use platforms shared amongst those companies. Again, the timing question still has no answer.

Given the recent scuttlebutt about a possible Mitsubishi pickup truck, we felt it prudent to attack that topic with Berg, as well. He didn't give us much beyond what we already know. For now, Mitsubishi is "studying" the possibilities; the dealers want one, but they're not going to jump in quickly to anything for now.