You can buy this Robocop Ford Taurus police car replica

But you can't buy it for a dollar.

Last week, we were all collectively taken aback by what was surely the most expensive Ford LTD wagon anyone had sold for quite a while: the National Lampoon Family Truckster, which brought in around $100k at a Barnett-Jackson auction. But this week, there's a completely different movie Ford on offer, one that can be bought for a fraction of that hammer price.

Name all the movies where a Ford Taurus has had top billing. Few films give the first generation Taurus more screen time than Robocop (1987), arguably Paul Verhoeven's finest hour as a director. In the modern sci-fi classic, Peter Weller's composite-clad cyborg hoons around Detroit in a suitably futuristic aero Taurus, cementing the car's 15 minutes of fame and even warranting it a place in the movie's iconic poster. After the film's release, it's likely that countless beater Tauruses have since been rattlecanned in police livery to match the Robocop OCP police fleet, with varying levels of attention given to detail.

This particular matte black '86 Taurus LX is one of the more faithful recreations, good enough to warrant a Peter Weller signature on its dashboard, as it's been used in a Robocop anniversary event just a couple years ago. As well as that movie star acknowledgement, the Taurus cabin also features a ton of bolt-on retro tech to complete the look. Sadly, the Taurus isn't currently running, but anyone with access to a replacement Taurus ECU and relay box can get the hero car back on the streets in no time. The weathered look is even movie correct, as the movie's police fleet wasn't exactly treated gently, and they fit the dystopian and grimy, Omni Consumer Products controlled Detroit especially well. Fittingly, the Taurus is located in Dallas, parts of which stood in for Detroit when the movie was shot.

The eBay Buy It Now price for the Robocop Taurus is a penny under $5,000, which is probably strong money for a lightly beat-up '86 Taurus with an ECU fault, but not really that much for a movie recreation that's had some thought put into it. As for us, we'd probably ask the seller to throw in a Blaupunkt. 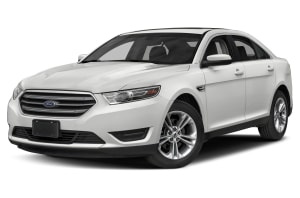