For its fleets and its individual customers

Automakers are looking for every way to make their companies more friendly to the environment. While electric vehicles represent the most public-facing plan, there are several other steps manufacturers are trying to build a greener and more sustainable future. Porsche is focusing part of its energy on offsetting the carbon dioxide released from internal combustion cars it is using, has sold, is selling, and will sell in the near future. All of the company's U.S. fleets will now be carbon-neutral, and a program called Porsche Impact will give customers a chance to offset their carbon emissions.

Announced on Earth Day, Porsche will include all cars — about 425 of them — from its Los Angeles and Atlanta Porsche Experience Centers in its carbon-offset programs. Vehicles from the Porsche Passport subscription and Porsche Drive rental services will also be included.

Helping Porsche to offset its footprint is South Pole, "a leading provider of global sustainability financing solutions and services." Using South Pole, Porsche can designate money toward sustainability projects that counteract fossil fuel emissions, and later this year, customers will be able to do the same. 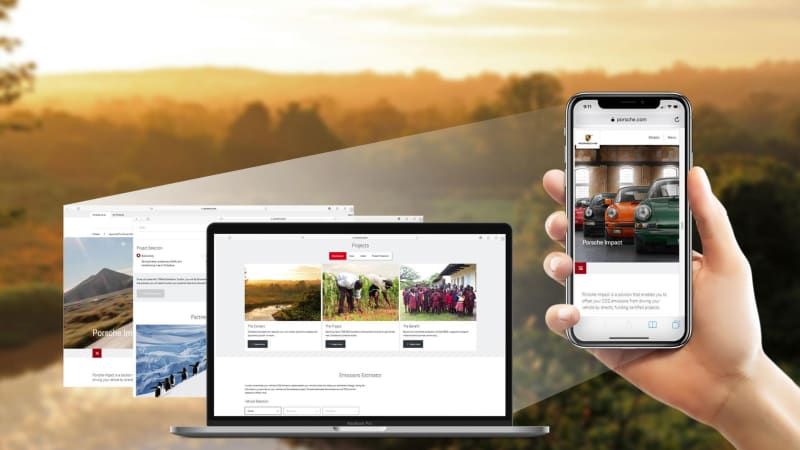 Using the Porsche Impact tool, owners and customers can estimate the cost of their driving. Judging by the mileage driven, the achieved miles per gallon, and the type of fuel, the tool will determine how many tons of carbon dioxide a person has produced. The person then selects a project to fund. The biodiversity project helps forests, wildlife, and people in Zimbabwe, the solar project puts money toward Latin America's solar power in Mexico, the water project helps renewable electricity and cleaner air in Vietnam, and the forest project helps protect the spruce forest on Afognak Island in Alaska.

Depending on the project, somebody who drives a 2019 Cayenne S for 10,000 miles per year would need to pay from $67 to $152 each year to offset his or her footprint. Such programs have already been in place in other markets, but 2019 will be the first time Porsche offers it for the U.S.

Of course, nobody has to rely on Porsche to offset their carbon emissions. There are many other ways to do so on a completely individual basis.