The 2020 Lincoln Corsair compact crossover was introduced this year to replace the aging MKC. Our first impressions are that it's a thoroughly competent luxury machine, but where it fits in the market is interesting. Given its size and price tag, the Corsair basically slots in-between compact segments, with vehicles like the Audi Q3 below and Audi Q5 above. It's a distinctive position to be in, but not a unique one, as there's another comparably sized and priced SUV -- and an American rival, no less. The Cadillac XT4 was launched just last year to be its company's smallest crossover, boasting compelling design and ample technology features.

So which is better? To give you some idea, let's take a look at each vehicle's horsepower, torque, fuel economy, space, pricing and some slightly more subjective aspects about their luxuriousness and feature sets. You'll find all the nitty gritty numbers below, followed by more detailed analysis. And if you'd like to compare other luxury crossovers, be sure to check out our comparison tool. 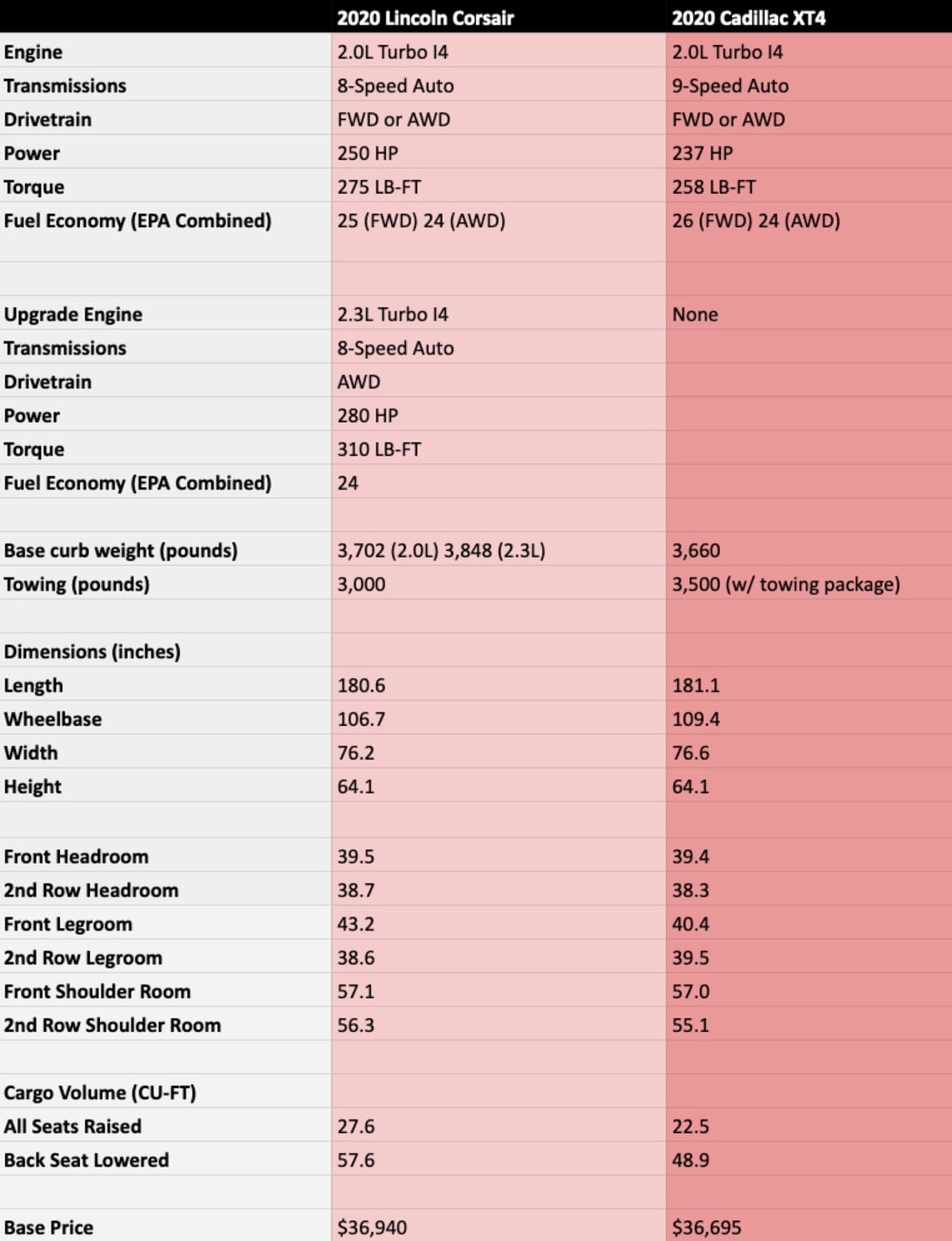 Both the Corsair and XT4 come standard with turbocharged 2.0-liter four-cylinder engines, but the Corsair's is more potent with 250 horsepower and 275 pound-feet compared with the 237 horsepower and 258 pound-feet of the Cadillac. And to seal the deal, the Corsair has an optional turbo 2.3-liter engine with 280 horsepower and 310 pound-feet of torque. That's not only vastly better than the Cadillac, but one of the most powerful outputs in the compact luxury SUV segment. Both vehicles have standard front-wheel drive with optional all-wheel drive on the base engines. The 2.3-liter Corsair has all-wheel drive standard. The Cadillac does boast an extra cog in its transmission over the Corsair's eight-speed automatic, but there's not necessarily an advantage or disadvantage to be gleaned from that.

In practice, the power from the Corsair's engines is impressive, though they aren't the most refined engines. The eight-speed automatic transmissions are unintrusive. The Cadillac displays impressive refinement from its four-cylinder and its nine-speed automatic. Both cars will allow you to select gears manually, but only the Cadillac has a fully manual mode that won't switch back to automatic shifting after a short time. By the numbers, the XT4 is the larger of the two crossovers, but only slightly. It's about half an inch longer and a few tenths of an inch wider than the Corsair. The XT4 also features a longer wheelbase. Despite the larger size, the Cadillac can only claim victory in rear seat legroom, and only by 1 inch. In every other dimension of headroom, legroom and shoulder room, the Corsair is larger. The biggest gap is in front legroom, where the Lincoln has 3 inches over the Cadillac.

We've spent some time in the cabins of both crossovers, and we prefer the Lincoln. The XT4 certainly has some nice leather and soft-touch plastics, but the large, dark panels give it a drab and dull look. In contrast, the Lincoln has a brighter, more airy feel thanks to the low dash that's broken up into multiple layers, as well as plenty of contrasting colors and textures from different shades of leather to the chrome accents. As an added bonus, this writer found more legroom behind himself in the Lincoln than the Cadillac, despite what the numbers say. Both of these crossovers start at nearly the same price. The Cadillac's $36,695 base price is just barely cheaper than the Corsair's $36,940 tag. The Corsair can quickly get expensive, though, with the top all-wheel-drive trim starting at $45,825 and the top all-wheel-drive Cadillacs start at $43,290. Both crossovers can quickly rise above $50,000 as the options pile up, and one of the Corsairs we've driven crested $60,000.

As for standard features, the Lincoln comes with a number of handy safety features as standard including automatic emergency braking, lane-keep assist, blind-spot warning and automatic high beams. The base Cadillac XT4 now includes forward collision warning and automatic emergency braking as standard. To match the Lincoln's safety feature set requires adding some options to the Cadillac, though.

Aside from safety features, the two crossovers are very similar, both offering ambient lighting, wireless charging, massaging seats, adaptive cruise control, active noise cancellation. The Lincoln does include heated front seats standard, whereas it's an option on the XT4. Both offer upgraded sound systems, with the Lincoln opting for a 14-speaker Revel system and the Cadillac going with a 13-speaker Bose system. The Lincoln also offers lane-centering, which the Cadillac lacks, and the Lincoln's massaging seats have 24-way adjustments. The Cadillac does offer the most infotainment screen real estate standard with its eight-inch display, while the Lincoln only offers an eight-inch display as an option. The Cadillac also offers heated rear seats, which don't appear to be available on the Lincoln. 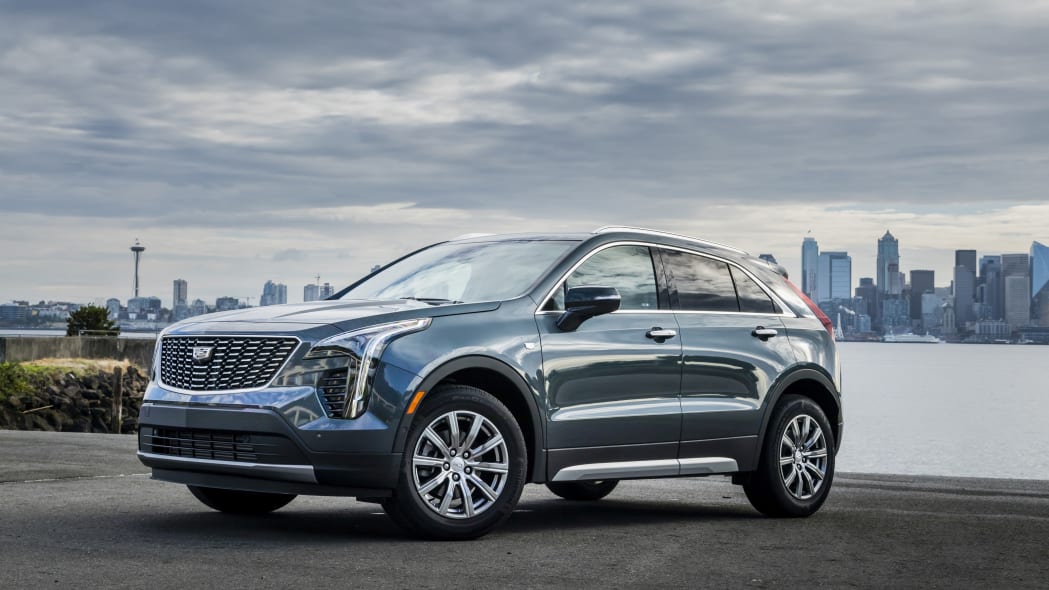 
2019 Cadillac XT4
Read our first drive review of the XT4