GM scratches Chevy Blazer from the lineup at Comerica Park

Sven Gustafson
The red Chevrolet Blazer RS that GM hoisted onto to the centerfield display at Comerica Park, home of the Detroit Tigers, had an all-too-brief run in the majors, its promising rookie season cut short by complicated forces beyond its control before seeing a single game, replaced on the roster by a wily veteran with less flash but a bit more girth and power.

The Detroit Free Press reports that GM quietly and without fanfare took down the Blazer from the centerfield Chevrolet Fountain display over the weekend and replaced it with a white 2019 Chevy Traverse. The reason? Controversy over the Blazer's made-in-Mexico bonafides and the potential to sow discord among UAW supporters and members, who had lobbied hard to get the all-new SUV in a U.S. plant, are fighting to keep GM from closing four domestic plants, and who will negotiate new labor contracts with the Detroit automakers this year.

GM also swapped the silver Silverado 1500 LT Trail Boss for a red one, presumably to add some visual pop. The Silverado is built in Fort Wayne, Indiana, while the Traverse is built up the road from Detroit at the Lansing Delta Township plan.

GM last week had hoisted the Blazer atop the centerfield display as part of a 10-year sponsorship tradition of displaying new vehicles at the ballpark. They replaced a Traverse and a Colorado ZR2 from the 2018 season. Chevrolet is the Official Vehicle of Major League Baseball, and the vehicles displayed on the Chevrolet Fountain appear every time a Tigers home is broadcast on television.

But the Blazer lasted less than a week, and was removed before the Tigers host their home opener on Thursday. "We want people to enjoy baseball without distractions, so we are going to replace the Chevrolet Blazer with a Chevrolet Traverse at the Comerica Fountain," GM said in a statement. "American workers contribute significantly to the success of the Chevrolet Blazer. The Blazer generates more than half a billion dollars into the U.S. manufacturing economy each year, helping support thousands of good-paying U.S. jobs."

Both engine options for the Blazer are built in the U.S. — the 2.5-liter four-cylinder is made in Buffalo, New York, and the 3.6-liter V6 is built in GM's Romulus Powertrain plant near Detroit — and more than half of its components are sourced from U.S. and Canadian suppliers, Cain told the Freep. The Blazer just went on sale earlier this year and is still ramping up production. 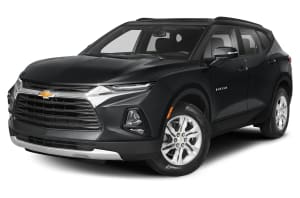