The GLI's greatness is only tempered by the GTI's existence

View All Specs
Add a Review
It's my long-held professional opinion that the seventh-generation Volkswagen Golf GTI is the best all-around enthusiast transportation device. It does more things better than anything it competes with and embarrasses cars costing twice as much with its better overall refinement and build quality. That's great news for the 2019 Jetta GLI, since it's effectively a GTI with a trunk that comes standard with a 20 percent off coupon. That saves you a whopping $7,100, and since the Jetta and Golf are the same basic car, that makes the Jetta GLI the best all-around enthusiast transportation device with a trunk.

Oops, I gave it all away too early in the review. Or did I? There's always fine print on those darn coupons, and the Jetta's reveals a few significant differences. First, the 20 percent discount applies only to the most expensive Autobahn DSG trim level, which is a screaming bargain at $30,890. The cheapest GLI you can buy, the S with a six-speed manual, is $26,890, and that's only $1,600 less expensive than the base Golf GTI.

Amazingly, despite being cheaper than the GTI, VW's hot sedan comes standard with a bunch of very worthwhile features not present on the entry-level hatchback variant, including LED headlights, dual-zone automatic climate control, keyless entry, blind-spot monitoring, forward-collision monitoring with automatic emergency braking, and an automatic dimming rear-view mirror. It also has a wheelbase that's two inches longer than the Golf's, 1.8 inches of which goes directly to rear-seat legroom. 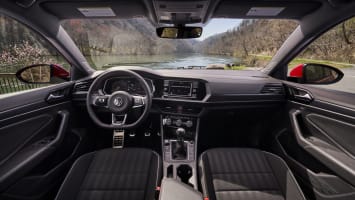 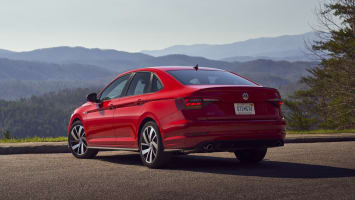 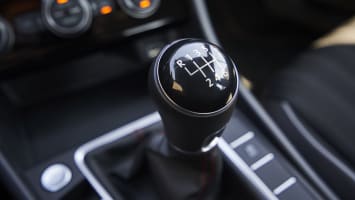 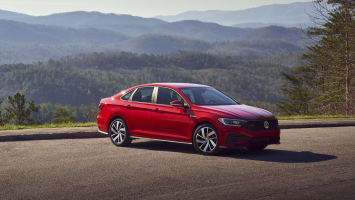 That's a lot of free stuff, especially since the cars are mechanically identical except for the aforementioned wheelbase stretch and a few small details. According to VW, the Jetta weighs 29 pounds more, all of which is presumably at the rear, and it receives a slightly thicker anti-roll bar (up by 1.7 mm to 21.7 mm) to compensate. It shares the GTI's front brakes, but in place of vented 12.2-inch rotors in the rear, it makes do with solid 11.8-inch units. That's likely due to the Jetta's electric parking brake — using the Golf's mechanical handbrake would force a rework of the Jetta's center console. Finally, the Jetta GLI rides on slightly taller tires, 225/45-18 in place of the GTI's 225/40-18s.

That's it. The Jetta gets the GTI's riotous 2.0-liter turbocharged inline-four, with identical 228 horsepower and 258 pound-feet of torque. It gets the same exact transmissions — VW's light-effort six-speed manual or seven-speed dual-clutch DSG. It inherits the GTI's progressive steering rack that manages to combine just 2.1 turns of lock with zero on-center nervousness. And it gets Volkswagen's wonderful electronically locking front differential.

Volkswagen wisely chose to debut the GLI on the famed Tail of the Dragon on the North Carolina-Tennessee state line, known for its 4 million (or so) off-camber, decreasing radius hairpin turns over two hundred (or so) miles, with a thousand-or-two-foot drop on either side. ( That's 11 miles and 318 curves, in actuality, but that doesn't sound as impressive. – Ed.) Too bad it was 38 degrees Fahrenheit, socked-in with fog, and raining when we arrived in our GLIs — which were equipped with summer-only tires. VW claims these tires are a no-cost option in the order guide, but I've never seen them on a car at a VW dealership. No one should be forced to drive a performance sedan on sad-sack all-season tires, so talk to your dealership about the summer tires before signing on the dotted line. 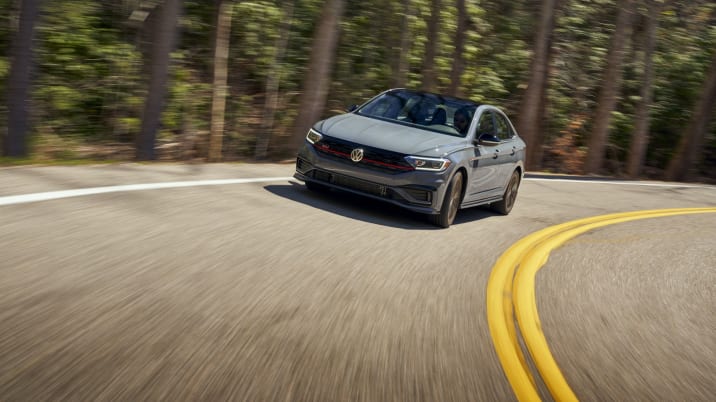 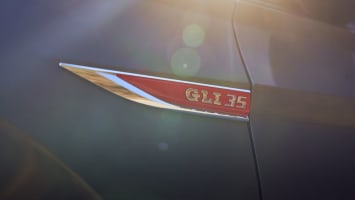 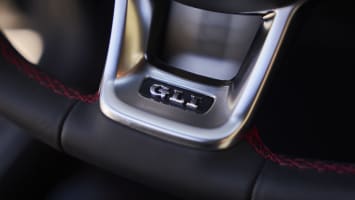 Anyway, it's safe to say that the Hankook Ventus S1 Evo 3 tires were not in their element in these conditions, and yet the Jetta surefootedly slayed the Dragon. Thanks to that locking diff, the GLI's ability to put down power is breathtaking. The electric steering filters out any torque steer (and sadly everything else you might want to feel from the front wheels), but the GLI explodes out of corners as if it were equipped with all-wheel drive.

That exit speed just meant more work for the brakes at the end of each short straightaway, but they easily shrugged off the thermal load. At the bottom of the mountain, the only thing heated up in the Jetta GLI was its driver — there was no brake fade, and the engine coolant and oil temperatures had barely risen.

A few hours later, we ran the Dragon the other direction in a DSG-equipped GLI. This time, the road was dry and the sightlines were clear. The verdict? Damn, son. You'll have to work hard to find a car that'll keep up with the Jetta GLI on a tricky mountain road — both in terms of speed and fun. In these conditions, the GLI is every bit a GTI, and that's a high compliment indeed.

Some additional fine print: the new seven-speed DSG is geared far shorter than the six-speed manual, so it feels even quicker in the 25- to 65-mph speed range you'd see on a tight road like the Dragon. But unlike in the GTI, it doesn't bang off instant upshifts with those oh-so-satisfying exhaust burps. Instead, it slurs its upshifts more like a conventional automatic, and the Jetta's exhaust is basically silent. The solution is to do what nearly half of GTI buyers are smart enough to do anyway: buy the manual. And then put the GLI in Sport mode for commendably realistic in-car noises that replicate a cold-air intake. 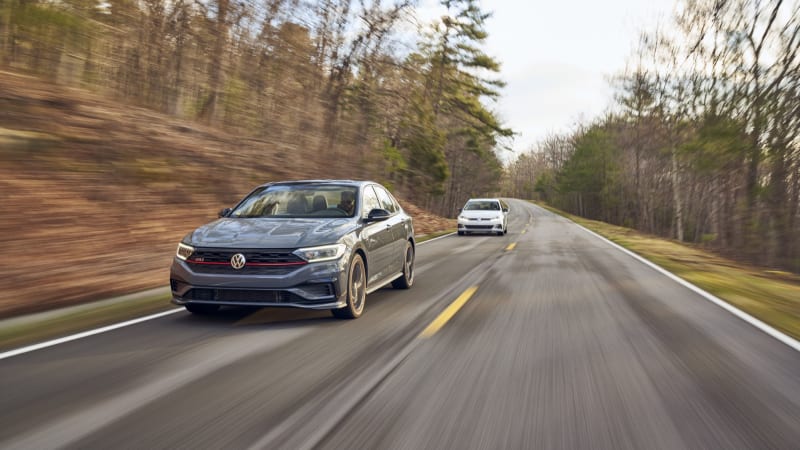 The GLI doesn't turn into corners with quite the same playful enthusiasm as the shorter GTI, and its suspension tuning seems a notch or two softer, with extra roll and pitch. The flip side of that is a greater feeling of stability, helped by the rear-end's lack of willingness to rotate. Whether trail-braked smoothly or flicked violently into a corner, sadly it's the Jetta's front end that lets go first.

VW's DCC adaptive dampers can be set to stiffen the ride up back to GTI levels, but they're only available in the 35th Anniversary trim, which comes with dark-gray rims wearing amateur-hour red stripes on them. The Anniversary also comes without a sunroof, the Autobahn's bigger infotainment touchscreen, cooled seats, or its fully digital instrument cluster. And this is one of those rare cases where the analog gauges look cheap and the digital dash is just more ... special.

Speaking of which, since you've made it to the end of the review, I'll finally tell you why the GLI isn't quite as good as the GTI: It just doesn't feel as special. There's a sense of cost-cutting in the interior — the Golf's dash, door, and center console materials are considerably better than the Jetta's. Many of the little convenience features are missing, like the hatchback's delightful telescoping, pivoting driver's armrest; climate vents in the rear, or even a stereo that sounds like it was made in this century. And, let's face it, the Golf's design is far more mature and sophisticated inside and out.

There's a specialness to everything about the GTI, and the plaid icing on its hot-hatch cake is its incredible interior fabric. The GTI's seats are among the best in the automotive universe — they're enormously bolstered and as comfortable as a hug from your grandmother, but that's just a bonus. It's their appearance that clinches it. There isn't a person alive who could climb into a plaid-cloth GTI and think they're in "just a Golf." 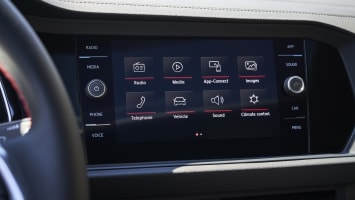 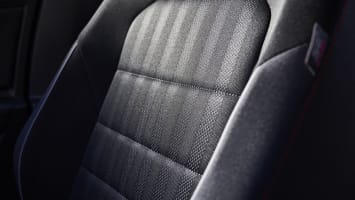 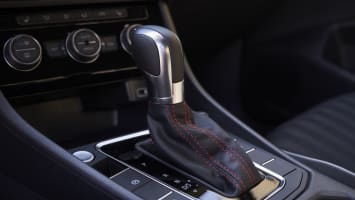 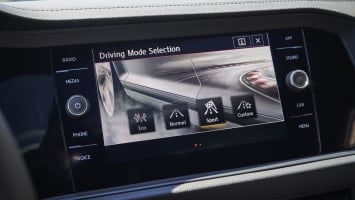 That's not exactly not a bad thing, especially considering the GLI's value and performance. But when you drill down into the fine print, the GTI remains the best enthusiast car you can buy. Some things are worth the extra money. 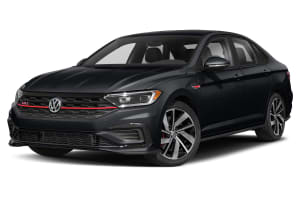