The late Woodward Avenue street racing legend Joe Ruggirello would have enjoyed ripping through the gears of this supercharged 710-horsepower 2019 Roush Mustang Stage 3. After a few good hard launches and some violent 7,500-rpm power shifts, he probably would have said something like, "Jack Roush still knows how to build a fast Mustang, but mine would have blown its frickin' doors off."

In 1975, when Jack Roush was a championship-winning Pro Stock drag racer, he built Ruggirello the meanest street Mustang in America, a little Mustang II with a monster 505-cubic-inch big block and other Pro Stock spec components. Nicknamed "Sudden Death" by Hot Rod Magazine, the silver hatchback with massive 13-inch-wide Firestone slicks was good for 10-second quarter-mile times. It had already become a legend by the time Brock Yates featured the Ford in a 1976 issue of Car and Driver.

"If Detroit is the capital of street racing — which most insiders agree upon — and nobody there can beat the Mustang II, is this not the quickest street car of all?" Yates wrote in his famous exposé on Detroit's street racing culture.

Jack Roush, best known for his expansive Roush-Fenway NASCAR enterprise, opened Roush Performance in 1995, and he's been tuning factory-fresh Mustangs in Plymouth Township, Mich., ever since.

Much like Shelby and Saleen, who had come before, Roush sells finished cars and individual speed parts. Today, Roush Stage 1, Stage 2 and Stage 3 Mustangs can be purchased from hundreds of authorized Ford dealers around the United States and Canada. Many of those dealers also sell Roush's extensive line of speed parts, accessories and crate engines, which are also available online at roushperformance.com. 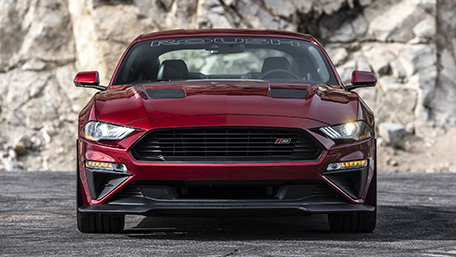 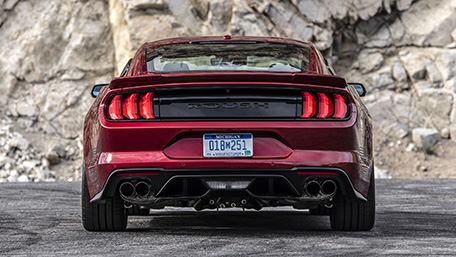 Stage 3 gets the supercharger

Before it became a Roush Stage 3 Mustang, our Ruby Red test car began life as a nearly loaded 2019 Ford Mustang GT with a six-speed manual transmission and a $48,335 sticker price. The Stage 3 setup is the hottest, which for $22,925 includes the same 2.65-liter TVS positive displacement supercharger Ford sells over the counter for the Coyote 5.0-liter V8 engine. It uses Eaton's new R2650 rotating assembly with rotors featuring 170 degrees of twist (up from 160 degrees) for better sealing and bigger bearings, and thicker timing gears for more durability. The kit makes 12 psi of boost and is emissions legal in all 50 states.

Roush says the blower cranks up the engine's power from its stock 460 hp and 420 lb-ft of torque to 710 hp at 7,250 rpm, and 610 lb-ft of torque at 4,500 rpm. Surprisingly the Mustang's stock clutch is untouched by Roush, but the Stage 3 Package does include beefier "extreme duty" half shafts, so they don't twist 170 degrees the first time you drop the hammer.

The Mustang's powertrain feels robust, like you can confidently stomp on it without utilizing the Roush Powertrain Warranty, which covers the axle shafts and other bits for 5 years or 60,000 miles. This is important since the Roush RS3 can blaze its 20-inch Continental Summer Tires through first and second gear. 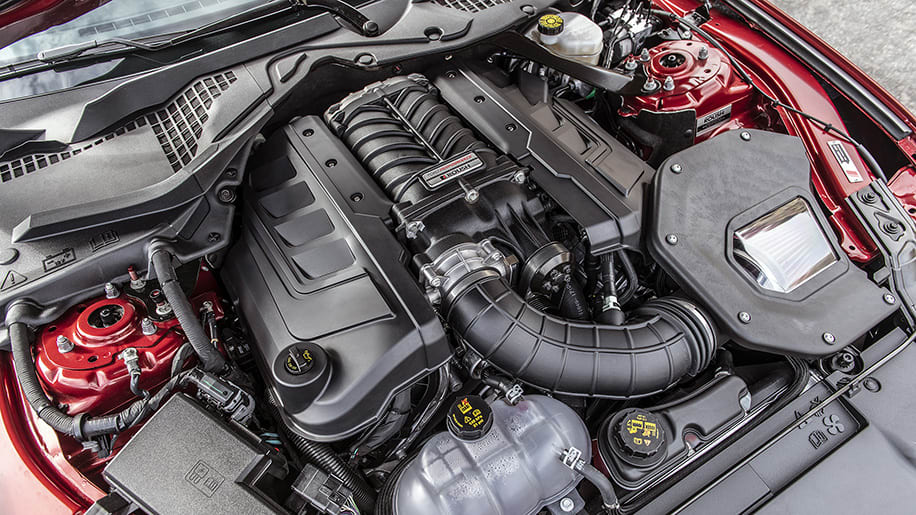 Throttle response is crisp, and the 5.0's power delivery is without any peaks or valleys. The supercharger doesn't change the engine's character, there's just significantly more power everywhere on the tach. In the old days enthusiasts would have called the Coyote, with its 7,400 rpm redline, a high-winding small-block. But with the blower jamming air down its throat, there's big-block bottom end torque as well.

That torque gives the Roush immediacy you just don't get in a Shelby GT350. However, if you're looking for the ferocity of a Dodge Challenger Hellcat, you won't find it here. Despite the Roush's blower and its 700-plus horsepower rating, it doesn't feel as snappy or as quick as a Hellcat, which at 6.2 liters has significantly more displacement. Like the Hellcat, the Roush would be much quicker with the shorter and more tightly spaced gears of its available automatic (10 speeds as in the Mustang GT).

The Roush is also much quieter than its rival Mopar. Hellcats have more blower whine than Max Rockatansky's Pursuit Special, while the Mustang RS3 sounds like a stocker — there's no blower whine to be found. Our test car's programmable Performance Exhaust system has a nice burble, but it doesn't exactly echo off the hills, even in the Track setting, which keeps the exhaust valves fully open with no restriction.

If you want to disturb the neighbors, you can custom program the system's sound with a WiFi OBD2 interface to a Roush Apple iOS application. Roush says it allows for nearly infinite exhaust tone configurations and owners can build their own exhaust note by controlling the exhaust valve based on rpm, vehicle speed and accelerator position. 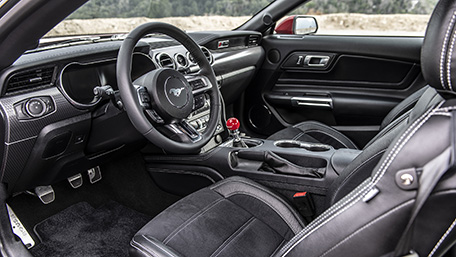 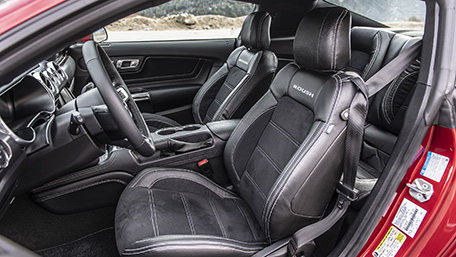 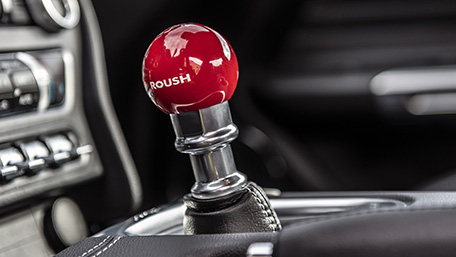 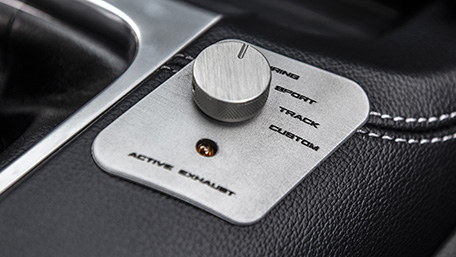 With its 3.73 rear axle ratio, the Roush made love to third gear on Angeles Crest Highway, just north of Los Angeles. The twisty two-lane is one of the greatest driving roads in the world, and the Mustang's broad torque band made changing gears unnecessary, even at a seriously quick pace.

There's always enough grunt to power out of slower corners, and the Roush will top well over 100 mph in third, so the next corner comes up quickly. Although stock, the Mustang's optional GT Performance Pack Brembo brakes are up to the task, with little fade during a hard run down the mountain. 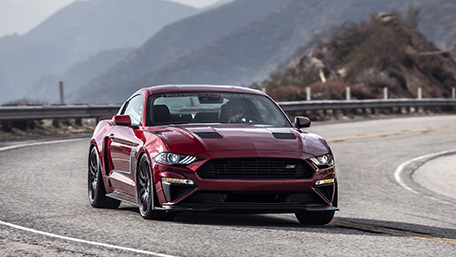 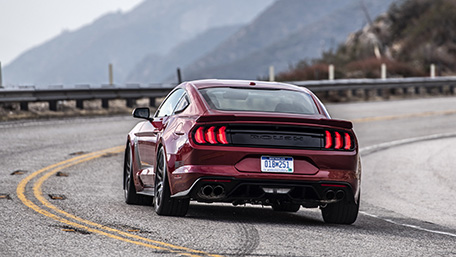 Twenty-inch diameter wheels and height-adjustable coilovers are also part of the Stage 3 Package, but our test car was upgraded with an optional set of 20-inch forged wheels and coilovers with adjustments for height, damping and rebound. As delivered, the suspension lowers the car 1.5 inches in the front and 1 inch in the rear, resulting in a ride that is firmer than a factory stock Performance Pack GT, Mustang Bullitt or Shelby GT350, all of which ride on 19-inch wheels and tires. Roush refused to share the Mustang's specific damping and spring rates, which are certainly more aggressive than stock. Still, the Roush is comfortable and refined enough for everyday driving. Impact harshness isn't a problem.

Neither is body roll, because there isn't any, and the Roush is stable on corner entry with a just a touch of understeer. Unfortunately, the Mustang's steering doesn't seem to like the Continentals much and goes painfully numb when you're pushing the Roush around. Too much throttle and you can drift this Mustang through three counties. Unless you're Vaughn Gittin Jr., this isn't a car you just get in, switch off the traction control and flog immediately.

Unlike the Ruggirello-Roush Mustang, the bulk of the Roush Stage 3 Package is cosmetic. Roush changes the grille, front and rear fascias, adds a deep chin spoiler, fake body side scoops, a small rear spoiler, hood heat extractors and assorted badging and stripes, which includes a windshield banner and hokey stripes. We counted the word "Roush" on this car 24 times. All Ford badging has been removed. Our test car's cool Quarter Window Scoops are a $370 option. 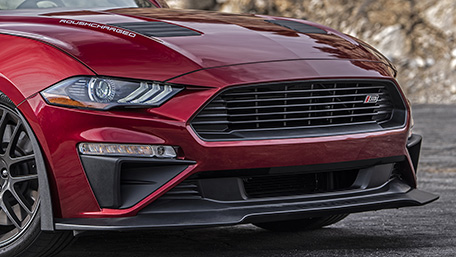 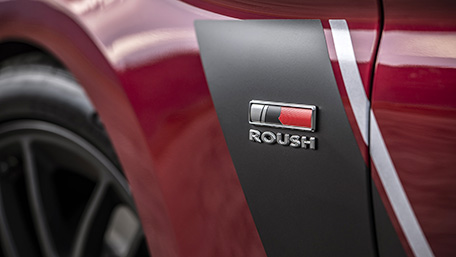 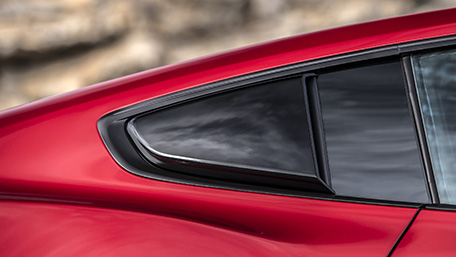 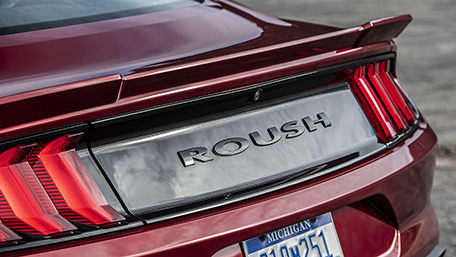 When we asked Roush how much weight its parts add to a Mustang GT, the company refused to answer, claiming the information is proprietary.

But crunching the numbers is missing the point. The Roush RS3 doesn't have to make sense. Making sense is for Camrys and Accords. You buy a Roush Mustang because you want it. Joe Ruggirello would approve.