Americans will finally get Subaru’s hottest model. It's worth the wait.

Add a Review
We're about 70 miles southwest of Tokyo on the grounds of Fuji International Speedway. Yoshihide Yano puts his hand on the camouflaged carbon fiber roof of the 2020 Subaru WRX STI S209 prototype we're about to drive and smiles. "This will never make a business case," says the assistant manager of Subaru's North America Business Planning Department. "We don't want to make more than 250. The more we make, the more money we lose."

From the wince of his co-workers, Yano is clearly off the script, but his statement isn't a huge surprise. Building the STI S209 is complicated and time-consuming, with most of its extensive engine, suspension and aerodynamic modifications being installed by hand at STI's small off-site headquarters just outside Toyko. Founded in 1988, Subaru Technica International is the automaker's motorsports division and employs only 120 people. It can produce just two cars a day. And why not show off your fastest street car ever on Fuji's world-class 2.8-mile road course? Especially today, while the track is packed for its annual STI Motorsports Day, a yearly pilgrimage for the brand's faithful. The place is flooded with WRXs, BRZs, and models we don't get in America like the Levorg STI Sport, a hot rod version of its mid-size wagon.

Although STI's new Super GT and Nürburgring race cars are making hot laps on the main circuit, our drive of the inexplicably camouflaged S209 (which was fully revealed at the Detroit Auto Show) is on a small half-mile road course tucked away in a remote corner of Fuji's massive acreage. And we get just three laps. STI's S-Line of cars have been the brand's most capable machines since the S201 launched in 2000, but the S209 will be the first S-Line model sold in the United States – and exclusively in the United States, for that matter. It will also be the first S-Line WRX that won't be powered by a modified version of the brand's venerable 2.0-liter EJ20 engine family, which Subaru introduced in 1989. The company says the EJ20 cannot meet emissions and make more than 300 horsepower on our low-octane fuel. The fix for this is a version of the turbocharged EJ25 series, which has powered every U.S.-spec WRX STI since we got it in 2003.

To create the S209, STI's engineers started by mixing together certain parts from both the S208 and the 310-hp WRX STI RA Subaru sold in America last year. The S209's Recaro seats and carbon-fiber roof are shared with the RA and are installed on the assembly line along with the S208's Alcantara-covered steering wheel. 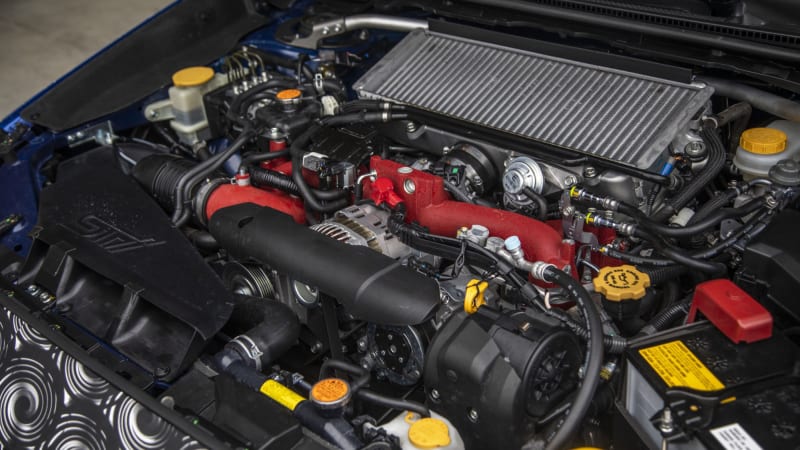 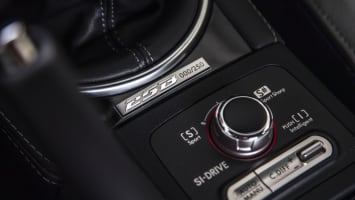 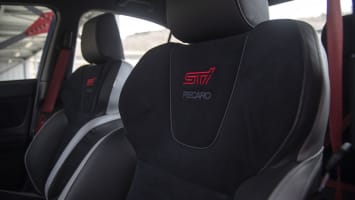 The 2.5-liter's redline is 7,200 rpm, just as in the RA, and its compression ratio remains 8.1: 1, but STI has increased power with a larger turbo for more boost, a high-flow air intake that has 5-percent greater diameter, and 20-percent more fueling thanks to a higher flow fuel pump and new injectors. Boost increases from 16.2 psi in the Type RA to 18 psi here, and STI fits stronger forged pistons and connecting rods at the factory to handle the additional power.

On the tight half-mile track, it pulls strongly from about 3,000 rpm to redline and uses second, third, and fourth gears managing 90 mph in fourth at the end of the brief front straight. It's about the same speed we achieve in the higher-revving S208 in third gear.

Would Be Faster With an Automatic

Subaru doesn't offer a 0-60 mph time for the S209 as testing is ongoing, but Hasegawa says it will be the quickest Subaru ever and he hopes for a time under 4.5 seconds. That would be more than a second quicker than the STI RA.

Although Hasegawa says this will not be the last STI to get a manual transmission, he admits the car would be even quicker as well as faster around a race track with an automatic, dual clutch or otherwise. The S209's top-mount intercooler is another piece of legacy engineering STI's engineers would like to change but can't because of cost and other corporate realities. A larger front mount unit would be much more efficient and allow engineers to find more power. 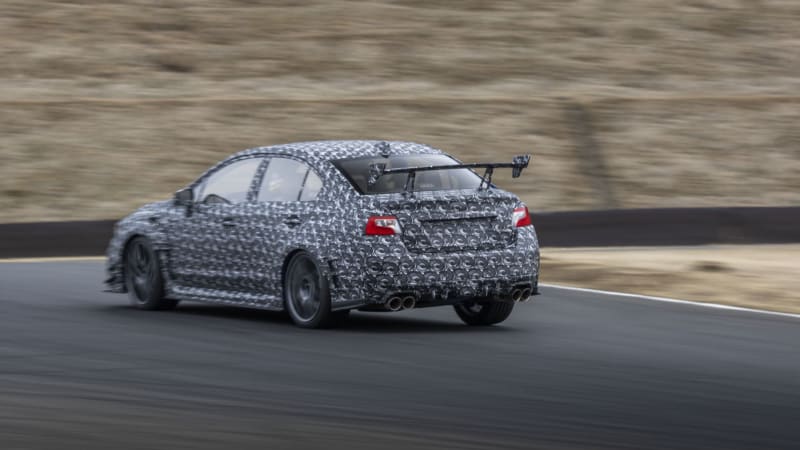 A partial band-aid for this issue is the S209's intercooler water spray system, which is installed by STI and activated by steering wheel paddle shifters. Unfortunately we didn't get to test its benefits during our very brief test drive.

STI also installs the S209's aero package, which uses the same large adjustable rear spoiler as the RA along with new rocker spoilers and low rear underspoilers behind the rear tires. The vents behind the rear tires, which STI says release pressure in the wheel well, are from the S208 Nürburgring Edition. Subaru says the S209 has more downforce but refused to get more specific.

STI's engineering team had tested the S208 extensively at the Nürburgring but didn't return to the infamous German circuit with the S209. Instead, the sedan was tested at Virginia International Raceway because it is the location used for Car and Driver's Lightning Lap competition. "It's 5 seconds faster around VIR than the RA," says a company rep. 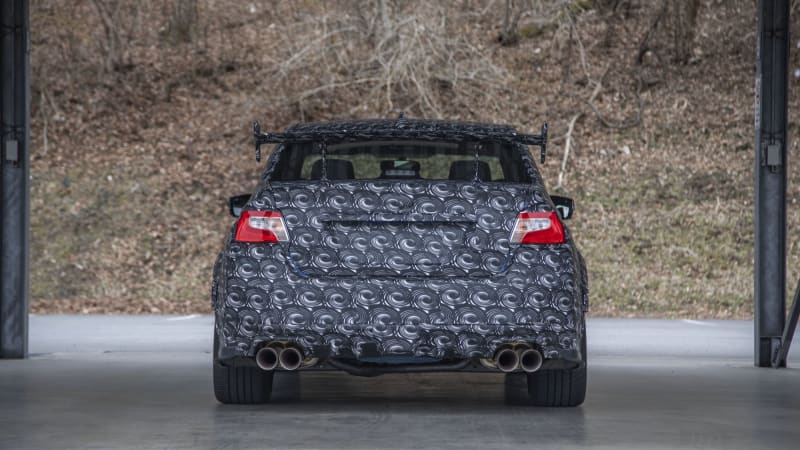 What really sets the S209 apart visually are its fender flares, which cover its wider 265/35R19 Dunlop Sport Maxx GT600A Summer tires and 19x9-inch BBS wheels. The tires are 10mm wider than the S208s and 20mm wider than the tires on the RA. The rear flares are plastic, but the fronts are steel and stamped into the S209's unique front fenders along with small functional vents to ease underhood temperatures.

New brake pads with more bite and improved fade resistance are also installed by STI. Stiffer Bilstein dampers are paired with springs with 18 lbs of additional rate, and solid pillow ball rear suspension bushings increase response. The steering is the same as the U.S.-spec WRX STI and RA with a 13.3:1 ratio. STI thinks the S208's 11:1 ratio is too quick and darty for America's higher interstate speeds.

To stiffen the body, STI adds flexible front and rear strut tower braces, which add rigidity, but also have a damping effect that STI says helps keep the S209's tires planted. "We don't really care that much about comfort," says Yano. "But we do want to keep the tires on the ground for more grip."

On the track the S209 turns with more immediacy than U.S.-spec STI, and feels like it has considerably more stick. It turns in nicely on the brakes, and with its center differential in auto there's just a touch of understeer at the limit to keep it settled. 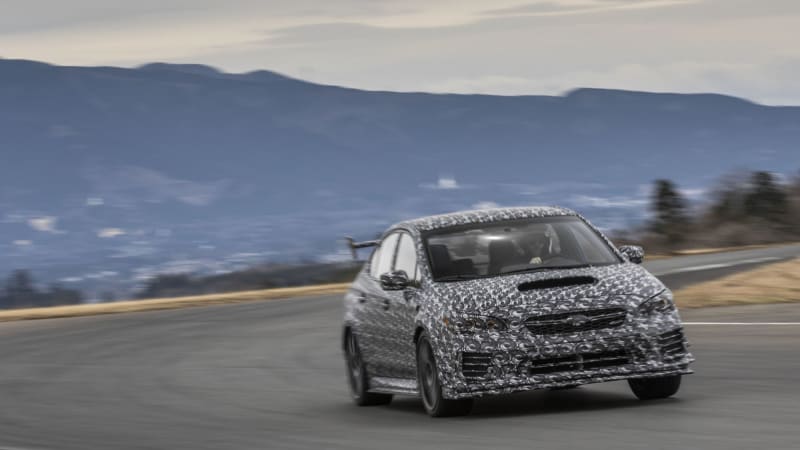 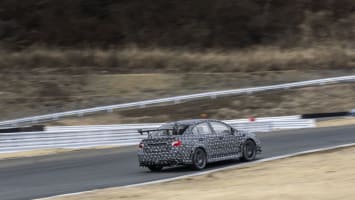 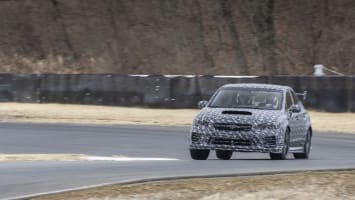 There always seems to be enough grip even if you think you've entered the corner with too much speed. It takes a neutral set on the power and never feels like it's getting away from you. The suspension is compliant over the track's tall curbing, which don't upset its balance and throw the sedan off its line.

STI says one of the goals for the S209 was to achieve a car that responds to the driver's will. It's easy to jump in and shove the car around. You get the feeling that if you had more time to learn the car and sent more power to the rear tires with the adjustable differential, you could pitch it into corners and slide it around on the power. After our three hard laps, the brakes are smoking but the pedal is still firm and the bite is still there. We take a cool down lap and pull onto pit road.

Although the Scooby crowd bought up those RAs, the car was rightly criticized for its infinitesimal performance increase – and massive price increase – over a standard STI. With the S209, Subaru and STI are about to redeem themselves. Even though the S209 will be more expensive than the RA, the limited run of 250 cars will be significantly quicker than every WRX STI that has come before, handle better, be easier to drive, and look like the king of its species with those properly bulging fender flares. And everything is better with properly bulging fender flares. America is finally getting the best WRX Subaru and STI can build, and it's going to be worth the wait.