While not a segment leader, the Altima is a comfortable, easy-to-drive sedan with desirable all-wheel-drive and turbo options.

7.5
View All Specs
MONTREAL — Among the highlights of the Nissan Altima's 2019 redesign are a new platform, new styling inside and out, and a turbocharged four-cylinder engine in place of the previous V6. But from a consumer prospective, the biggest deal is the availability of all-wheel drive, a first for the Altima and a rarity in the segment. Given the importance of the feature, we recently spent more time in the all-wheel-drive version—in a part of North America where winter is hanging on with a vengeance, the ski country north of Montreal, Canada.

All-wheel drive is available only with the base 2.5-liter engine. While one could argue that the uplevel engine, a variable-compression 2.0-liter turbo, could really use four driven wheels to put its hearty 280 lb-ft of torque to the pavement, the standard engine is the choice of the vast majority of Altima buyers. Nissan product planners saw AWD as a mass-market feature — particularly in cold-weather states — rather than a niche item to enhance the performance of the most expensive models. That's a democratic notion and also appears to be shrewd business. According to Bruce Pillard, head of marketing for the Altima, in the most recent month's sales figures nearly one in four Altima buyers chose all-wheel drive, and the take rate runs closer to 50 percent in northern states. (In Canada, the feature is standard.)

All-wheel drive is available on all five trim levels — S, SR, SV, SL, and Platinum — and the tab is $1,350. With AWD-equipped cars' anticipated higher resale value, however, the extra cost on a monthly lease can be just $15. All-wheel drive does exact a cost in fuel economy, but it's not a major one. The AWD Altima's EPA estimates are 26 mpg city and 36 highway versus 28/39 mpg for the front-drive version. The Subaru Legacy is the only other all-wheel-drive mainstream midsize sedan, and the Altima easily beats the four-cylinder Legacy's EPA estimates of 25 mpg city and 34 mpg highway (although a redesigned Legacy is on the way for 2020). 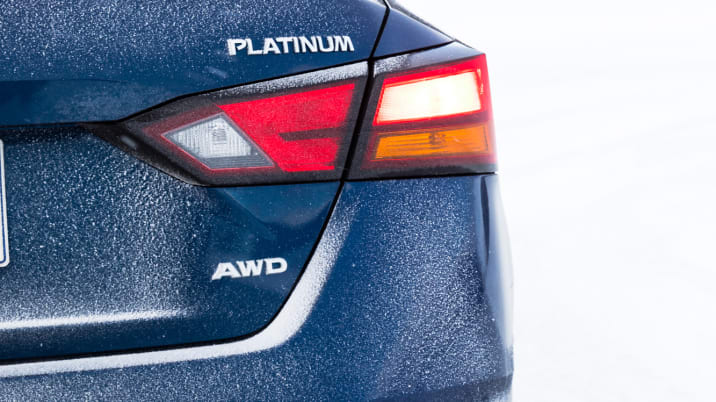 The 2.5-liter engine in the 2019 Altima is heavily redesigned compared to the 2.5-liter unit in the previous car. Nissan claims 80 percent of the parts are new or different. Output is 188 horsepower and 180 lb-ft of torque, up slightly from the old engine's 179 hp and 177 lb-ft. Nissan has long been a proponent of continuously variable automatic transmissions, and once again its CVT, called Xtronic, is the sole offering here. Despite the added weight of the all-wheel-drive system — roughly 120 pounds — this powertrain combo delivers reasonably dynamic acceleration without excessive CVT droning. As a default, the all-wheel-drive system sends 100 percent of the engine's torque to the front wheels; it's only if the system detects slippage that it reapportions up to 50 percent of the torque rearward. We drove top-spec Platinum and mid-level SV models on surfaces including dry pavement, hard-packed snow, and on an ice course, and even under hard acceleration pulling away from a stop, we didn't experience any noticeable wheelspin before the system shunted torque to the rear.

On the road, the Altima comports itself fairly well. Increased roll stiffness and decreased longitudinal stiffness are among the chassis changes for 2019, with the goals of more responsive cornering and improved ride. (The SR model offers a firmer suspension tune but, curiously, not in combination with all-wheel drive.) There's also a retuned electric power steering system, and Altima's steering is not overboosted as some Nissans are. It felt fairly precise despite the winter tires on the cars we drove. Ride quality is not bad, although the Platinum's 19-inch wheels and low-profile 235/40 rubber can make it vulnerable to severe, late-winter potholes — something we found out the hard way.

The 2019 Altima offers a higher quotient of technology, but competitors have been expanding their features as well. Commendably, forward collision warning and automatic emergency braking are standard on all models, as is a driver-alertness monitor. Blind-spot monitoring and rear cross-traffic alert require stepping up one level to the SR, while the next-up SV (and higher trims) get rear automatic emergency braking as well as Nissan's ProPilot Assist, which includes adaptive cruise control and lane centering. 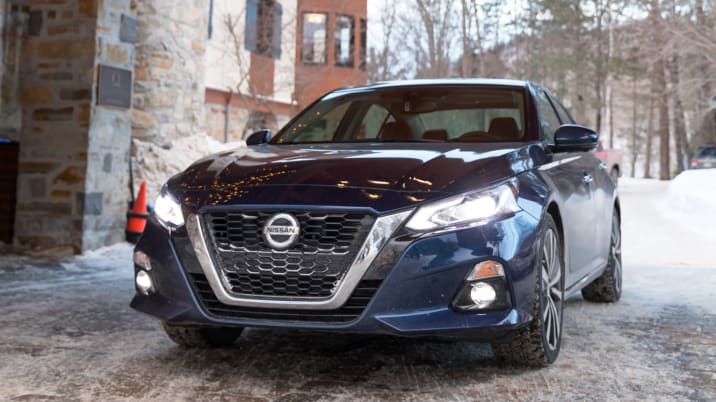 The new Altima's exterior design is more expressive than before, while avoiding the polarizing weirdness of the Maxima. Inside, form follows function, which makes for a comfortable environment with controls that are easy to use. A low cowl and narrow A-pillars afford great outward visibility, and the cabin feels wide and airy. Rear-seat space is also generous, with plenty of room for a six-footer to sit behind a six-foot driver. The Platinum model we drove was nicely trimmed throughout, while the SV had more grained plastic, particularly on the center console. Hat tip to the simple, mechanical shift lever — these are increasingly rare as manufacturers switch to awkward and unintuitive electronic shifters, dials or pushbuttons. The climate controls are a mix of physical buttons and knobs, and the audio system includes knobs for volume and tuning. The 8-inch touchscreen features logical menus and standard Apple CarPlay and Android Auto. You may want to use a phone-based map program since we found the in-car navigation to be not too smart at finding points of interest and the voice-recognition function to be laughably bad — although the latter situation is hardly uncommon. What is uncommon is all-wheel drive among midsize sedans, and for buyers who value the feature, it provides a reason to choose the Altima over the otherwise superior Toyota Camry and Honda Accord. Facing off against the only other all-wheel-drive midsize sedan, the Subaru Legacy, the Altima's chief advantage is fuel economy, although it also has a slight edge in power and torque.

The base-model Legacy is less expensive at $23,430 to the Nissan's $25,995, but equipment levels aren't quite the same. Both come standard with forward collision warning, automatic emergency braking, and adaptive cruise control, but the Subaru also includes lane-departure warning and lane-keep assist. The Nissan, on the other hand, throws in a power driver's seat and an 8" touchscreen with a superior interface. Subaru requires climbing up one rung to the Legacy Premium ($25,580) to ditch the manual driver's seat and 6.5" screen. The Legacy being in the last year of its current generation while the Altima is in its first may give the Nissan a boost in near-term resale value, although Subaru has historically been strong in that area. Mostly, the arrival of an AWD Altima gives Snow Belt shoppers an alternative to Subaru that they didn't have before, and with the cars so closely matched, it means buyers will not be totally beholden to their local Subaru dealer. Whether it pulls anyone out of crossovers and back into generally better-handling and more-economical sedans remains to be seen.

Note: A Nissan engineer mistakenly informed us that the SR's Sport driving mode altered the default torque split, but the company advised us that this is not the case. The above piece has been edited to reflect Nissan's clarification.