Jeep will offer Renegade and Compass PHEVs for 2020

At up to 240 horsepower, these bode well for the Alfa Tonale

Jeep has unveiled plug-in hybrid versions of the Renegade and Compass crossovers at the Geneva Motor Show. Combined with a 1.3-liter turbo engine, the new powertrain gives the models electrified AWD, or e-AWD.

Thanks to the hybrid boost, the crossovers get a nice helping of performance. There's now 190 to 240 horsepower, meaning the Renegade and Compass PHEV reach 62 mph in around 7 seconds. In full electric mode, there's 31 miles of range, and the electric top speed is over 80 mph. CO2 emissions are said to be lower than 50 g/km.

Jeep also mentions how the instant electric torque helps the crossovers' off-road capabilities. They have all-wheel-drive, but it's realized without a physical propshaft, rather engaged electrically.

And since the Renegade rides on the Small Wide FCA platform and the Compass on the long-wheelbase version of the same platform, we'd strongly expect the freshly revealed Alfa Romeo Tonale concept to be a platform sibling, as all three would be made in Italy. Alfa Romeo stated the Tonale's production version would be a PHEV, meaning that it's likely to utilize the same hybrid powertrain as seen in the electrified Jeeps; that would put the Giorgio platform rumors into bed. And 240 hp also bodes well for the sporty performance credentials that are crucial for Alfa.

Precise market availability or launch date for the Renegade PHEV and Compass PHEV wasn't disclosed, but 2020 is unlikely to be far from the truth, as they look that production ready. In October, FCA stated the Renegade PHEV would appear in early 2020. 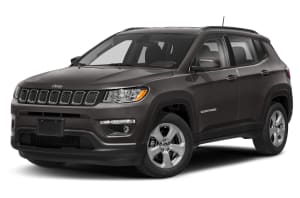